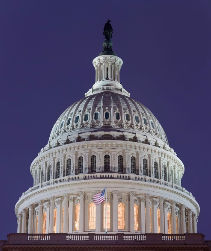 It is no secret that American citizens have a low opinion of Congress as a legislative body.  Just look at the historical rates as collected by Gallup. Despite these dismal numbers, members of Congress enjoy a high rate of incumbent re-election.  It’s generally around 90% in the House and seldom less than 80% in the Senate.  In this week’s post, do some research and try to explain why, despite low approval numbers, incumbent members of Congress are almost always re-elected.

All federal justices serve lifetime tenure.  The basis for this idea is best expressed by Alexander Hamilton in Federalist Papers No. 78.  Do you agree with Hamilton?  Was he correct in claiming the Court is the “least dangerous branch”? Should there be term limits for justices? Defend your argument.

Basics of American Politics by Lumen Learning is licensed under a Creative Commons Attribution 4.0 International License, except where otherwise noted.