Basketball is one of the highest-paying professional sports. There is stratification even among teams. For example, the Minnesota Timberwolves hand out the lowest annual payroll, while the Los Angeles Lakers reportedly pay the highest. Kobe Bryant, a Lakers shooting guard, is one of the highest paid athletes in the NBA, earning around $30.5 million a year (Forbes 2014). Even within specific fields, layers are stratified and members are ranked.

In sociology, even an issue such as NBA salaries can be seen from various points of view. Functionalists will examine the purpose of such high salaries, while conflict theorists will study the exorbitant salaries as an unfair distribution of money. Social stratification takes on new meanings when it is examined from different sociological perspectives—functionalism, conflict theory, and symbolic interactionism.

In sociology, the functionalist perspective examines how society’s parts operate. According to functionalism, different aspects of society exist because they serve a needed purpose. What is the function of social stratification?

In 1945, sociologists Kingsley Davis and Wilbert Moore published the Davis-Moore thesis, which argued that the greater the functional importance of a social role, the greater must be the reward. The theory posits that social stratification represents the inherently unequal value of different work. Certain tasks in society are more valuable than others. Qualified people who fill those positions must be rewarded more than others.

According to Davis and Moore, a firefighter’s job is more important than, for instance, a grocery store cashier’s. The cashier position does not require the same skill and training level as firefighting. Without the incentive of higher pay and better benefits, why would someone be willing to rush into burning buildings? If pay levels were the same, the firefighter might as well work as a grocery store cashier. Davis and Moore believed that rewarding more important work with higher levels of income, prestige, and power encourages people to work harder and longer.

Davis and Moore stated that, in most cases, the degree of skill required for a job determines that job’s importance. They also stated that the more skill required for a job, the fewer qualified people there would be to do that job. Certain jobs, such as cleaning hallways or answering phones, do not require much skill. The employees don’t need a college degree. Other work, like designing a highway system or delivering a baby, requires immense skill.

In 1953, Melvin Tumin countered the Davis-Moore thesis in “Some Principles of Stratification: A Critical Analysis.” Tumin questioned what determined a job’s degree of importance. The Davis-Moore thesis does not explain, he argued, why a media personality with little education, skill, or talent becomes famous and rich on a reality show or a campaign trail. The thesis also does not explain inequalities in the education system or inequalities due to race or gender. Tumin believed social stratification prevented qualified people from attempting to fill roles (Tumin 1953). For example, an underprivileged youth has less chance of becoming a scientist, no matter how smart she is, because of the relative lack of opportunity available to her. The Davis-Moore thesis also does not explain why a basketball player earns millions of dollars a year when a doctor who saves lives, a soldier who fights for others’ rights, and a teacher who helps form the minds of tomorrow will likely not make millions over the course of their careers.

The Davis-Moore thesis, though open for debate, was an early attempt to explain why stratification exists. The thesis states that social stratification is necessary to promote excellence, productivity, and efficiency, thus giving people something to strive for. Davis and Moore believed that the system serves society as a whole because it allows everyone to benefit to a certain extent.

Many conflict theorists draw on the work of Karl Marx. During the nineteenth-century era of industrialization, Marx believed social stratification resulted from people’s relationship to production. People were divided by a single line: they either owned factories or worked in them. In Marx’s time, bourgeois capitalists owned high-producing businesses, factories, and land, as they still do today. Proletariats were the workers who performed the manual labor to produce goods. Upper-class capitalists raked in profits and got rich, while working-class proletariats earned skimpy wages and struggled to survive. With such opposing interests, the two groups were divided by differences of wealth and power. Marx saw workers experience deep alienation, isolation and misery resulting from powerless status levels (Marx 1848). Marx argued that proletariats were oppressed by the money-hungry bourgeois.

Today, while working conditions have improved, conflict theorists believe that the strained working relationship between employers and employees still exists. Capitalists own the means of production, and a system is in place to make business owners rich and keep workers poor. According to conflict theorists, the resulting stratification creates class conflict. If he were alive in today’s economy, as it recovers from a prolonged recession, Marx would likely have argued that the recession resulted from the greed of capitalists, satisfied at the expense of working people.

In most communities, people interact primarily with others who share the same social standing. It is precisely because of social stratification that people tend to live, work, and associate with others like themselves, people who share their same income level, educational background, or racial background, and even tastes in food, music, and clothing. The built-in system of social stratification groups people together. This is one of the reasons why it was rare for a royal prince like England’s Prince William to marry a commoner. 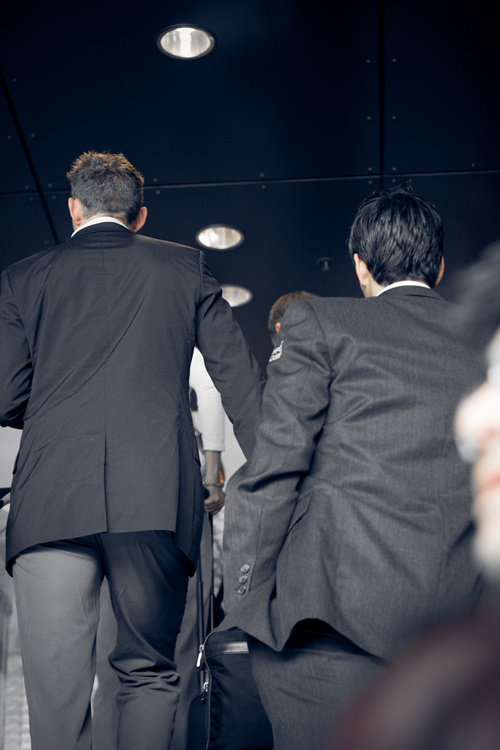 To symbolically communicate social standing, people often engage in conspicuous consumption, which is the purchase and use of certain products to make a social statement about status. Carrying pricey but eco-friendly water bottles could indicate a person’s social standing. Some people buy expensive trendy sneakers even though they will never wear them to jog or play sports. A $17,000 car provides transportation as easily as a $100,000 vehicle, but the luxury car makes a social statement that the less expensive car can’t live up to. All these symbols of stratification are worthy of examination by an interactionist.

The basic premise of the Davis-Moore thesis is that the unequal distribution of rewards in social stratification:

Unlike Davis and Moore, Melvin Tumin believed that, because of social stratification, some qualified people were _______ higher-level job positions.

Which statement represents stratification from the perspective of symbolic interactionism?

Conflict theorists view capitalists as those who:

Consider social stratification from the symbolic interactionist perspective. How does social stratification influence the daily interactions of individuals? How do systems of class, based on factors such as prestige, power, income, and wealth, influence your own daily routines, as well as your beliefs and attitudes? Illustrate your ideas with specific examples and anecdotes from your own life and the lives of people in your community.

Theoretical Perspectives on Social Stratification by OpenStaxCollege is licensed under a Creative Commons Attribution 4.0 International License, except where otherwise noted.