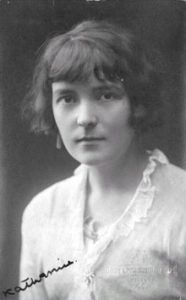 Katherine Mansfield, one of New Zealand’s most famous writer, was closely associated with D.H. Lawrence and something of a rival of Virginia Woolf. Mansfield’s creative years were burdened with loneliness, illness, jealousy, alienation, all of which is reflected in her work with the bitter depiction of marital and family relationships of her middle-class characters. Her short stories are also notable for their use of stream of consciousness. Like the Russian writer Anton Chekhov, Mansfield depicted trivial events and subtle changes in human behaviour.

Katherine Mansfield was born in Wellington, New Zealand, into a middle-class colonial family. Her father, Harold Beauchamp, was a banker, and her mother, Annie Burnell Dyer, was of genteel origins. She lived for six years in the rural village of Karori. Later in life Mansfield said, “I imagine I was always writing. Twaddle it was, too. But better far write twaddle or anything, anything, than nothing at all.” At the age of nine, she had her first story published. Entitled “Enna Blake,” it appeared in The High School Reporter in Wellington, with the editor’s comment that it “shows promise of great merit.”

As a first step to her rebellion against her background, she moved to London in 1903 and studied at Queen’s College, where she joined the staff of the College Magazine. Returning to New Zealand in 1906, she took up music and became an accomplished cellist, but her father denied her the opportunity to become a professional musician. During this time, she had romantic affairs with both men and women.

In 1908, she studied typing and bookkeeping at Wellington Technical College. Her lifelong friend Ida Baker (known as “L.M.” or “Leslie Moore” in her diary and correspondence) persuaded Mansfield’s father to allow Katherine to move back to England with an allowance of £100 a year. There she devoted herself to writing. Mansfield never visited New Zealand again.

After an unhappy marriage in 1909 to George Brown, whom she left a few days after the wedding, Mansfield toured for a while as an extra in opera. Before the marriage she had had an affair with Garnett Trowell, a musician, and became pregnant. In Bavaria, where Mansfield spent some time, she suffered a miscarriage. During her stay in Germany, she wrote satirical sketches of German characters, which were published in 1911 under the title In a German Pension. Earlier her stories had appeared in The New Age. On her return to London, Mansfield became ill with an untreated sexually transmitted disease she contracted from Floryan Sobieniowski, a condition which contributed to her weak health for the rest of her life. Sobieniowski was a Polish émigré translator whom she met in Germany. Her first story published in England was “The Child-Who-Was-Tired,” which was about an overworked nursemaid who kills a baby.

Mansfield attended literary parties without much enthusiasm: “Pretty rooms and pretty people, pretty coffee, and cigarettes out of a silver tankard… I was wretched.” Always outspoken, she was once turned out of an omnibus (a horse-drawn bus) after calling another woman a whore; the woman had declared that all suffragettes ought to be trampled to death by horses. In 1911, she met John Middleton Murry, a socialist and former literary critic, who was first a tenant in her flat, then her lover. Until 1914 she published stories in Rhythm and The Blue Review. During the war, she travelled restlessly between England and France. After her brother “Chummie”died in World War I, Mansfield focused her writing on New Zealand and her family, and “Prelude” (1916), one of her most famous stories, comes from this period. After divorcing her first husband in 1918, Mansfield married Murry. In the same year, she was found to have tuberculosis.

Mansfield and Murry were closely associated with D.H. Lawrence and his wife Frieda. Upon learning that Murry had an affair with the Princess Bibesco (née Asquith), Mansfield objected not to the affair but to her letters to Murry. In a letter to the princess, she wrote: “I am afraid you must stop writing these love letters to my husband while he and I live together. It is one of the things which is not done in our world.”

Her last years Mansfield spent in southern France and in Switzerland, seeking relief from tuberculosis. As a part of her treatment in 1922 at an institute, Mansfield had to lie a few hours every day on a platform suspended over a cow manger. She breathed odours emanating from below, but the treatment did no good. Without the company of her literary friends, family, or her husband, she wrote much about her own roots and her childhood. Mansfield died of a pulmonary hemorrhage on January 9, 1923, in Gurdjieff Institute, near Fontainebleau, France. Her last words were: “I love the rain. I want the feeling of it on my face.”

Mansfield’s family memoirs were collected in Bliss (1920). Only three volumes of Mansfield’s stories were published during her lifetime. “Miss Brill” is about a woman who enjoys the beginning of the “season.” She goes to her “special” seat with her fur. She had taken it out of its box in the afternoon, shaken off the moth-powder, and given it a brush. She feels that she has a part in the play in the park, and somebody will notice if she isn’t there. A couple sits near her. The girl laughs at her fur and the man says: “Why does she come here at all – who wants her? Why doesn’t she keep her silly old mug at home?” Miss Brill hurries back home, unclasps the neckpiece quickly, and puts it in the box. “But when she put the lid on she thought she heard something crying.”

In “The Garden Party” (1921), an extravagant garden party is arranged on a beautiful day. Laura, the daughter of the party’s hostess, hears of the accidental death of a young local working-class man, Mr. Scott, who lived in the neighbourhood. Laura wants to cancel the party, but her mother refuses to understand. She fills a basket with sandwiches, cakes, pastries, and other food, goes to the widow’s house, and sees the dead man in the bedroom where he is lying. “He was wonderful, beautiful. While they were laughing and while the band was playing, this marvel had come to the lane.” Crying she tells her brother, who is looking for her: “‘It was simply marvellous. But, Laurie –’ She stopped, she looked at her brother. ‘Isn’t life,’ she stammered, ‘isn’t life –’ But what life was she couldn’t explain. No matter. He quite understood.”

Mansfield was greatly influenced by Anton Chekov, sharing his warm humanity and attention to small details of human behaviour. Her influence on the development of the modern short story was also notable. Among her literary friends were Aldous Huxley, Virginia Woolf, who considered her overpraised, and D.H. Lawrence, who later turned against Murry and her. Mansfield’s journal, letters, and scrapbook were edited by her husband, who ignored her wish that he should “tear up and burn as much as possible” of the papers she left behind her.