A 4 digit PIN is selected. What is the probability that there are no repeated digits?

To have no repeated digits, all four digits would have to be different, which is selecting without replacement. We could either compute 10 × 9 × 8 × 7, or notice that this is the same as the permutation 10P4 = 5040.

In a certain state’s lottery, 48 balls numbered 1 through 48 are placed in a machine and six of them are drawn at random. If the six numbers drawn match the numbers that a player had chosen, the player wins $1,000,000. In this lottery, the order the numbers are drawn in doesn’t matter. Compute the probability that you win the million-dollar prize if you purchase a single lottery ticket.

In the state lottery from the previous example, if five of the six numbers drawn match the numbers that a player has chosen, the player wins a second prize of $1,000. Compute the probability that you win the second prize if you purchase a single lottery ticket.

A multiple-choice question on an economics quiz contains 10 questions with five possible answers each. Compute the probability of randomly guessing the answers and getting 9 questions correct.

Compute the probability of randomly drawing five cards from a deck and getting exactly one Ace.

In many card games (such as poker) the order in which the cards are drawn is not important (since the player may rearrange the cards in his hand any way he chooses); in the problems that follow, we will assume that this is the case unless otherwise stated. Thus we use combinations to compute the possible number of 5-card hands, 52C5. This number will go in the denominator of our probability formula, since it is the number of possible outcomes.

Putting this all together, we have

Compute the probability of randomly drawing five cards from a deck and getting exactly two Aces.

The solution is similar to the previous example, except now we are choosing 2 Aces out of 4 and 3 non-Aces out of 48; the denominator remains the same:

It is useful to note that these card problems are remarkably similar to the lottery problems discussed earlier.

Compute the probability of randomly drawing five cards from a deck of cards and getting three Aces and two Kings.

Let’s take a pause to consider a famous problem in probability theory:

Suppose you have a room full of 30 people. What is the probability that there is at least one shared birthday?

Take a guess at the answer to the above problem. Was your guess fairly low, like around 10%? That seems to be the intuitive answer (30/365, perhaps?). Let’s see if we should listen to our intuition. Let’s start with a simpler problem, however.

and then subtract from 1 to get

This is a pretty small number, so maybe it makes sense that the answer to our original problem will be small. Let’s make our group a bit bigger.

Suppose five people are in a room. What is the probability that there is at least one shared birthday among these five people?

Continuing the pattern of the previous example, the answer should be

Note that we could rewrite this more compactly as

which makes it a bit easier to type into a calculator or computer, and which suggests a nice formula as we continue to expand the population of our group.

Suppose 30 people are in a room. What is the probability that there is at least one shared birthday among these 30 people?

Here we can calculate

which gives us the surprising result that when you are in a room with 30 people there is a 70% chance that there will be at least one shared birthday!

If you like to bet, and if you can convince 30 people to reveal their birthdays, you might be able to win some money by betting a friend that there will be at least two people with the same birthday in the room anytime you are in a room of 30 or more people. (Of course, you would need to make sure your friend hasn’t studied probability!) You wouldn’t be guaranteed to win, but you should win more than half the time.

This is one of many results in probability theory that is counterintuitive; that is, it goes against our gut instincts. If you still don’t believe the math, you can carry out a simulation. Just so you won’t have to go around rounding up groups of 30 people, someone has kindly developed a Java applet so that you can conduct a computer simulation. Go to this web page, and once the applet has loaded, select 30 birthdays and then keep clicking Start and Reset. If you keep track of the number of times that there is a repeated birthday, you should get a repeated birthday about 7 out of every 10 times you run the simulation.

Suppose 10 people are in a room. What is the probability that there is at least one shared birthday among these 10 people? 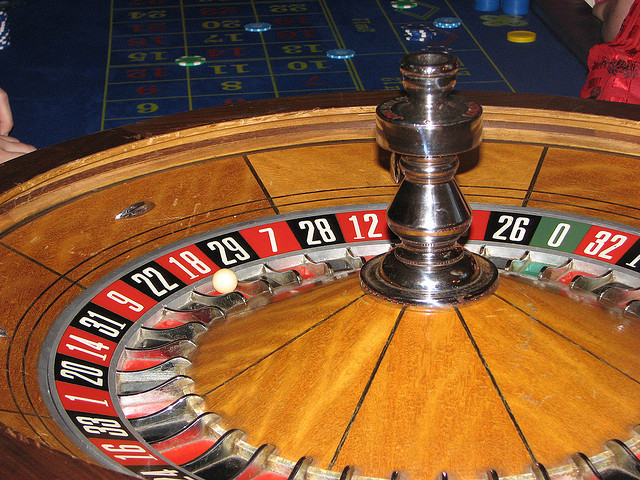 Expected value is perhaps the most useful probability concept we will discuss. It has many applications, from insurance policies to making financial decisions, and it’s one thing that the casinos and government agencies that run gambling operations and lotteries hope most people never learn about.

In the casino game roulette, a wheel with 38 spaces (18 red, 18 black, and 2 green) is spun. In one possible bet, the player bets $1 on a single number. If that number is spun on the wheel, then they receive $36 (their original $1 + $35). Otherwise, they lose their $1. On average, how much money should a player expect to win or lose if they play this game repeatedly?

We call this average gain or loss the expected value of playing roulette. Notice that no one ever loses exactly 5.3 cents: most people (in fact, about 37 out of every 38) lose $1 and a very few people (about 1 person out of every 38) gain $35 (the $36 they win minus the $1 they spent to play the game).

Summarizing these along with the values, we get this table:

Expected Value is the average gain or loss of an event if the procedure is repeated many times.

We can compute the expected value by multiplying each outcome by the probability of that outcome, then adding up the products.

You purchase a raffle ticket to help out a charity. The raffle ticket costs $5. The charity is selling 2000 tickets. One of them will be drawn and the person holding the ticket will be given a prize worth $4000. Compute the expected value for this raffle.

In a certain state’s lottery, 48 balls numbered 1 through 48 are placed in a machine and six of them are drawn at random. If the six numbers drawn match the numbers that a player had chosen, the player wins $1,000,000. If they match 5 numbers, then win $1,000. It costs $1 to buy a ticket. Find the expected value.

Our probabilities and outcome values are:

The expected value, then is:

On average, one can expect to lose about 90 cents on a lottery ticket. Of course, most players will lose $1.

In general, if the expected value of a game is negative, it is not a good idea to play the game, since on average you will lose money. It would be better to play a game with a positive expected value (good luck trying to find one!), although keep in mind that even if the average winnings are positive it could be the case that most people lose money and one very fortunate individual wins a great deal of money. If the expected value of a game is 0, we call it a fair game, since neither side has an advantage.

Not surprisingly, the expected value for casino games is negative for the player, which is positive for the casino. It must be positive or they would go out of business. Players just need to keep in mind that when they play a game repeatedly, their expected value is negative. That is fine so long as you enjoy playing the game and think it is worth the cost. But it would be wrong to expect to come out ahead.

A friend offers to play a game, in which you roll 3 standard 6-sided dice. If all the dice roll different values, you give him $1. If any two dice match values, you get $2. What is the expected value of this game? Would you play?

According to the estimator at numericalexample.com, a 40-year-old man in the US has a 0.242% risk of dying during the next year. An insurance company charges $275 for a life-insurance policy that pays a $100,000 death benefit. What is the expected value for the person buying the insurance?

The probabilities and outcomes are

Not surprisingly, the expected value is negative; the insurance company can only afford to offer policies if they, on average, make money on each policy. They can afford to pay out the occasional benefit because they offer enough policies that those benefit payouts are balanced by the rest of the insured people.

For people buying the insurance, there is a negative expected value, but there is a security that comes from insurance that is worth that cost.

Introduction to College Mathematics by Lumen Learning is licensed under a Creative Commons Attribution 4.0 International License, except where otherwise noted.