So much of what the average person knows, or thinks they know, about the medieval era (the Middle Ages) comes from film and TV. When I polled a group of well-educated friends on Facebook, they told me that the word “medieval” called to mind Monty Python and the Holy Grail, Blackadder,The Sword in the Stone, lusty wenches, feasting, courtly love, the plague, jousting, and chain mail. And also cathedrals, manuscripts, monasteries, feudalism, monks, and friars.

Petrarch, an Italian poet and scholar of the fourteenth century, famously referred to the period of time between the fall of the Roman Empire (circa 476) and his own day (circa 1330s) as the Dark Ages.

Petrarch believed that the Dark Ages was a period of intellectual darkness due to the loss of the classical learning, which he saw as light. Later historians picked up on this idea and ultimately the term Dark Ages was transformed into Middle Ages. Broadly speaking, the Middle Ages is the period of time in Europe between the end of antiquity in the fifth century and the Renaissance, or rebirth of classical learning, in the fifteenth and sixteenth centuries.

Characterizing the Middle Ages as a period of darkness falling between two greater, more intellectually significant periods in history is misleading. The Middle Ages was not a time of ignorance and backwardness, but rather a period during which Christianity flourished in Europe. Christianity, and specifically Catholicism in the Latin West, brought with it new views of life and the world that rejected the traditions and learning of the ancient world.

Not So Dark After All

During this time, the Roman Empire slowly fragmented into many smaller political entities. The geographical boundaries for European countries today were established during the Middle Ages. This was a period that heralded the formation and rise of universities, the establishment of the rule of law, numerous periods of ecclesiastical reform and the birth of the tourism industry. Many works of medieval literature, such as the Canterbury Tales, the Divine Comedy, and The Song of Roland, are widely read and studied today.

The visual arts prospered during Middles Ages, which created its own aesthetic values. The wealthiest and most influential members of society commissioned cathedrals, churches, sculpture, painting, textiles, manuscripts, jewelry and ritual items from artists. Many of these commissions were religious in nature but medieval artists also produced secular art. Few names of artists survive and fewer documents record their business dealings, but they left behind an impressive legacy of art and culture.

Unlike Western Europe in the Middle Ages, the Byzantine Empire is not romanticized in television and film. In the medieval West, the Roman Empire fragmented, but in the Byzantine East, it remained a strong, centrally-focused political entity. Byzantine emperors ruled from Constantinople, which they thought of as the New Rome. Constantinople housed Hagia Sophia, the world’s largest church until 1520, and was a major center of artistic production. 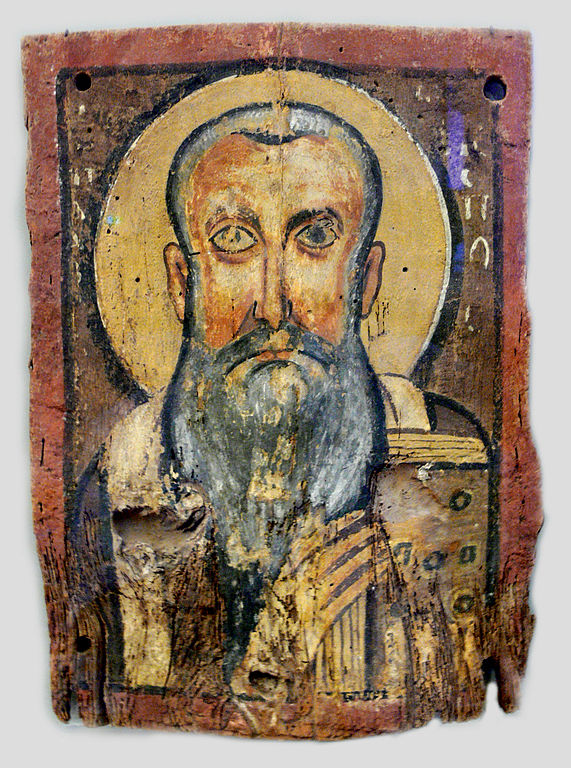 The Byzantine Empire experienced two periods of Iconoclasm (730-787 and 814-842), when images and image-making were problematic. Iconoclasm left a visible legacy on Byzantine art because it created limits on what artists could represent and how those subjects could be represented.

The beginnings of an identifiable Christian art can be traced to the end of the second century and the beginning of the third century. Considering the Old Testament prohibitions against graven images, it is important to consider why Christian art developed in the first place. The use of images will be a continuing issue in the history of Christianity. The best explanation for the emergence of Christian art in the early church is due to the important role images played in Greco-Roman culture.

As Christianity gained converts, these new Christians had been brought up on the value of images in their previous cultural experience and they wanted to continue this in their Christian experience. For example, there was a change in burial practices in the Roman world away from cremation to inhumation. Outside the city walls of Rome, adjacent to major roads, catacombs were dug into the ground to bury the dead. Families would have chambers or cubicula dug to bury their members. Wealthy Romans would also have sarcophagi or marble tombs carved for their burial. The Christian converts wanted the same things. Christian catacombs were dug frequently adjacent to non-Christian ones, and sarcophagi with Christian imagery were apparently popular with the richer Christians.

Junius Bassus, a Roman praefectus urbi or high ranking government administrator, died in 359 C.E. Scholars believe that he converted to Christianity shortly before his death accounting for the inclusion of Christ and scenes from the Bible. (Photograph above shows a plaster cast of the original.)

Themes of Death and Resurrection (Borrowed from the Old Testament)

A striking aspect of the Christian art of the third century is the absence of the imagery that will dominate later Christian art. We do not find in this early period images of the Nativity, Crucifixion, or Resurrection of Christ, for example. This absence of direct images of the life of Christ is best explained by the status of Christianity as a mystery religion. The story of the Crucifixion and Resurrection would be part of the secrets of the cult.

While not directly representing these central Christian images, the theme of death and resurrection was represented through a series of images, many of which were derived from the Old Testament that echoed the themes. For example, the story of Jonah—being swallowed by a great fish and then after spending three days and three nights in the belly of the beast is vomited out on dry ground—was seen by early Christians as an anticipation or prefiguration of the story of Christ’s own death and resurrection. Images of Jonah, along with those of Daniel in the Lion’s Den, the Three Hebrews in the Firey Furnace, Moses Striking the Rock, among others, are widely popular in the Christian art of the third century, both in paintings and on sarcophagi.

One can imagine that early Christians—who were rallying around the nascent religious authority of the Church against the regular threats of persecution by imperial authority—would find great meaning in the story of Moses of striking the rock to provide water for the Israelites fleeing the authority of the Pharaoh on their exodus to the Promised Land.

Early Representations of Christ and the Apostles

An early representation of Christ found in the Catacomb of Domitilla shows the figure of Christ flanked by a group of his disciples or students. Those experienced with later Christian imagery might mistake this for an image of the Last Supper, but instead this image does not tell any story. It conveys rather the idea that Christ is the true teacher.

Christ draped in classical garb holds a scroll in his left hand while his right hand is outstretched in the so-called ad locutio gesture, or the gesture of the orator. The dress, scroll, and gesture all establish the authority of Christ, who is placed in the center of his disciples. Christ is thus treated like the philosopher surrounded by his students or disciples.

Comparably, an early representation of the apostle Paul, identifiable with his characteristic pointed beard and high forehead, is based on the convention of the philosopher, as exemplified by a Roman copy of a late fourth century B.C.E. portrait of the fifth century B.C.E. playwright Sophocles.

Many of Europe’s medieval cathedrals are museums in their own right, housing fantastic examples of craftsmanship and works of art. Additionally, the buildings themselves are impressive. Although architectural styles varied from place to place, building to building, there are some basic features that were fairly universal in monumental churches built in the Middle Ages, and the prototype for that type of building was the Roman basilica.

In ancient Rome, the basilica was created as a place for tribunals and other types of business. The building was rectangular in shape, with the long, central portion of the hall made up of the nave. Here the interior reached its fullest height. The nave was flanked on either side by a colonnade that delineated the side aisles, which were of a lower height than the nave. Because the side aisles were lower, the roof over this section was below the roofline of the nave, allowing for windows near the ceiling of the nave. This band of windows was called the clerestory. At the far end of the nave, away from the main door, was a semi-circular extension, usually with a half-dome roof. This area was the apse, and is where the magistrate or other senior officials would hold court.
Because this plan allowed for many people to circulate within a large, and awesome, space, the general plan became an obvious choice for early Christian buildings. The religious rituals, masses, and pilgrimages that became commonplace by the Middle Ages were very different from today’s services, and to understand the architecture it is necessary to understand how the buildings were used and the components that made up these massive edifices.

Although medieval churches are usually oriented east to west, they all vary slightly. When a new church was to be built, the patron saint was selected and the altar location laid out. On the saint’s day, a line would be surveyed from the position of the rising sun through the altar site and extending in a westerly direction. This was the orientation of the new building. The entrance foyer is called the narthex, but this is not found in all medieval churches. Daily access may be through a door on the north or south side. The largest, central, western door may have been reserved for ceremonial purposes.

Inside, you should imagine the interior space without the chairs or pews that we are used to seeing today. Unlike in a Roman basilica, the side aisles run behind a series of arches rather than columns. In very extensive buildings there may be two side aisles, with the ceiling of the outer one lower than the one next to the nave. This hierarchy of size and proportion extended to the major units of the plan – the bays. A bay is the square unit in the arcade defined by a vault, the section supported by consecutive pillars. Typically, the width of the nave was equal to two bays. The vault is the arched roof or ceiling, or a section of it.

The major arcade at the ground floor is topped by a second arcade, called the gallery, which is topped by the clerestory or a third arcade level. The arcade just below the clerestory is called the triforium. The nave was used for the procession of the clergy to the altar. The main altar was basically in the position of the basilican apse, although in some designs it is further forward. The area around the altar – the choir or chancel – was reserved for the clergy or monks, who performed services throughout the day.

The cathedrals and former monastery churches are much larger than needed for the local population. They expected and received numerous pilgrims who came to various shrines and altars within the church where they might pray to a supposed piece of the true cross, or a bone of a martyr, or the tomb of a king. The pilgrims entered the church and found their way to the chapel or altar of their desire—therefore, the side aisles made an efficient path for pilgrims to come and go without disrupting the daily services.

Development of this plan over time shows that very soon the apse was elongated, adding more room to the choir. Additionally, the termini of the aisles developed into small wings themselves, known as transepts. These were also extended, providing room for more tombs, more shrines, and more pilgrims.