Dada was an art movement of the European avant-garde in the early 20th century, with early centers in Zürich, Switzerland and in New York. Developed in reaction to World War I, the Dada movement consisted of artists who rejected the logic, reason, and aestheticism of modern capitalist society, instead expressing nonsense, irrationality, and anti-bourgeois protest in their works. The art of the movement spanned visual, literary, and sound media, including collage, sound poetry, cut-up writing, and sculpture. Dadaist artists expressed their discontent with violence, war, and nationalism, and maintained political affinities with the radical left.

The roots of Dada lay in pre-war avant-garde. The term anti-art, a precursor to Dada, was coined by Marcel Duchamp around 1913 to characterize works which challenge accepted definitions of art. Cubism and the development of collage and abstract art would inform the movement’s detachment from the constraints of reality and convention. The work of French poets, Italian Futurists and the German Expressionists would influence Dada’s rejection of the tight correlation between words and meaning. 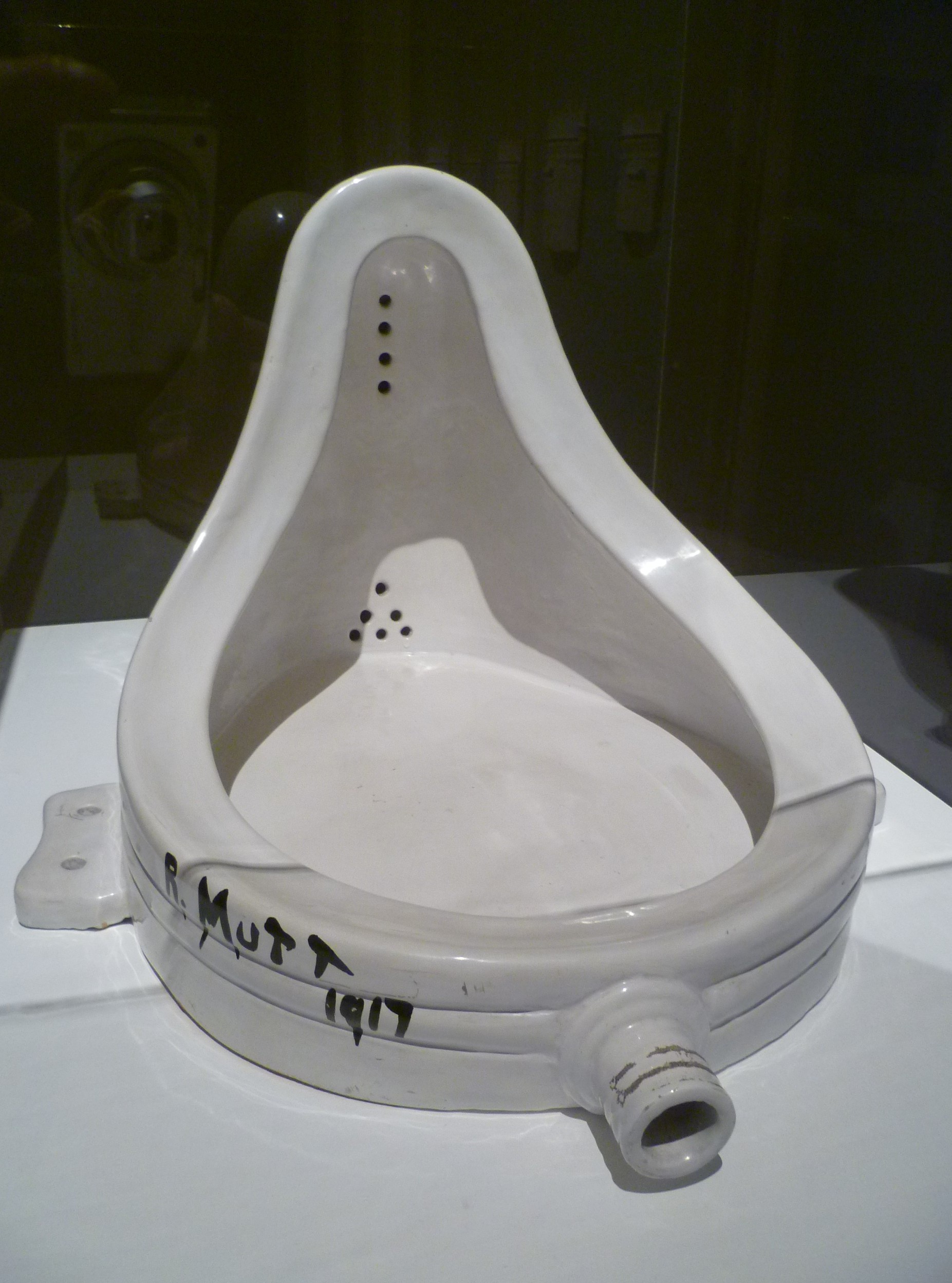 Perhaps the most famous work of Dada art is Marcel Duchamp’s Fountain, one of his “readymades” (everyday objects found or purchased and declared art) such as a bottle rack, and was active in the Society of Independent Artists. In 1917 he submitted the now famous Fountain, a urinal signed R. Mutt, to the Society of Independent Artists exhibition only to have the piece rejected. First an object of scorn within the arts community, the Fountain has since become almost canonized by some as one of the most recognizable modernist works of sculpture. Art world experts polled by the sponsors of the 2004 Turner Prize, Gordon’s gin, voted it “the most influential work of modern art.” As recent scholarship documents, the work is likely more collaborative than it has been given credit for in twentieth-century art history. Duchamp indicates in a 1917 letter to his sister that a female friend was centrally involved in the conception of this work. As he writes: “One of my female friends who had adopted the pseudonym Richard Mutt sent me a porcelain urinal as a sculpture.”

One of the most important and subversive movements of the twentieth century, Surrealism flourished particularly in the 1920s and 1930s and provided a radical alternative to the rational and formal qualities of Cubism. Unlike Dada, from which in many ways it sprang, it emphasized the positive, rather than the pessimistic rejection of earlier traditions.

Surrealism sought access to the subconscious and to translate this flow of thought into terms of art. Originally a literary movement, it was famously defined by the poet André Breton in the First Manifesto of Surrealism (1924):

SURREALISM, noun, masc. Pure psychic automatism by which it is intended to express either verbally or in writing the true function of thought. Thought dictated in the absence of all control exerted by reason, and outside all aesthetic or moral preoccupations.

A number of distinct strands can be discerned in the visual manifestation of Surrealism. Artists such as Max Ernst and André Masson favoured automatism in which conscious control is suppressed and the subconscious is allowed to take over. Conversely, Salvador Dali and René Magritte pursued an hallucinatory sense of super-reality in which the scenes depicted make no real sense. A third variation was the juxtaposition of unrelated items, setting up a startling unreality outside the bounds of normal reality.

Common to all Surrealistic enterprises was a post-Freudian desire to set free and explore the imaginative and creative powers of the mind. Surrealism was originally Paris based. Its influence spread through a number of journals and international exhibitions, the most important examples of the latter being the International Surrealist Exhibition at the New Burlington Galleries, London and the Fantastic Art Dada, Surrealism at the Museum of Modern Art, New York, both held in 1936.

With the outbreak of the Second World War, the centre of Surrealist activity transferred to New York and by the end of the War the movement had lost its coherence. It has retained a potent influence, however, clearly evident in aspects of Abstract Expressionism and various other artistic manifestations of the second half of the twentieth century.