Each writer has his/her own preferences when drafting a document. Whether a person is writing a story, a poem, a journal entry, a letter, or a creative non-fiction piece, the writing approach is idiosyncratic, meaning that it is distinctive to the person who is writing.

Other writers are write-write writers. They write, cut, copy, and reorganize their work as well as throw away and start again—sometimes multiple times. They are constantly prewriting, planning, and revising as they go. They sometimes struggle with finishing a final draft, and they have even been known to delete some of their best work. These writers need to remember to save all drafts, so that the best work is never lost. See Figure 1.2 for a list of  advantages and disadvantages of being an extreme write-write writer.

Figure 1.2: Advantages and Disadvantages for the Write-write Writers 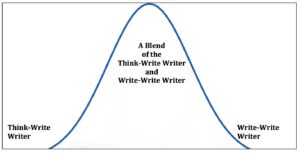 Every piece of writing goes through a process of stages: prewriting (also sometimes called planning), drafting, cooling, revising, and publishing. These steps do not always follow one another in succession. Instead, they are recursive, meaning a step can occur again at any point in the process. For instance, while revising an historically-based short story, a writer may discover he/she needs to do additional research about the time period that the story is set, which takes the writer back to the prewriting stage. See Figure 1.4. 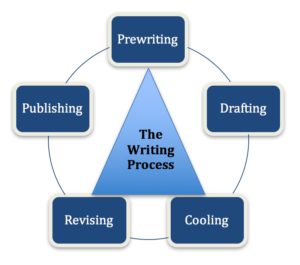 Prewriting writing begins with what draws the writer to write. The writer may be inspired by nature, people, animals, life events, etc.

Some writers keep a writing journal, a record of lists and notes, maybe even drawings or photographs, that initially caught their attention. Writers generally are strong observers who record what they see, hear, taste, touch, and smell because it may become part of a story, a poem, a non-fiction essay, a play, etc. Writers may carry a small notebook with them throughout the day and set it on the nightstand next to their bed at night. Then, it is readily available when an idea–an inspiration–grabs their attention.

Writers make several decisions in the prewriting stage as well. They will answer questions like the following:

Drafting involves writing the first draft of a document. Some writers write their first draft with a pen and a notebook. Other writers write directly on a laptop or computer. The choice depends on the preference of the writer.

Cooling means setting aside the document, at least 24-48 hours before revising begins for short pieces of work. This allows writers to have a break from the content and a new perspective when entering the revision stage. To do this, writers need to be organized and time managers. The first draft must be done early enough to set it aside for the recommended cooling time.

Authors of books have even longer cooling periods. It may be weeks, months, and sometimes even years, depending on the writer’s preference and the deadline for the publication of the book.

Revising literally means “to see again” not just once but multiple times. Revision has two types of processes:

Although it’s great to see one’s name in print, not all writers write for publication. Some write their stories, poems, letters, diaries, etc. for the next generations – their children, grandchildren, and great-grandchildren. They write to record their personal history.

Introduction to Creative Writing by Lumen Learning is licensed under a Creative Commons Attribution 4.0 International License, except where otherwise noted.