Fiction is make-believe, invented stories. They may be short stories, fables, vignettes, plays, novellas, or novels. Although writers may base a character on people they have met in real life, the characters and the experiences that the character faces in the story are not real.

So, how does a writer write fiction? Characters, setting, plot, conflict, point of view, and theme are six key elements for writing fiction.

Characters are the people, animals, or aliens in the story. Readers come to know the characters through what they say, what they think, and how they act.

E. M. Forster, an English novelist, identified that characters are either flat or round. Flat characters do not play important roles in the stories. They often have only one or two traits with little description about them. A flat character may even be a stock character, which is a stereotypical figure that is easily recognized by readers, for example, the mad scientist or the evil stepmother.

On the other hand, the round characters play an important role, often the lead roles in stories. They are complex, dimensional, and well-developed. The stories are about them; therefore, pages of writing will be about them. They often change by going through a life-changing experience as the story unfolds.

If writers write about characters outside their own culture, they need to do research so as not to misrepresent a particular culture. The same is also true of characters, who have illnesses. The writer may need to research the illness and treatment for it in order to be accurate about it.

Setting is where and when the story takes place. It includes the following:

Setting can function as a main force that the characters encounter, such as a tornado or flood, or a setting can play a minor role such as setting the mood. Often times, the setting can reveal something about the main character as he/she functions in that place and time period.

Writers write about places they are familiar with. If they aren’t familiar with the place, then they need to research it in order to be accurate about the place.

Plot is the order of events in the story. The plot usually follows a particular structure called Freytag’s Pyramid. Gustav Freytag, a German playwright who lived during the 1800s, identified this structure. 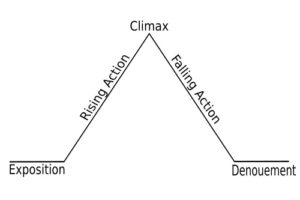 Exposition is an introduction to the characters, time, and the problem. At the point where exposition moves into rising action a problem, sometimes called an inciting incident, occurs for the main character to handle or solve. This creates the beginning of the story.

Climax is the turning point in the story. Usually, it is a single event with the greatest intensity and uncertainty. The main character must contend with the problem at this point.

Falling action includes the events that unfold after the climax. This usually creates an emotional response from the reader.

Denouement or resolution provides closure to the story. It ties up loose ends in the story.

Do writers plan out their stories? Some do, especially if they are an extreme think-write writer.  Some don’t. They have a story idea, begin it, and watch it unfold as they write.

Conflict is the struggle between two entities. In story writing the main character, also known as the protagonist, encounters a conflict with the antagonist, which is an adversary. The conflict may be one of six kinds:

Stories are generally told in one of two points of views:

A theme is not the plot of the story. It is the underlying truth that is being conveyed in the story. Themes can be universal, meaning they are understood by readers no matter what culture or country the readers are in. Common themes include coming of age, circle of life, prejudice, greed, good vs. evil, beating the odds, etc.

Introduction to Creative Writing by Lumen Learning is licensed under a Creative Commons Attribution 4.0 International License, except where otherwise noted.