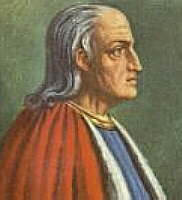 Although born at Aosta in Alpine Italy and educated in Normandy, Anselm became a Benedictine monk, teacher, and abbot at Bec and continued his ecclesiastical career in England. Having been appointed the second Norman archbishop of Canterbury in 1093, Anselm secured the Westminster Agreement of 1107, guaranteeing the (partial) independence of the church from the civil state.

In a series of short works such as De Libertate Arbitrii (On Free Will), De Casu Diaboli (The Fall of the Devil), and the lengthier dialogue Cur Deus Homo (Why God became Man), Anselm propounded a satisfaction theory of the atonement, upon which the incarnation promises relief from the strict demands of divine justice. He defended a notion of the relation between philosophy and theology that, like Augustine‘s, emphasized the methodological priority of faith over reason, since truth is to be achieved only through “fides quaerens intellectum” (“faith seeking understanding”).

Anselm’s combination of Christianity, neoplatonic metaphysics, and Aristotelean logic in the form of dialectical question-and-answer was an important influence in the development scholasticism during the next several centuries.

As a philosopher, Anselm is most often remembered for his attempts to prove the existence of god: In De Veritate (Of Truth) he argued that all creatures owe their being and value to god as the source of all truth, to whom a life lived well is the highest praise. In the Monologion he described deity as the one most truly good thing, from which all real moral values derive and whose existence is required by the reality of those values.

Most famously, in the Proslogion (Addition), Anselm proposed the famous Ontological Argument, according to which god is understood as “aliquid quod maius non cogitari potest” (“that than which nothing greater can be conceived”). The being so conceived must necessarily exist in reality as well as in thought, he argued, since otherwise it would in fact be possible to conceive something greater—namely, something exactly simliar except that it really does exist. Thus, at least for Anselmian believers guided by a prior faith, god must truly exist as the simple, unified source of all perfections, a reality that excludes corruption, imperfection, and deception of every sort.