I would more easily believe that (a) Yankee professor would lie than that stones would fall from heaven. — Thomas Jefferson, 1808

Most meteoritic material that strikes the Earth’s atmosphere does not make it to the surface to be recovered. The meteor burns up, or if it makes it to the surface, falls into water, since Earth is a water surface planet.

There is more gold mined each year than the total amount of meteorites found in all collections – museums, universities, and private collections. So, how does one recognize if a rock is potentially a meteorite?

The three major groups or classes of meteorites, based on their make-up:

Stones or Stony Meteorites
These are composed of silicates and other materials. Most stony meteorites contain metal in the form of iron and nickel. Plus, stone meteorites are by far the most common type; some 94&percnt; of recovered meteorites are stony. Stone meteorites also include very rare types of meteorites, including lunar, Martian, and possibly even comets.
Iron meteorites, or Irons
These are composed of iron (Fe) and nickel (Ni), with some cobalt (Co) and other trace elements and minerals. Iron is the predominant metal, and the type of Iron meteorite depends on the ratio of iron to nickel. No Earth rock has iron and nickel in combination. Thus a ‘rock’ recovered with iron and nickel together is a meteorite. Irons are very dense meteorites, in comparison to stony meteorites.
Stony Irons
As the name indicates, they are a combination of iron and stony meteorite properties and the rarest type or class of meteorite.
Tektites
Very dry glasses, and are hypothesized to be meteoritic splash from a large impact. The meteorite strikes Earth, and soil is blown up into the air, almost back into space. Yet, the escape velocity is not high enough, so the now-molten material re-enters and lands, found as the glassy material found in specific areas on Earth. 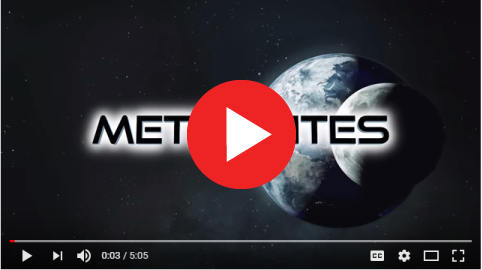 Rocks which are not meteorites are referred to as meteorwrongs by those who work in the field. People often find an unusual-looking rock and think it is a meteorite. After testing, which will include the four steps noted and/or chemical testing, many of these are meteorwrongs.

Astronomy Lab by Lumen Learning is licensed under a Creative Commons Attribution 4.0 International License, except where otherwise noted.