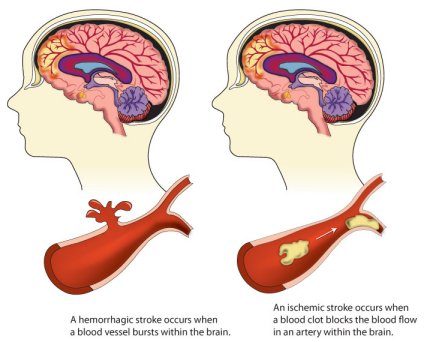 The main types of stroke are:

Blood clots often cause the blockages that lead to ischemic strokes.

A hemorrhagic stroke occurs when an artery in the brain leaks blood or ruptures (breaks open). The leaked blood puts too much pressure on brain cells, which damages them.

High blood pressure and aneurysms—balloon-like bulges in an artery that can stretch and burst—are examples of conditions that can cause a hemorrhagic stroke.

There are two types of hemorrhagic strokes:

A transient ischemic attack (TIA) is sometimes called a “mini-stroke.” It is different from the major types of stroke because blood flow to the brain is blocked for only a short time—usually no more than 5 minutes.

It is important to know that:

Recognizing and treating TIAs can reduce the risk of a major stroke. If you have a TIA, your health care team can find the cause and take steps to prevent a major stroke.