Theories of learning assert that there is an optimal level of arousal (stress) that we all try to maintain.  If we are under-aroused, we become bored and will seek out some sort of stimulation.  On the other hand, if we are over-aroused, we will engage in behaviors to reduce our arousal/stress.  Research shows that moderate arousal is generally best; when arousal (stress) is very high or very low, performance tends to suffer.  The Yerkes–Dodson law is an empirical relationship between arousal and performance, originally developed by psychologists Robert M. Yerkes and John Dillingham Dodson in 1908.  The law dictates that performance increases with physiological or mental arousal, but only up to a point.  When levels of arousal become too high, performance decreases.  The process is often illustrated graphically as a bell-shaped curve which increases and then decreases with higher levels of arousal. 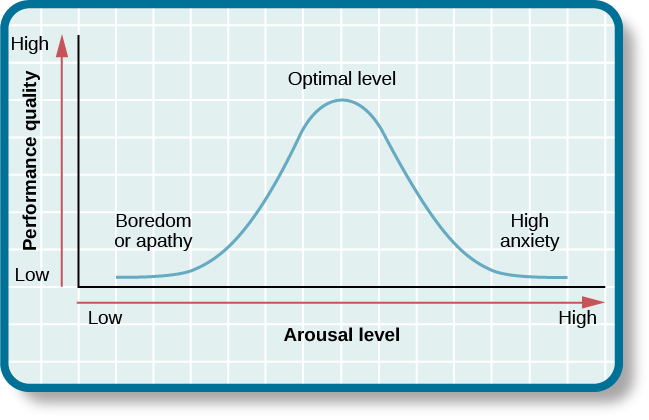 Most students have experienced this need to maintain optimal levels of arousal (stress) over the course of their academic career.  Think about how much stress students experience toward the end of spring semester—they feel overwhelmed with work and yearn for the rest and relaxation of summer break.  Their arousal/stress level may be too high.  Once they finish the semester, however, it doesn’t take too long before they begin to feel bored; their arousal level is too low and their level of performance or productivity is also typically lower.  Generally, by the time fall semester starts, many students are ready to return to school.  This is an example of how arousal theory works.