A major problem with the Articles of Confederation was the inability to adapt and change without unanimous consent. The framers learned this lesson well. One of the strengths they built into the Constitution was the ability to amend it to meet the nation’s needs and address concerns or structural elements they had not anticipated.

Since ratification in 1789, the Constitution has changed only 27 times. The first 10 amendments were added in 1791. Responding to charges by anti-federalists that the Constitution made the national government too powerful and provided no protections for the rights of individuals, the newly elected federal government tackled the issue of guaranteeing liberties for American citizens. James Madison, a member of Congress from Virginia, took the lead in drafting nineteen potential changes to the Constitution.

Madison followed the procedure outlined in Article V that says amendments can originate from one of two sources. First, they can be proposed by Congress and approved by a two-thirds majority in both the House and the Senate before being sent to the legislatures in all the states. If three-quarters of state legislatures vote to approve an amendment, it becomes part of the Constitution. A second method allows for the petitioning of Congress by the states: Upon receiving such petitions from two-thirds of the states, Congress must call a convention for the purpose of proposing amendments, which would then be forwarded to the states for ratification by the required three-quarters. All the current Constitutional amendments were created using the first method.

Having drafted nineteen proposed amendments, Madison submitted them to Congress. Only twelve were approved by two-thirds of both the Senate and the House of Representatives and sent to the states for ratification. Of these, only ten were accepted by three-quarters of the state legislatures. In 1791, these first ten amendments were added to the Constitution and became known as the Bill of Rights.

The ability to change the Constitution has made it a flexible document. Framers made amending the document sufficiently difficult that it has not been changed repeatedly; only seventeen amendments have been added since the ratification of the first ten (one of these, the Twenty-Seventh Amendment, was among Madison’s rejected nine proposals).

How has the contract changed? 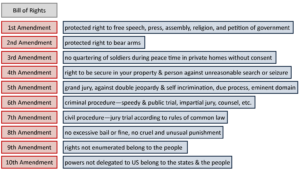 The Bill of Rights was intended to quiet the fears of anti-federalists that the Constitution did not adequately protect individual liberties and thus encourage their support of the new national government. Many of the first ten amendments were based on provisions of the English Bill of Rights and the Virginia Declaration of Rights. For example, the right to bear arms for protection, the right to refuse shelter and provision for soldiers in peacetime, the right to a trial by jury, and protection against cruel and unusual punishment are taken from the English Bill of Rights. The Fifth Amendment, that people cannot be deprived of their life, liberty, or property except by a legal proceeding, was greatly influenced by English law as well as the protections granted to Virginians in the Virginia Declaration of Rights.

Learn more about the formal process of amending the Constitution and view exhibits related to the passage of specific amendments at the National Archives website.

The protections for religion, speech, press, and assembly did not exist under English law–the right to petition the government did, however. The prohibition in the First Amendment against the establishment of an official church differed significantly from both English precedent and the practice of several states. The Fourth Amendment, protecting Americans from unwarranted search and seizure of their property, was also new.

The Ninth and Tenth Amendments were intended to provide yet another assurance that people’s rights would be protected and that the national government would not become too powerful. The Ninth Amendment guarantees that liberties extend beyond those described in the preceding documents. This was an important acknowledgment that the protected rights were extensive, and the government should not attempt to interfere with them. The Supreme Court, for example, has held that the Ninth Amendment protects the right to privacy even though none of the preceding amendments explicitly mentions this right. The Tenth Amendment, one of the first submitted to the states for ratification, ensures that states possess all powers not explicitly assigned to the national government by the Constitution. This guarantee protected states’ reserved powers to regulate things like marriage, divorce, intrastate transportation, and commerce, as well as passing laws affecting education, public health, and safety.

Of the later amendments only one, the Twenty-First, repealed another amendment, the Eighteenth, which had prohibited the manufacture, import, export, distribution, transportation, and sale of alcoholic beverages. Other amendments rectify problems that have arisen over the years or that reflect changing times. For example, the Seventeenth Amendment, ratified in 1913, gave voters the right to directly elect U.S. senators. The Twentieth Amendment, which was ratified in 1933 during the Great Depression, moved the date of the presidential inauguration from March to January. In a time of crisis, like a severe economic depression, the president needed to take office almost immediately after being elected. The Twenty-Second Amendment, added in 1955, limits the president to two terms in office, and the Twenty-Seventh Amendment, first submitted for ratification in 1789, regulates the implementation of laws regarding salary increases or decreases for members of Congress.

Of the remaining amendments, four are of especially great significance. The Thirteenth Amendment abolished slavery in the United States. The Fourteenth Amendment granted citizenship and equal protection under the law regardless of race. It also prohibited states from depriving their residents of life, liberty, or property without a legal proceeding. Over the years, the Fourteenth Amendment has been used to require states to protect most of the same freedoms granted by the Bill of Rights.

After many years of campaigns for suffrage, the Nineteenth Amendment finally gave women the right to vote in 1920 after a tie vote in Tennessee.  A 24-year old representative (Harry Burn, a Republican) cast the tie-breaking vote after a little push from his mother. (National Archives excerpt)

Subsequent amendments further extended the suffrage. The Twenty-Third Amendment (1961) allowed residents of Washington, DC to vote for the president. The Twenty-Fourth Amendment (1964) abolished the use of poll taxes. Many southern states had used a poll tax, a tax placed on voting, to prevent poor persons from voting. The last extension of the suffrage occurred in 1971 in the midst of the Vietnam War. The Twenty-Sixth Amendment reduced the voting age from twenty-one to eighteen. Many people complained that the young people who were serving in Vietnam should have the right to vote for or against those making decisions that might literally meant life or death. Other amendments have been proposed, including an amendment to guarantee equal rights to women, but all have failed.

The liberties of U.S. citizens are protected by the Bill of Rights, but potential or perceived threats to these freedoms arise constantly. This is especially true regarding First Amendment rights. Read about some of these threats at the American Civil Liberties Union (ACLU) website and let people know how you feel about these issues or check out American Center for Law and Justice (ACLJ) at http://aclj.org/news.

The Eleventh Amendment is extremely complicated from the judicial perspective, with federal courts taking multiple paths for interpretation of the language. Essentially, it deals with the issue of sovereign immunity (Is the government immune from prosecution?).  Most attorneys understand that suits in the federal court system are more likely to achieve impartial results rather than suits filed against a state within the state’s system.

The Twelfth Amendment supersedes clause 3 of § 1 of Article II of the Constitution. According to the Article II, Section 1 of the Constitution, if two candidates each received a majority of the electoral votes but are tied, the House of Representatives would determine which one would be President. Therefore, the decision rested with the lame duck, federalist-controlled House of Representatives. Thirty-five ballots were cast over five days but neither candidate received a majority. Many federalists saw Jefferson as their principal foe, whose election was to be avoided at all costs. But Alexander Hamilton, a well-respected Federalist Party leader, hated Burr and advised Federalists in Congress that Jefferson was the safer choice. Finally, on February 17, 1801, on the thirty-sixth ballot, the House elected Thomas Jefferson to be President. The tie vote between Jefferson and Burr in the 1801 Electoral College pointed out problems with the electoral system. The framers of the Constitution had not anticipated such a tie nor had they considered the possibility of the election of a President or Vice President from opposing factions – which had been the case in the 1796 election. In 1804, the passage of the 12th Amendment corrected these problems by providing for separate Electoral College votes for President and Vice President. (excerpt from the National Archives)

In 1909 progressives in Congress again attached a provision for an income tax to a tariff bill. Conservatives, hoping to kill the idea for good, proposed a constitutional amendment enacting such a tax; they believed an amendment would never receive ratification by three-fourths of the states. Much to their surprise, the amendment was ratified by one state legislature after another, and on February 25, 1913, with the certification by Secretary of State Philander C. Knox, the Sixteenth Amendment took effect. Yet in 1913, due to generous exemptions and deductions, less than 1 percent of the population paid income taxes at the rate of only 1 percent of net income. This document settled the constitutional question of how to tax income and, by so doing, effected dramatic changes in the American way of life.[1]

The possibility of amending the Constitution helped ensure its ratification, although many feared the powerful federal government it created would deprive them of their rights. To allay their anxieties, the framers promised that a Bill of Rights safeguarding individual liberties would be added following ratification. These ten amendments were formally added to the document in 1791 and other amendments followed over the years.One of the problems with the Articles of Confederation was the difficulty of changing it. To prevent this difficulty from recurring, the framers provided a method for amending the Constitution that required a two-thirds majority in both houses of Congress and in three-quarters of state legislatures to approve a change.

Bill of Rights–the first ten amendments to the U.S. Constitution; most were designed to protect fundamental rights and liberties