Under the Articles of Confederation, there was no national judiciary. The Constitution changed that, but Article III, which addresses “the judicial power of the United States,” is the shortest and least detailed of the three articles creating branches of government. Article III calls for creation of “one supreme Court” and establishes the Court’s jurisdiction (its authority to hear cases and make decisions) and the types of cases the Court may hear.

The rest of the development of the judicial system and the creation of the lower courts were left in the hands of Congress.

To add further explanation to Article III, Alexander Hamilton discussed details about the federal/national judiciary in Federalist No. 78.

[…] In unfolding the defects of the existing Confederation, the utility and necessity of a federal judicature have been clearly pointed out […]

The complete independence of the courts of justice is peculiarly essential in a limited Constitution. By a limited Constitution, I understand one which contains certain specified exceptions to the legislative authority; such, for instance, as that it shall pass no bills of attainder (trial by legislature), no ex-post-facto laws (after the fact), and the like. Limitations of this kind can be preserved in practice no other way than through the medium of courts of justice, whose duty it must be to declare all acts contrary to the manifest tenor of the Constitution void. Without this, all the reservations of particular rights or privileges would amount to nothing […emphasis added]

No legislative act, therefore, contrary to the Constitution, can be valid. To deny this, would be to affirm, that the deputy is greater than his principal; that the servant is above his master; that the representatives of the people are superior to the people themselves; that men acting by virtue of powers, may do not only what their powers do not authorize, but what they forbid […]

That inflexible and uniform adherence to the rights of the Constitution, and of individuals, which we perceive to be indispensable in the courts of justice, can certainly not be expected from judges who hold their offices by a temporary commission. Periodical appointments, however regulated, or by whomsoever made, would, in some way or other, be fatal to their necessary independence. If the power of making them was committed either to the Executive or legislature, there would be danger of an improper complaisance to the branch which possessed it; if to both, there would be an unwillingness to hazard the displeasure of either; if to the people, or to persons chosen by them for the special purpose, there would be too great a disposition to consult popularity, to justify a reliance that nothing would be consulted but the Constitution and the laws […]

In explaining the importance of an independent judiciary separated from the other branches of government, Hamilton said “interpretation” was a key role of the courts as they seek to protect people from unjust laws. But he also believed “the Judiciary Department” would “always be the least dangerous” because “with no influence over either the sword or the purse,” it had “neither force nor will, but merely judgment.” The courts were to make decisions–not take action. With no control over how those decisions would be implemented and no power to enforce their choices, they could exercise only judgment, and their power would begin and end there.

The judicial branch finds its place as chief interpreter of the Constitution and the equal of the other two branches, though still checked and balanced by them. Appointment of judges and justices at the national level provides an independent judiciary–a result of indirect populist control (elected individuals nominate and affirm judges/justices).

The first session of the first U.S. Congress laid the framework for today’s national judicial system, established in the Judiciary Act of 1789. Although legislative changes over the years have altered it, the basic structure of the judicial branch remains–at the lowest level are the district courts, where federal cases involving national laws are tried, witnesses testify, and evidence and arguments are presented. A losing party unhappy with a district court decision may appeal to the circuit courts, or U.S. courts of appeal, where the decision of the lower court is reviewed. Still further, appeal to the U.S. Supreme Court is possible, but of the thousands of petitions for appeal, the Supreme Court will typically hear fewer than one hundred each year.[1]

This public site maintained by the Administrative Office of the U.S. Courts provides detailed information from and about the judicial branch.

How did the new judiciary get started?

Starting in New York in 1790, the early Supreme Court focused on establishing its rules and procedures.

It took years for the Court to establish its interpreter position, and it faced a number of setbacks on the way. In their first case of significance, Chisholm v. Georgia (1793), the justices ruled that the federal courts could hear cases brought by a citizen of one state against a citizen of another state, and that Article III, Section 2, of the Constitution did not protect the states from facing such an interstate lawsuit.[2]

The decision was almost immediately overturned by the Eleventh Amendment, passed by Congress in 1794 and ratified by the states in 1795. In protecting the states, the Eleventh Amendment put a prohibition on the courts by stating, “The Judicial power of the United States shall not be construed to extend to any suit in law or equity, commenced or prosecuted against one of the United States by Citizens of another State, or by Citizens or Subjects of any Foreign State.” It was an early hint that Congress had the power to change the jurisdiction of the courts as it saw fit–checks and balances in action.

In an atmosphere of perceived weakness, the first chief justice John Jay, an author of The Federalist Papers and appointed by President George Washington, resigned his post to become Governor of New York.  He later declined President John Adams’s offer of a subsequent term.[3]

In fact, the Court might have remained in a state of what Hamilton called its “natural feebleness” if not for the man who filled the vacancy Jay had refused—the fourth chief justice, John Marshall. Often credited with defining the modern court, clarifying its power, and strengthening its role, Marshall served in the chief’s position for thirty-four years. One landmark case during his tenure changed the course of the judicial branch’s history.

In 1803, the Supreme Court declared for itself the power of judicial review, a power that Hamilton referred to but is not expressly mentioned (enumerated) in the Constitution. Judicial review is the power of the courts, as part of the system of checks and balances, to look at actions taken by the other branches of government and the states and determine whether they are constitutional. If the courts find an action to be unconstitutional, it becomes null and void. Judicial review was established in the Supreme Court case Marbury v. Madison when for the first time, the Court declared an act of Congress to be unconstitutional.[4] Marshall defined this power as the “very essence of judicial duty,” and it continues today as one of the most significant aspects of judicial power. Judicial review lies at the core of the court’s ability to check the other branches of government—and the states.

Since Marbury, the power of judicial review has continually expanded, and the Court has not only ruled actions of Congress and the president to be unconstitutional, but it has also extended its power to include the review of state and local actions. Judicial review is not confined to the Supreme Court but is also exercised by the lower federal courts and even the state courts. Any legislative or executive action at the federal or state level inconsistent with the U.S. Constitution or a state constitution can be subject to judicial review.[5]

The Supreme Court found itself in the middle of a dispute between the outgoing presidential administration of John Adams and that of incoming president (and opposition party member) Thomas Jefferson. It was an interesting circumstance at the time, particularly because Jefferson and the man who would decide the case—John Marshall—were themselves political rivals.

President Adams had appointed William Marbury to a position in Washington, DC, but his commission was not delivered before Adams left office. Marbury petitioned the Supreme Court to use its power under the Judiciary Act of 1789 and issue a writ of mandamus (mandate, command, compel an action) to force the new president’s secretary of state James Madison to deliver the commission documents. Madison refused. A unanimous Court under the leadership of Chief Justice John Marshall ruled that although Marbury was entitled to the job, the Court did not have the power to issue the writ and order Madison to deliver the documents, because the provision in the Judiciary Act giving the Court that power was unconstitutional.[6]

Perhaps Marshall feared a confrontation with the Jefferson administration and thought Madison would refuse his directive anyway. In any case, his ruling shows an interesting contrast in the early Court. The Court declined a power—issuing a writ of mandamus—given to it by Congress; however, it laid the foundation for legitimizing a much more important power—judicial review. Marbury never got his commission, but the Court’s ruling in the case has become more significant for the precedent it established.

As Marshall put it, “it is emphatically the province and duty of the judicial department to say what the law is.”[7] The United States has a common law system in which law is largely developed through binding judicial decisions. With roots in medieval England, the system was inherited by the American colonies along with many other British traditions.[8]

In their role as policymakers, Congress and the President tend to consider broad questions of public policy and their costs and benefits. The courts consider specific cases with narrower questions, enabling them to focus more closely than other government institutions on the exact context of the individuals, groups, or issues affected by the decision. While the legislature can make policy through statute/law, and the executive can form policy through regulations and administration based upon constitutionally delegated power or legislative authority, the judicial branch can also influence policy through its rulings and interpretations. As cases are brought to the courts, court decisions shape policy.

Freedom of speech, for example, just like many constitutional concepts, has come to mean different things to different generations and the courts that have designed the lens through which we understand the Constitution in modern times. It is often said that the Constitution changes less by amendment and more by interpretation. Rather than collecting dust on a shelf, the nearly 230-year-old document has come with us into the modern age, and the accepted practice of judicial review has helped carry it along the way.

While the U.S. Supreme Court and state supreme courts exert power over many when reviewing laws or declaring acts of other branches unconstitutional, they become particularly important when an individual or group comes before them with an alleged wrong. A citizen or group that feels wronged may approach a variety of institutional venues in the U.S. system for assistance in changing policy or seeking support. Organizing protests, garnering special interest group support, and changing laws through the legislative and executive branches are all possible, but an individual is most likely to find the courts best suited to analyze the case particulars. 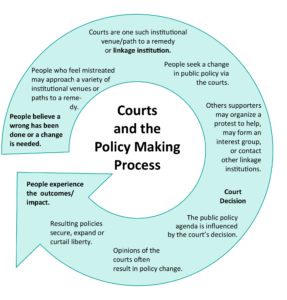 Article III–establishes a third branch of government, the judiciary

checks and balances–limitations placed on governmental power; separation into branches that oversee one another

Marbury v. Madison–the 1803 Supreme Court case that established the courts’ power of judicial review and the first time the Supreme Court ruled an act of Congress to be unconstitutional