Part of the discussion at the Constitutional Convention focused on basic governmental structures. The Declaration of Independence rejected the experience of unitary (highly centralized) government under a king.  The Articles of Confederation promoted a confederation of the states (decentralized power with a weak central government–committee style). As previously discussed, this was not as successful as the delegates hoped.  Would a third option deliver positive results? A federal system (strong central government balanced with strong independent states) could be the answer.

The real key to the American federal system is a balance of horizontal and vertical separation of power. The federal design divides powers between multiple vertical layers or levels of government—national, state, county, parish, local, special district–allowing for multiple access points for citizens.  The governments at each level check and balance one another. As an institutional design, federalism both safeguards state interests and creates a strong union led by a capable central government.

At each level of the US federal structure, power is further divided horizontally by branches–legislative, executive, judicial. 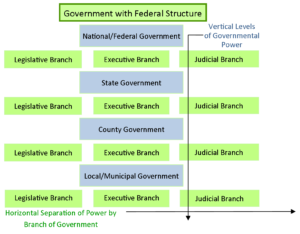 American federalism seeks to balance decentralization and centralization forces. We see decentralization when we cross state lines and encounter different taxation levels, welfare eligibility requirements, and voting regulations. Centralization is apparent with the federal government’s unique authority to print money or to offer money grants and mandates to shape state actions. State border crossings may greet us with colorful billboards, but behind them lies a complex federal design that has structured relationships between states and the national government since the late 1700s.

centralization–power is concentrated at one horizontal level of government; for example, states are not permitted to make treaties with foreign governments or coin their own money

decentralization–power is divided or shared between vertical levels of government