Good prenatal care is essential. The developing child is most at risk for some of the most severe problems during the first three months of development. Unfortunately, this is a time at which most mothers are unaware that they are pregnant. Today, we know many of the factors that can jeopardize the health of the developing child. The study of factors that contribute to birth defects is called teratology. Teratogens are factors that can contribute to birth defects which include some maternal diseases, pollutants, drugs and alcohol.

Factors influencing prenatal risks: There are several considerations in determining the type and amount of damage that might result from exposure to a particular teratogen (Berger, 2004). These include:

A look at some teratogens

One of the most commonly used teratogens is alcohol and because half of all pregnancies in the United States are unplanned, it is recommended that women of child-bearing age take great caution against drinking alcohol when not using birth control or when pregnant (Surgeon General’s Advisory on Alcohol Use During Pregnancy, 2005). Alcohol consumption, particularly during the second month of prenatal development but at any point during pregnancy may lead to neurocognitive and behavioral difficulties that can last a lifetime. Binge drinking (5 or more on a single occasion) or 7 or more drinks during a single week place a child at risk. In extreme cases, alcohol consumption can lead to fetal death but more frequently it can result in fetal alcohol spectrum disorders (FASD) (this terminology is now used when looking at the effects of exposure and replaces the term fetal alcohol syndrome. It is preferred because it recognizes that symptoms occur on a spectrum and that all individuals do not have the same characteristics.) Children with FASD share certain physical features such as flattened noses, small eye holes, and small heads, intellectual developmental delay, and behavioral problems. Those with FASD are more at risk for lifelong problems such as criminal behavior, psychiatric problems, and unemployment (CDC, 2006). The terms alcohol-related neurological disorder (ARND) and alcohol-related birth defects (ARBD) have replaced the term Fetal Alcohol Effects to refer to those with less extreme symptoms of FASD. ARBD include kidney, bone and heart problems. 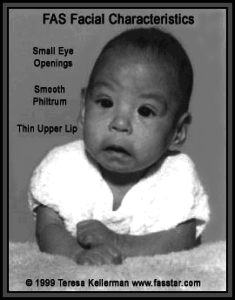 Tobacco is the second most widely used teratogen and the number of adolescent females who smoke is increasing. In fact, among adolescents, females are just as likely to smoke as are males. Tobacco use during pregnancy has been associated with low birth weight, placenta previa, preterm delivery, fetal growth restriction and sudden infant death syndrome (Center for Disease Control, 2004).

Illicit drugs as well as prescribed medications can have serious teratogenic effects. It is difficult to completely determine the effects of a particular illicit drug on a developing child because most mothers, who use, use more than one substance. However, several problems seem clear. The use of cocaine is connected with low birth weight, stillbirths and spontaneous abortion. Heavy marijuana use is associated with brain damage and mothers addicted to heroin often pass that addiction to their child. And many medications do not include adequate information on risks posed if taken during pregnancy (Center for Disease Control, 2004).

Some environmental pollutants of major concern include lead poisoning, which is connected with low birth weight and slowed neurological development. Children who live in older housing in which lead based paints have been used have been known to eat peeling paint chips thus being exposed to lead. The chemicals in certain herbicides are also potentially damaging. Radiation is another environmental hazard. If a mother is exposed to radiation, particularly during the first 3 months of pregnancy, the child may suffer some congenital deformities. There is also an increased risk of miscarriage and stillbirth. Mercury leads to physical deformities and mental retardation (Dietrich, 1999).

One of the most potentially devastating teratogens is HIV. In the United States, the fastest growing group of people with AIDS is women; globally half of all people infected with HIV are women (UNAIDS, 2005). It is estimated that between 630,000 to 820,000 children were newly infected with HIV worldwide in 2005. Most of this infection is from mother-to-child through the placenta or birth canal (Newell, 2005). There are some measures that can be taken to lower the chance the child will contract the disease (such as the use of antiretroviral drugs from 14 weeks after conception until birth, avoiding breastfeeding, and delivering the child by c-section), many women do not know they are HIV positive during pregnancy. Still others cannot afford the costly drugs used for treating AIDS.  The transmission rate of HIV from mother to child has been reduced in the United States to between 100-200 infants annually.  Go to http://www.cdc.gov/hiv/topics/perinatal/resources/factsheets/perinatal.htm to learn more.

German measles (or rubella) have been associated with a number of maladies. If the mother contracts the disease during the first three months of pregnancy, damage can occur in the eyes, ears, heart or brain of the unborn child. Deafness is almost certain if the mother has German measles before the 11th week of prenatal development and can also cause brain damage. Gonorrhea, syphilis, and Chlamydia are sexually transmitted infections that can be passed to the fetus by an infected mother; mothers should be tested as early as possible to minimize the risk of spreading these infections (Center for Disease Control, 2006).