Somewhat less open-ended than creative thinking is problem solving, the analysis and solution of tasks or situations that are complex or ambiguous and that pose difficulties or obstacles of some kind (Mayer & Wittrock, 2006). Problem solving is needed, for example, when a physician analyzes a chest X-ray: a photograph of the chest is far from clear and requires skill, experience, and resourcefulness to decide which foggy-looking blobs to ignore, and which to interpret as real physical structures (and therefore real medical concerns). Problem solving is also needed when a grocery store manager has to decide how to improve the sales of a product: should she put it on sale at a lower price, or increase publicity for it, or both? Will these actions actually increase sales enough to pay for their costs?

Example 1: Problem Solving in the Classroom

Problem solving happens in classrooms when teachers present tasks or challenges that are deliberately complex and for which finding a solution is not straightforward or obvious. The responses of students to such problems, as well as the strategies for assisting them, show the key features of problem solving. Consider this example, and students’ responses to it. We have numbered and named the paragraphs to make it easier to comment about them individually:

Scene #1: A problem to be solved

A teacher gave these instructions: “Can you connect all of the dots below using only four straight lines?” She drew the following display on the chalkboard: 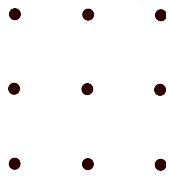 The problem itself and the procedure for solving it seemed very clear: simply experiment with different arrangements of four lines. But two volunteers tried doing it at the board, but were unsuccessful. Several others worked at it at their seats, but also without success.

When no one seemed to be getting it, the teacher asked, “Think about how you’ve set up the problem in your mind—about what you believe the problem is about. For instance, have you made any assumptions about how long the lines ought to be? Don’t stay stuck on one approach if it’s not working!”

After the teacher said this, Alicia indeed continued to think about how she saw the problem. “The lines need to be no longer than the distance across the square,” she said to herself. So she tried several more solutions, but none of them worked either.

The teacher walked by Alicia’s desk and saw what Alicia was doing. She repeated her earlier comment: “Have you assumed anything about how long the lines ought to be?”

Alicia stared at the teacher blankly, but then smiled and said, “Hmm! You didn’t actually say that the lines could be no longer than the matrix! Why not make them longer?” So she experimented again using oversized lines and soon discovered a solution: 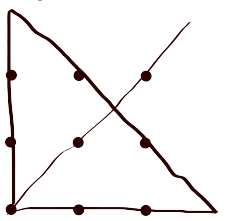 Meanwhile, Willem worked on the problem. As it happened, Willem loved puzzles of all kinds, and had ample experience with them. He had not, however, seen this particular problem. “It must be a trick,” he said to himself, because he knew from experience that problems posed in this way often were not what they first appeared to be. He mused to himself: “Think outside the box, they always tell you. . .” And that was just the hint he needed: he drew lines outside the box by making them longer than the matrix and soon came up with this solution: 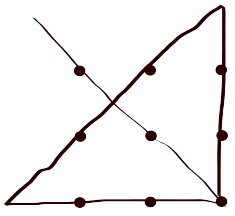 When Rachel went to work, she took one look at the problem and knew the answer immediately: she had seen this problem before, though she could not remember where. She had also seen other drawing-related puzzles, and knew that their solution always depended on making the lines longer, shorter, or differently angled than first expected. After staring at the dots briefly, she drew a solution faster than Alicia or even Willem. Her solution looked exactly like Willem’s.

Problems vary in how much information they provide for solving a problem, as well as in how many rules or procedures are needed for a solution. A well-structured problem provides much of the information needed and can in principle be solved using relatively few clearly understood rules. Classic examples are the word problems often taught in math lessons or classes: everything you need to know is contained within the stated problem and the solution procedures are relatively clear and precise. An ill-structured problem has the converse qualities: the information is not necessarily within the problem, solution procedures are potentially quite numerous, and a multiple solutions are likely (Voss, 2006). Extreme examples are problems like “How can the world achieve lasting peace?” or “How can teachers insure that students learn?”

By these definitions, the nine-dot problem is relatively well-structured—though not completely. Most of the information needed for a solution is provided in Scene #1: there are nine dots shown and instructions given to draw four lines. But not all necessary information was given: students needed to consider lines that were longer than implied in the original statement of the problem. Students had to “think outside the box,” as Willem said—in this case, literally.

When a problem is well-structured, so are its solution procedures likely to be as well. A well-defined procedure for solving a particular kind of problem is often called an algorithm; examples are the procedures for multiplying or dividing two numbers or the instructions for using a computer (Leiserson, et al., 2001). Algorithms are only effective when a problem is very well-structured and there is no question about whether the algorithm is an appropriate choice for the problem. In that situation it pretty much guarantees a correct solution. They do not work well, however, with ill-structured problems, where they are ambiguities and questions about how to proceed or even about precisely what the problem is about. In those cases it is more effective to use heuristics, which are general strategies—“rules of thumb,” so to speak—that do not always work, but often do, or that provide at least partial solutions. When beginning research for a term paper, for example, a useful heuristic is to scan the library catalogue for titles that look relevant. There is no guarantee that this strategy will yield the books most needed for the paper, but the strategy works enough of the time to make it worth trying.

In the nine-dot problem, most students began in Scene #1 with a simple algorithm that can be stated like this: “Draw one line, then draw another, and another, and another.” Unfortunately this simple procedure did not produce a solution, so they had to find other strategies for a solution. Three alternatives are described in Scenes #3 (for Alicia) and 4 (for Willem and Rachel). Of these, Willem’s response resembled a heuristic the most: he knew from experience that a good general strategy that often worked for such problems was to suspect a deception or trick in how the problem was originally stated. So he set out to question what the teacher had meant by the word line, and came up with an acceptable solution as a result.

The example also illustrates two common problems that sometimes happen during problem solving. One of these is functional fixedness: a tendency to regard the functions of objects and ideas as fixed (German & Barrett, 2005). Over time, we get so used to one particular purpose for an object that we overlook other uses. We may think of a dictionary, for example, as necessarily something to verify spellings and definitions, but it also can function as a gift, a doorstop, or a footstool. For students working on the nine-dot matrix described in the last section, the notion of “drawing” a line was also initially fixed; they assumed it to be connecting dots but not extending lines beyond the dots. Functional fixedness sometimes is also called response set, the tendency for a person to frame or think about each problem in a series in the same way as the previous problem, even when doing so is not appropriate to later problems. In the example of the nine-dot matrix described above, students often tried one solution after another, but each solution was constrained by a set response not to extend any line beyond the matrix.

Functional fixedness and the response set are obstacles in problem representation, the way that a person understands and organizes information provided in a problem. If information is misunderstood or used inappropriately, then mistakes are likely—if indeed the problem can be solved at all. With the nine-dot matrix problem, for example, construing the instruction to draw four lines as meaning “draw four lines entirely within the matrix” means that the problem simply could not be solved. For another, consider this problem: “The number of water lilies on a lake doubles each day. Each water lily covers exactly one square foot. If it takes 100 days for the lilies to cover the lake exactly, how many days does it take for the lilies to cover exactly half of the lake?” If you think that the size of the lilies affects the solution to this problem, you have not represented the problem correctly. Information about lily size is not relevant to the solution, and only serves to distract from the truly crucial information, the fact that the lilies double their coverage each day. (The answer, incidentally, is that the lake is half covered in 99 days; can you think why?)

Just as there are cognitive obstacles to problem solving, there are also general strategies that help the process be successful, regardless of the specific content of a problem (Thagard, 2005). One helpful strategy is problem analysis—identifying the parts of the problem and working on each part separately. Analysis is especially useful when a problem is ill-structured. Consider this problem, for example: “Devise a plan to improve bicycle transportation in the city.” Solving this problem is easier if you identify its parts or component subproblems, such as (1) installing bicycle lanes on busy streets, (2) educating cyclists and motorists to ride safely, (3) fixing potholes on streets used by cyclists, and (4) revising traffic laws that interfere with cycling. Each separate subproblem is more manageable than the original, general problem. The solution of each subproblem contributes the solution of the whole, though of course is not equivalent to a whole solution.

Another helpful strategy is working backward from a final solution to the originally stated problem. This approach is especially helpful when a problem is well-structured but also has elements that are distracting or misleading when approached in a forward, normal direction. The water lily problem described above is a good example: starting with the day when all the lake is covered (Day 100), ask what day would it therefore be half covered (by the terms of the problem, it would have to be the day before, or Day 99). Working backward in this case encourages reframing the extra information in the problem (i. e. the size of each water lily) as merely distracting, not as crucial to a solution.

A third helpful strategy is analogical thinking—using knowledge or experiences with similar features or structures to help solve the problem at hand (Bassok, 2003). In devising a plan to improve bicycling in the city, for example, an analogy of cars with bicycles is helpful in thinking of solutions: improving conditions for both vehicles requires many of the same measures (improving the roadways, educating drivers). Even solving simpler, more basic problems is helped by considering analogies. A first grade student can partially decode unfamiliar printed words by analogy to words he or she has learned already. If the child cannot yet read the word screen, for example, he can note that part of this word looks similar to words he may already know, such as seen or green, and from this observation derive a clue about how to read the word screen. Teachers can assist this process, as you might expect, by suggesting reasonable, helpful analogies for students to consider.