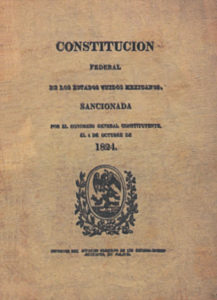 Constitutional government in Texas began with the Mexican federal Constitution of 1824, which, to some degree, was patterned after the United States Constitution but resembled more the Spanish Constitution of 1812. Congress was made the final interpreter of the document; the Catholic religion was made the state faith; and the church was supported by the public treasury. The president and vice president were elected for four-year terms by the legislative bodies of the states, the lower house of Congress to elect in case of a tie or lack of a majority. There were numerous limitations on the powers of the president. The Congress was composed of two houses meeting annually from January 1 to April 15. The president could prolong the regular session for an additional thirty days and could call extra sessions. Deputies in the lower house served two years, while senators were selected by their state legislatures for four-year terms. The judicial power was vested in a Supreme Court and superior courts of departments and districts. The Supreme Court was composed of eleven judges and the attorney general. There was no particular effort to define the rights of the states in the confederacy. They were required to separate executive, legislative, and judicial functions in their individual constitutions, which were to be in harmony with the national constitution, but local affairs were independent of the general government.