Tensions between the United States and Mexico rapidly deteriorated in the 1840s as American expansionists eagerly eyed Mexican land to the west, including the lush northern Mexican province of California. Indeed, in 1842, a U.S. naval fleet, incorrectly believing war had broken out, seized Monterey, California, a part of Mexico. Monterey was returned the next day, but the episode only added to the uneasiness with which Mexico viewed its northern neighbor. The forces of expansion, however, could not be contained, and American voters elected James Polk in 1844 because he promised to deliver more lands. President Polk fulfilled his promise by gaining Oregon and, most spectacularly, provoking a war with Mexico that ultimately fulfilled the wildest fantasies of expansionists. By 1848, the United States encompassed much of North America, a republic that stretched from the Atlantic to the Pacific.

JAMES K. POLK AND THE TRIUMPH OF EXPANSION

A fervent belief in expansion gripped the United States in the 1840s. In 1845, a New York newspaper editor, John O’Sullivan, introduced the concept of “manifest destiny” to describe the popular idea of the special role of the United States in overspreading the continent—the divine right and duty of white Americans to seize and settle the American West, thus spreading Protestant, democratic values. In this climate of opinion, voters in 1844 elected James K. Polk, a slaveholder from Tennessee, because he vowed to annex Texas as a new slave state and take Oregon.

Annexing Oregon was an important objective for U.S. foreign policy because it appeared to be an area rich in commercial possibilities. Northerners favored U.S. control of Oregon because ports in the Pacific Northwest would be gateways for trade with Asia. Southerners hoped that, in exchange for their support of expansion into the northwest, northerners would not oppose plans for expansion into the southwest. 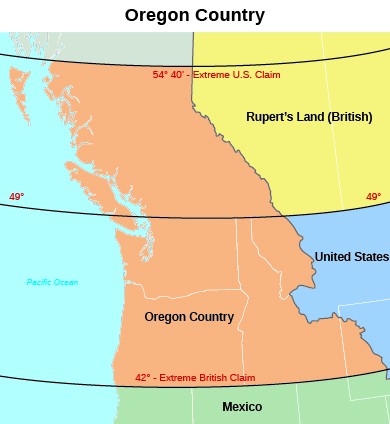 This map of the Oregon territory during the period of joint occupation by the United States and Great Britain shows the area whose ownership was contested by the two powers.

President Polk—whose campaign slogan in 1844 had been “Fifty-four forty or fight!”—asserted the United States’ right to gain full control of what was known as Oregon Country, from its southern border at 42° latitude (the current boundary with California) to its northern border at 54° 40′ latitude. According to an 1818 agreement, Great Britain and the United States held joint ownership of this territory, but the 1827 Treaty of Joint Occupation opened the land to settlement by both countries. Realizing that the British were not willing to cede all claims to the territory, Polk proposed the land be divided at 49° latitude (the current border between Washington and Canada). The British, however, denied U.S. claims to land north of the Columbia River (Oregon’s current northern border). Indeed, the British foreign secretary refused even to relay Polk’s proposal to London. However, reports of the difficulty Great Britain would face defending Oregon in the event of a U.S. attack, combined with concerns over affairs at home and elsewhere in its empire, quickly changed the minds of the British, and in June 1846, Queen Victoria’s government agreed to a division at the forty-ninth parallel.

In contrast to the diplomatic solution with Great Britain over Oregon, when it came to Mexico, Polk and the American people proved willing to use force to wrest more land for the United States. In keeping with voters’ expectations, President Polk set his sights on the Mexican state of California. After the mistaken capture of Monterey, negotiations about purchasing the port of San Francisco from Mexico broke off until September 1845. Then, following a revolt in California that left it divided in two, Polk attempted to purchase Upper California and New Mexico as well. These efforts went nowhere. The Mexican government, angered by U.S. actions, refused to recognize the independence of Texas.

Finally, after nearly a decade of public clamoring for the annexation of Texas, in December 1845 Polk officially agreed to the annexation of the former Mexican state, making the Lone Star Republic an additional slave state. Incensed that the United States had annexed Texas, however, the Mexican government refused to discuss the matter of selling land to the United States. Indeed, Mexico refused even to acknowledge Polk’s emissary, John Slidell, who had been sent to Mexico City to negotiate. Not to be deterred, Polk encouraged Thomas O. Larkin, the U.S. consul in Monterey, to assist any American settlers and any Californios, the Mexican residents of the state, who wished to proclaim their independence from Mexico. By the end of 1845, having broken diplomatic ties with the United States over Texas and having grown alarmed by American actions in California, the Mexican government warily anticipated the next move. It did not have long to wait. 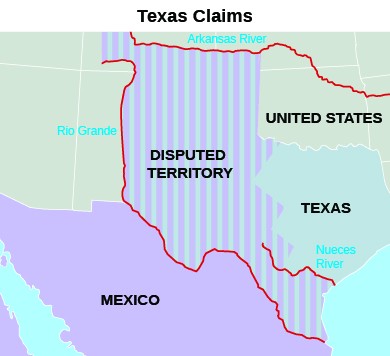 In January 1846, the U.S. force that was ordered to the banks of the Rio Grande to build a fort on the “American” side encountered a Mexican cavalry unit on patrol. Shots rang out, and sixteen U.S. soldiers were killed or wounded. Angrily declaring that Mexico “has invaded our territory and shed American blood upon American soil,” President Polk demanded the United States declare war on Mexico. On May 12, Congress obliged.

The small but vocal antislavery faction decried the decision to go to war, arguing that Polk had deliberately provoked hostilities so the United States could annex more slave territory. Illinois representative Abraham Lincoln and other members of Congress issued the “Spot Resolutions” in which they demanded to know the precise spot on U.S. soil where American blood had been spilled. Many Whigs also denounced the war. Democrats, however, supported Polk’s decision, and volunteers for the army came forward in droves from every part of the country except New England, the seat of abolitionist activity. Enthusiasm for the war was aided by the widely held belief that Mexico was a weak, impoverished country and that the Mexican people, perceived as ignorant, lazy, and controlled by a corrupt Roman Catholic clergy, would be easy to defeat. 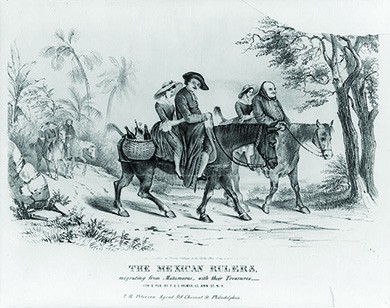 Anti-Catholic sentiment played an important role in the Mexican-American War. The American public widely regarded Roman Catholics as cowardly and vice-ridden, like the clergy in this ca. 1846 lithograph who are shown fleeing the Mexican town of Matamoros accompanied by pretty women and baskets full of alcohol. (credit: Library of Congress)

U.S. military strategy had three main objectives: 1) Take control of northern Mexico, including New Mexico; 2) seize California; and 3) capture Mexico City. General Zachary Taylor and his Army of the Center were assigned to accomplish the first goal, and with superior weapons they soon captured the Mexican city of Monterrey. Taylor quickly became a hero in the eyes of the American people, and Polk appointed him commander of all U.S. forces.

General Stephen Watts Kearny, commander of the Army of the West, accepted the surrender of Santa Fe, New Mexico, and moved on to take control of California, leaving Colonel Sterling Price in command. Despite Kearny’s assurances that New Mexicans need not fear for their lives or their property, and in fact the region’s residents rose in revolt in January 1847 in an effort to drive the Americans away. Although Price managed to put an end to the rebellion, tensions remained high.

Kearny, meanwhile, arrived in California to find it already in American hands through the joint efforts of California settlers, U.S. naval commander John D. Sloat, and John C. Fremont, a former army captain and son-in-law of Missouri senator Thomas Benton. Sloat, at anchor off the coast of Mazatlan, learned that war had begun and quickly set sail for California. He seized the town of Monterey in July 1846, less than a month after a group of American settlers led by William B. Ide had taken control of Sonoma and declared California a republic. A week after the fall of Monterey, the navy took San Francisco with no resistance. Although some Californios staged a short-lived rebellion in September 1846, many others submitted to the U.S. takeover. Thus Kearny had little to do other than take command of California as its governor.

Leading the Army of the South was General Winfield Scott. Both Taylor and Scott were potential competitors for the presidency, and believing—correctly—that whoever seized Mexico City would become a hero, Polk assigned Scott the campaign to avoid elevating the more popular Taylor, who was affectionately known as “Old Rough and Ready.”

Scott captured Veracruz in March 1847, and moving in a northwesterly direction from there (much as Spanish conquistador Hernán Cortés had done in 1519), he slowly closed in on the capital. Every step of the way was a hard-fought victory, however, and Mexican soldiers and civilians both fought bravely to save their land from the American invaders. Mexico City’s defenders, including young military cadets, fought to the end. According to legend, cadet Juan Escutia’s last act was to save the Mexican flag, and he leapt from the city’s walls with it wrapped around his body. On September 14, 1847, Scott entered Mexico City’s central plaza; the city had fallen. While Polk and other expansionists called for “all Mexico,” the Mexican government and the United States negotiated for peace in 1848, resulting in the Treaty of Guadalupe Hidalgo. 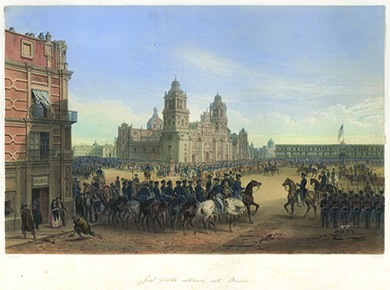 In General Scott’s Entrance into Mexico (1851), Carl Nebel depicts General Winfield Scott on a white horse entering Mexico City’s Plaza de la Constitución as anxious residents of the city watch. One woman peers furtively from behind the curtain of an upstairs window. On the left, a man bends down to pick up a paving stone to throw at the invaders.

The Treaty of Guadalupe Hidalgo, signed in February 1848, was a triumph for American expansionism under which Mexico ceded nearly half its land to the United States. The Mexican Cession, as the conquest of land west of the Rio Grande was called, included the current states of California, New Mexico, Arizona, Nevada, Utah, and portions of Colorado and Wyoming. Mexico also recognized the Rio Grande as the border with the United States. Mexican citizens in the ceded territory were promised U.S. citizenship in the future when the territories they were living in became states. In exchange, the United States agreed to assume $3.35 million worth of Mexican debts owed to U.S. citizens, paid Mexico $15 million for the loss of its land, and promised to guard the residents of the Mexican Cession from Indian raids.

As extensive as the Mexican Cession was, some argued the United States should not be satisfied until it had taken all of Mexico. Many who were opposed to this idea were southerners who, while desiring the annexation of more slave territory, did not want to make Mexico’s large mestizo (people of mixed Indian and European ancestry) population part of the United States. Others did not want to absorb a large group of Roman Catholics. These expansionists could not accept the idea of new U.S. territory filled with mixed-race, Catholic populations.