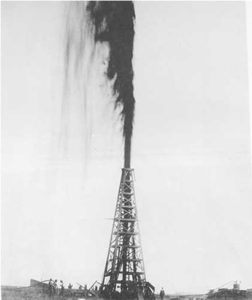 The Texas oil boom, sometimes called the gusher age, was a period of dramatic change and
economic growth in the U.S. state of Texas during the early 20th century that began with the discovery of a large petroleum reserve near Beaumont, Texas. The find was unprecedented in its size and ushered in an age of rapid regional development and industrialization that has few parallels in U.S. history. Texas quickly became one of the leading oil-producing states in the U.S., along with Oklahoma and California; soon the nation overtook the Russian Empire as the top producer of petroleum. By 1940 Texas had come to dominate U.S. production. Some historians even define the beginning of the world’s Oil Age as the beginning of this era in Texas.[1]

The major petroleum strikes that began the rapid growth in petroleum exploration and speculation occurred in Southeast Texas, but soon reserves were found across Texas and wells were constructed in North Texas, East Texas, and the Permian Basin in West Texas. Although limited reserves of oil had been struck during the 19th century, the strike at Spindletop near Beaumont in 1901 gained national attention, spurring exploration and development that continued through the 1920s and beyond. Spindletop and the Joiner strike in East Texas, at the outset of the Great Depression, were the key strikes that launched this era of change in the state.

This period had a transformative effect on Texas. At the turn of the century, the state was predominantly rural with no large cities.[2] By the end of World War II, the state was heavily industrialized, and the populations of Texas cities had broken into the top 20 nationally.[3] The city of Houston was among the greatest beneficiaries of the boom, and the Houston area became home to the largest concentration of refineries and petrochemical plants in the world.[4] The city grew from a small commercial center in 1900 to one of the largest cities in the United States during the decades following the era. This period, however, changed all of Texas’ commercial centers (and developed the Beaumont/Port Arthur area, where the boom began).

H. Roy Cullen, H. L. Hunt, Sid W. Richardson, and Clint Murchison were the four most influential businessmen during this era. These men became among the wealthiest and most politically powerful in the state and the nation.