At the end of this section, you’ll be able to

Redistricting is the process by which new congressional and state legislative district boundaries are drawn. Each of Texas’ 36 United States Representatives and 181 state legislators are elected from political divisions called districts. United States Senators are not elected by districts, but by the states at large. District lines are redrawn every 10 years following completion of the United States census. The federal government stipulates that districts must have nearly equal populations and must not discriminate on the basis of race or ethnicity.

Why does Texas have to redistrict?

The federal constitution calls for reapportionment of congressional seats according to population from a decennial census (Section 2, Article I). Reapportionment is the division of a set number of districts among established units of government. For example, the 435 congressional seats are reapportioned among the 50 states after each decennial census according to the method of equal proportions. The boundaries of the congressional districts are then redrawn by state legislatures in accordance with state and federal law.

Redistricting is the revision or replacement of existing districts, resulting in new districts with different geographical boundaries. The basic purpose of decennial redistricting is to equalize population among electoral districts after publication of the United States census indicates an increase or decrease in or shift of population.

The Texas Constitution requires the legislature to redistrict Texas house and senate seats during its first regular session following publication of each United States decennial census (Section 28, Article III). After each census, State Board of Education seats also must be redistricted to bring them into compliance with the one-person, one-vote requirement.

Although the formal redistricting process under the Texas Constitution may remain the same, every decade sees a different, often unpredictable, path for state redistricting plans, depending on legislative, gubernatorial, Legislative Redistricting Board, and judicial action. The history of the redistricting process during the 1980s, 1990s, 2000s, and 2010s illustrates some of the different courses decennial redistricting can take. The timing and legal requirements, however, dictate that the basic process generally takes the following course, which is described in more detail in the associated sections.

Federal census population data is delivered to the legislature no later than April 1 of the year following the decennial census, and the data is usually provided several weeks earlier. As soon as the census data is verified and loaded in the computer systems, the members of the legislature and other interested parties begin drawing plans. Bills to enact new state redistricting plans follow the same path through the legislature as other legislation.

If Texas senate or house districts are not enacted during the first regular session following the publication of the decennial census, the Texas Constitution requires that the Legislative Redistricting Board (LRB), a five-member body of state officials including the lieutenant governor and speaker, meet and adopt its own plan. The LRB has jurisdiction only in the months immediately following that regular session.

If congressional or State Board of Education districts are not enacted during the regular session, the governor may call a special session to consider the matter. If the governor does not call a special session, then a state or federal district court likely will issue court-ordered plans. Similarly, if the legislature and LRB fail to adopt a state senate or state house plan, a court will likely issue a plan to fill the void.

A suit challenging an adopted redistricting plan may be brought at any time under the federal or state constitution or federal law. Before 2013, Texas and certain other states were required to obtain federal preclearance of any redistricting plans before they could be implemented. In 2013, the applicable provision of the federal Voting Rights Act was held invalid by the U.S. Supreme Court.

The filing deadline for primary elections established by the Texas Election Code allows approximately six and one half months from the end of the regular legislative session for the governor to act on any redistricting legislation passed, for the LRB to meet if necessary, for any special session called to consider redistricting if necessary, for court action, and for counties to make necessary changes in county election precincts.

There are conflicting opinions regarding the correlation between partisan gerrymandering and electoral competitiveness. In 2012, Jennifer Clark, a political science professor at the University of Houston, said, “The redistricting process has important consequences for voters. In some states, incumbent legislators work together to protect their own seats, which produces less competition in the political system. Voters may feel as though they do not have a meaningful alternative to the incumbent legislator. Legislators who lack competition in their districts have less incentive to adhere to their constituents’ opinions.”

Section 2 of the Voting Rights Act of 1965 mandates that electoral district lines cannot be drawn in such a manner as to “improperly dilute minorities’ voting power.”

No voting qualification or prerequisite to voting, or standard, practice, or procedure shall be imposed or applied by any State or political subdivision to deny or abridge the right of any citizen of the United States to vote on account of race or color.

Critics, meanwhile, contend that the establishment of majority-minority districts can result in packing, which occurs when a constituency or voting group is placed within a single district, thereby minimizing its influence in other districts. Because minority groups tend to vote Democratic, critics argue that majority-minority districts ultimately present an unfair advantage to Republicans by consolidating Democratic votes into a smaller number of districts.

You may view current district maps at the Texas Legislative Council’s section on Texas Redisticting where you can use the DistrictViewer software. 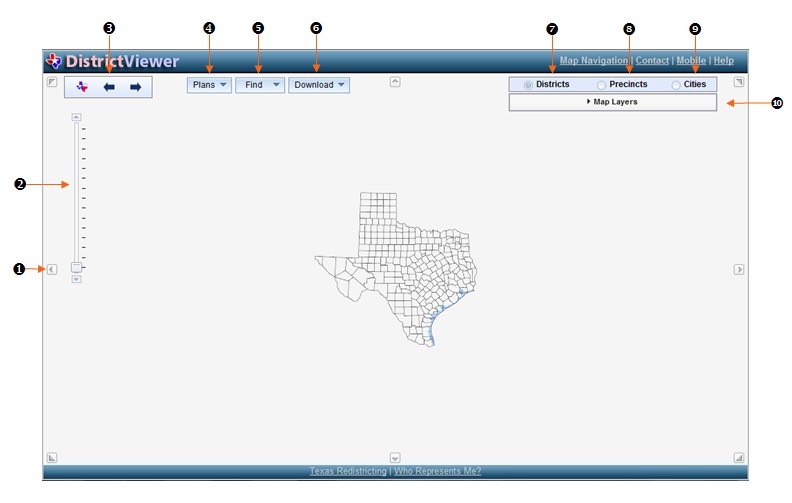