There are four basic methods (sometimes called styles) of presenting a speech: manuscript, memorized, extemporaneous, and impromptu. Each has a variety of uses in various forums of communication. 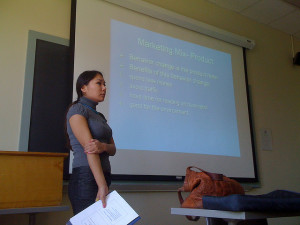 The word manuscript is the clue to the style. The speech is written and the speaker reads it word for word to the audience. Originally, it was done from the hand-written paper manuscript. Today the manuscript style is common, but the paper is gone. Who reads the speech to the audience? Answer: Newscasters and television personalities. In the old days, the manuscript was hand-lettered on cue cards, which were held next to the camera lens. Then paper scrolls, like printed piano rolls were used, especially in Soap Operas. Today, a special teleprompter (working like a periscope) is attached to the camera so the newscaster is looking at the lens while reading.

Why is the manuscript important and in use? Precision. In the news- reporting industry, every fraction of a second counts because broadcast time is costly. Also, the facts and names must be exact and accurate so there is no room for error. Errors in reporting decrease the credibility of the news organization and the newscaster.

The most regular use of the teleprompter for manuscript delivery is by the U.S. President. In fact, the teleprompter, used by every President since Reagan, is called a “Presidential Teleprompter.” It is made of two pieces of glass, each flanking the podium. They reflect the text from a monitor on the floor like a periscope. The glass on both sides has the same text, and the speaker looks alternately from one glass to the other as though looking at the audience through the glass. The audience cannot see the projected text. The speeches a President gives will often reflect national policy, define international relationships, and the press will scrutinize every syllable. It has to be more than brilliantly accurate; it has to be impeccably phased. Professional writers and policy experts compose the speech; and the President delivers it as though he not only wrote it, but made it up on the spot. That is the skill of a good politician, actor, or speaker. Those who are not skilled using a teleprompter or manuscript will sound stilted and boring.

Watch the local or national 6 p.m., 11 p.m. and 6 a.m. newscasts on the same T.V. station. Make notes on which news items repeat and how closely, or exactly, the phrasing is, even if different personalities are presenting the same item.

The memorized style of speaking is when the manuscript is committed to memory and recited to the audience verbatim (word for word). In the days when elocution was taught, this was a typical approach. A speech was a recitation. The Optimists Club (a national organization) used to have a “Oratory” contest for high school students. Contestants wrote essays on a given theme, to create a speech at a specific time length (e.g.: three minutes). The essay was memorized and the delivery was judged by 1) the quality of the writing, 2) the accuracy with which it was recited; and 3) the precise length of time. Such contests seem archaic by today’s more casual and somewhat less formal standards.

Where is a memorized delivery style still common? Due to copyright laws and licensing contract agreements (other than scripts that are in the public domain), actors on stage are obligated to memorize the script of the play and perform it verbatim exactly as written. It is typical for speakers on high school and university speech and debate teams to memorize their competitive speeches. Corporate conventions often use large LCD monitors on the front of the stage as teleprompters. This allows the speaker to move more freely across the stage while sticking to his or her script. Some monologists (such as the stand-up comics mentioned at the start of the chapter) also use a memorized delivery style. In all cases, they create the impression that the speech is spontaneous. You might consider using the memorized delivery style if your speech is relatively short, or you know you will have to deliver your speech repeatedly such as a tour operator would.

Theoretically, an “impromptu” speech is “made up on the spot.” It is unprepared and unrehearsed. Often ceremonial toasts, grace before meals, an acknowledgement, an introduction, offering thanks and so on, fall into this category. While there are some occasions when a speech in those categories is actually prepared (prepare your acceptance for the Academy Award BEFORE you are called!), there are many occasions when there is little or no opportunity to prepare.

Impromptu speeches are generally short and are often given with little or no notice. Notes are rare and the speaker generally looks directly at the audience. It would be presumptuous and arrogant to declare rules for Impromptu Speaking. It is fair to explain that “impromptu” describes a range from absolutely no preparation, to a modest amount of preparation (mostly thought) and rarely incorporates research or the formalities of outlines and citations that more formal speeches would include.

Be still when you have nothing to say; when genuine passion moves you, say what you’ve got to say, and say it hot. – D. H. Lawrence

An indelibly memorable example occurred to me when my siblings threw a surprise 10th anniversary party for my Mom (Margaret) and our stepdad (Lidio). It was the third marriage for both of them, and they were in their 60’s. As soon as the yells of “surprise” subsided, Lidio picked up his wine glass and proposed a toast:

“I can’t believe this surprise! I don’t know what to say… um, Dino [his brother] when was that Yankee game Dad took us to when we were kids? It was 4th of July, wasn’t it? 1939? And it was like it was yesterday; and today reminds me of that day, when Lou Gehrig came out to the mound. He was slow, but we were all cheering the ‘Pride of the Yankees.’ He wasn’t playing anymore, he was too sick, but he looked around the crowd, and said ‘I’m the luckiest man alive.’ That’s how I feel with you all here today; to celebrate our 10th anniversary. I’m here with you and with Margaret; and I’m the luckiest man alive.”

The speech was short, emotionally charged, wonderfully articulate, and absolutely unprepared. The speech had one central emotionally charged message; simple, in words and phrasing, but complex by bringing an image of great sentimentality to the occasion. He was able to react to the moment, and speak “from the heart.”

In contrast, legendary magician Harry Houdini was often asked to perform for the amusement of his fellow passengers when sailing to Europe. I always associate “impromptu” with the stories of Houdini’s shipboard conjuring. Nothing was further from “impromptu.” The skill of the great magician was in making his illusions seem spontaneous with what appeared to be ordinary items that “happened” to be on hand. Houdini spent endless hours planning and rehearsing. The true illusion was that they “appeared” to be impromptu.

Take advantage of every opportunity to practice your communication skills so that when important occasions arise, you will have the gift, the style, the sharpness, the clarity, and the emotions to affect other people. – Jim Rohn

Sandwiched between the memorized and impromptu delivery styles you find the extemporaneous speech style. For this style, the speech is not completely written out. It is usually delivered with keynotes for reference. Most public speaking courses and books describe extemporaneous speeches as carefully prepared and rehearsed, but delivered using notes of key words and phrases to support the speaker. Phrasing is pre- rehearsed, words are pre-chosen, and the organization is fluid and well constructed. There should be no fumbling for words, no rambling, and length of time should be carefully monitored. The style does offer the speaker flexibility to include references to the immediate surroundings, previous speeches, news of the day, and so on.

The trouble with talking too fast is you may say something you haven’t thought of yet.” – Ann Landers 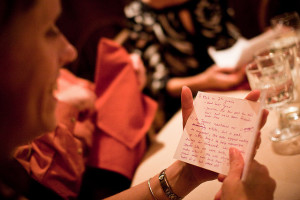 How you develops the notes and what they look like are up to the individual, but a natural extemporaneous delivery is difficult if you are relying on a manuscript. Under no circumstances should the speaker be spending more than 20% of the speaking time looking at the notes. It would be ideal to practice so you only glance at your notes approximately 5% of the time of the speech.

Those who have limited experience in formal speaking find it helpful to write out the speech as though it were an essay, then read it, edit it, then create speaking notes from the text. This helps with editing and with thinking through the phrases. This process of public speaking was taught decades ago to my contemporaries and me and has fallen out of fashion. But it is a useful way of thoroughly thinking through the speech. If this procedure is used, it is advisable to rehearse the speech with the notes without the essay prior to delivering the speech. But be warned: having the fully written essay at the podium might detract from the delivery.

The extemporaneous style is the method most often recommended (and often required) in today’s public speaking courses, and is generally the best method in other settings as well. While it is not the only method of delivering a speech, it is the most useful for presentations in other courses, in the corporate world and in pursuing future careers.