After reading this chapter, you should be able to:

Your purpose is to make your audience see what you saw, hear what you heard, feel what you felt. Relevant detail, couched in concrete, colorful language, is the best way to recreate the incident as it happened and to picture it for the audience. – Dale Carnegie

The Power of Language 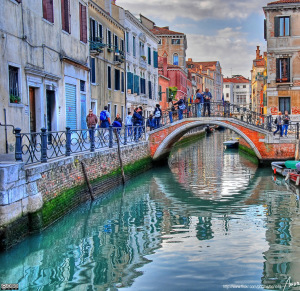 Imagine for a moment that you were asked to list everything that you know about the country of Italy in spite of the fact that you have never actually visited the country. What would you write? You would have to think about all that you were told about Italy throughout your life, and you would probably list first the bits of information that have been repeated to you by various people and in a variety of contexts. So, for example, you might recall that in geography class you learned particular things about Italy. You might also recall the various movies you’ve seen that were either supposedly set in Italy or dealt with some element of what has been deemed by the film as “Italian culture.” Those movies could include The Godfather, The Italian Job, or The DaVinci Code. You might think about stories your Italian grandmother told you about her childhood spent in Rome or remember images you have seen in history books about World War II. In other words, throughout your life you have learned a lot of different things that you now assume to be true about this country called “Italy” and you’ve learned all of these things about Italy through language, whether it be through verbal storytelling or through your interpretation of images in a book or on a screen. Now, consider for a moment the possibility that everything you’ve heard about Italy has been incorrect. Since you have not ever actually been to the country and had first-hand experience with its geography and culture, for example, how would you know if what you’ve been told is true or not?

Language is one of the most influential and powerful aspects of our daily lives and yet very few people pay attention to it in their interpersonal and public communication. The power of language cannot be overemphasized— language constructs, reflects, and maintains our social realities, or what we believe to be “true” with regard to the world around us. The point of the example above is that what we “know is true” about a person, place, thing, idea, or any other aspect of our daily lives very much depends on what experiences we have had (or not), what information we have (or have not) come across, and what words people have used (or not used) when communicating about our world.

Language can also have an impact on how we feel about this reality. How we define words and how we feel about those words is highly subjective. In fact, cognitive psychologist Lera Boroditsky showed a key to a group of Spanish-speakers and to a group of German-speakers. The researchers then asked the participants to describe the key they had been shown. Because the Spanish word for “key” is gendered as feminine, Spanish speakers defined the key using words such as lovely, tiny, and magic. The German word for “key” is gendered masculine, however, and German speakers defined the key using adjectives like hard, jagged, and awkward.[1] This study suggests that the words we use to define something can have an impact on how we perceive what those words represent. 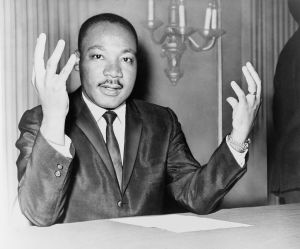 Because language is such a powerful, yet unexamined, part of our lives, this chapter focuses on how language functions and how competent speakers harness the power of language. Consider the case of the Reverend Dr. Martin Luther King, Jr. Indeed, many speakers before him made the very same persuasive arguments regarding the lack of civil rights for Black Americans, yet we regularly point to the Reverend Dr. King as a preeminent speaker for the civil rights movement because he was a master of language— he employed the power of language to move his audiences in ways they had not been moved before, and we remember him for his eloquence.

To understand the power of language, we need to differentiate between communication and language. Communication occurs when we try to transfer what is in our minds to the minds of our audience. Whether speaking to inform, persuade, or entertain, the main goal of a speaker is to effectively communicate her or his thoughts to audience members. Most chapters in this text help you determine how best to communicate information through considerations such as organizational structure, audience analysis, delivery, and the like. Language, on the other hand, is the means by which we communicate—a system of symbols we use to form messages. We learn language as a child in order to read, write, and speak. Once we have mastered enough language we can communicate with relative ease, yet growing up we rarely learn much about language choices and what they mean for our communication. We regularly hear people say, “If we just communicated more or for longer periods of time we’d better understand each other.” What these types of statements reflect is our lack of understanding of the differences between communication and language. Therefore, many of us believe that when problems arise we should strive to have more communication between the parties. But what we need is better communication by focusing on language choice.

Our social realities are constructed through language; and therefore, people with different experiences in, and understandings of, the world can define the same things in very different ways. Language is culturally transmitted—we learn how to define our world first from our families and then our later definitions of the world are influenced by friends and institutions such as the media, education, and religion. If we grow up in a sexist culture, we are likely to hold sexist attitudes.
Similarly, if we grow up in a culture that defines the environment as our first priority in making any decisions, we’re likely to grow with environmentally friendly attitudes. Language, then, is not neutral. As a culture, as groups of people, and as individuals, we decide what words we’re going to use to define one thing or another.

Culture is the collective programming of the mind that distinguishes the members of one category of people from another. – Geert Hofstede

For public speakers, these facts are important for three primary reasons. First, the careful use of language can make the difference between you giving a remarkable speech and one that is utterly forgettable. Second, you must remember that audience members may not share the same language for the definition of the very same ideas, realities, or even specific items. Finally, the language that you use in public (and even private) communication says something about you—about how you define and therefore perceive the world. If you are not careful with your language you may unintentionally communicate something negative about yourself simply because of a careless use of language. You should think very carefully about your audience’s and your own language when you prepare to speak publicly. You can master all of the other elements in this textbook, but without an effective use of language those other mastered skills will not mean much to your audience. The suggestions in this chapter will help you communicate as effectively as possible using appropriate and expressive. You’ll also learn about language to avoid so that your language leaves the audience with a positive impression of you.

The Differences Language Choices can Make

This paragraph is clear and simple. It gets the point across to the audience. But compare my version of his paragraph to Reverend Jackson’s actual words:

The significant difference between these two versions of the paragraph can be explained simply as the difference between carefully choosing one group of words over another group of words. My version of the speech is fine, but it is utterly forgettable. Reverend Jackson’s exact wording, however, is stunning. The audience probably remembered his speech and the chills that went down their spines when they heard it long after it was over. This example, I hope, exemplifies the difference language choice can make. Using language in a way that makes you and your speech memorable, however, takes work. Few people come by this talent naturally, so give yourself plenty of time to rework your first draft to fine tune and perfect your language choice. Using some of the strategies discussed below will help you in this process.