Bereavement refers to outward expressions of grief. Mourning and funeral rites are expressions of loss that reflect personal and cultural beliefs about the meaning of death and the afterlife. When asked what type of funeral they would like to have, students responded in a variety of ways; each expressing both their personal beliefs and values and those of their culture.

I would like the service to be at a Baptist church, preferably my Uncle Ike’s small church. The service should be a celebration of life . . .I would like there to be hymns sung by my family members, including my favorite one, “It is Well With my Soul”. . .At the end, I would like the message of salvation to be given to the attendees and an alter call for anyone who would like to give their life to Christ. . .

I want a very inexpensive funeral-the bare minimum, only one vase of flowers, no viewing of the remains and no long period of mourning from my remaining family . . . funeral expenses are extremely overpriced and out of hand. . .

When I die, I would want my family members, friends, and other relatives to dress my body as it is usually done in my country, Ghana. Lay my dressed body in an open space in my house at the night prior to the funeral ceremony for my loved ones to walk around my body and mourn for me. . .

I would like to be buried right away after I die because I don’t want my family and friends to see my dead body and to be scared.

In my family we have always had the traditional ceremony-coffin, grave, tombstone, etc. But I have considered cremation and still ponder which method is more favorable. Unlike cremation, when you are ‘buried’ somewhere and family members have to make a special trip to visit, cremation is a little more personal because you can still be in the home with your loved ones . . .

I would like to have some of my favorite songs played . . .I will have a list made ahead of time. I want a peaceful and joyful ceremony and I want my family and close friends to gather to support one another. At the end of the celebration, I want everyone to go to the Thirsty Whale for a beer and Spang’s for pizza!

When I die, I want to be cremated . . . I want it the way we do it in our culture. I want to have a three day funeral and on the 4th day, it would be my burial/cremation day . . .I want everyone to wear white instead of black, which means they already let go of me. I also want to have a mass on my cremation day.

When I die, I would like to have a befitting burial ceremony as it is done in my Igbo customs. I chose this kind of funeral ceremony because that is what every average person wishes to have.

I want to be cremated . . . I want all attendees wearing their favorite color and I would like the song “Riders on the Storm” to be played . . .I truly hope all the attendees will appreciate the bass. At the end of this simple, short service, attendees will be given multi-colored helium filled balloons . . . released to signify my release from this earth. . .They will be invited back to the house for ice cream cones, cheese popcorn and a wide variety of other treats and much, much, much rock music . . .

I want to be cremated when I die. To me, it’s not just my culture to do so but it’s more peaceful to put my remains or ashes to the world. Let it free and not stuck in a casket. 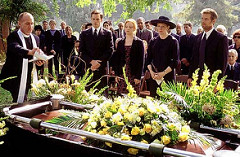 Ceremonies provide survivors a sense of closure after a loss. These rites and ceremonies send the message that the death is real and allow friends and loved ones to express their love and duty to those who die. Under circumstances in which a person has been lost and presumed dead or when family members were unable to attend a funeral, there can continue to be a lack of closure that makes it difficult to grieve and to learn to live with loss. And although many people are still in shock when they attend funerals, the ceremony still provides a marker of the beginning of a new period of one’s life as a survivor.

Grief is the psychological, physical, and emotional experience of loss. The five stages of loss are experienced by those who are in grief (Kubler-Ross & Kessler, 2005). Grief reactions vary depending on whether a loss was anticipated or unexpected, (parents do not expect to lose their children, for example), and whether or not it occurred suddenly or after a long illness, and whether or not the survivor feels responsible for the death.    Struggling with the question of responsibility is particularly felt by those who lose a loved one to suicide. There are numerous survivors for every suicide resulting in 4.5 million survivors of suicide in the United States (American Association of Suicidology, 2007). These survivors may torment themselves with endless “what ifs” in order to make sense of the loss and reduce feelings of guilt. And family members may also hold one another responsible for the loss. The same may be true for any sudden or unexpected death making conflict an added dimension to grief. Much of this laying of responsibility is an effort to think that we have some control over these losses; the assumption being that if we do not repeat the same mistakes, we can control what happens in our life.

Anticipatory grief occurs when a death is expected and survivors have time to prepare to some extent before the loss. Anticipatory grief can include the same denial, anger, bargaining, depression, and acceptance experienced in loss. This can make adjustment after a loss somewhat easier, although the stages of loss will be experienced again after the death (Kubler-Ross & Kessler, 2005). A death after a long-term, painful illness may bring family members a sense of relief that the suffering is over. The exhausting process of caring for someone who is ill is over.  Disenfranchised grief may be experienced by those who have to hide the circumstances of their loss or whose grief goes unrecognized by others.  Loss of an ex-spouse, lover, or pet may be examples of disenfranchised grief.

Yet grief continues as long as there is a loss. It has been said that intense grief lasts about two years or less, but grief is felt throughout life. One loss triggers the feelings that surround another. People grieve with varied intensity throughout the remainder of their lives. It does not end. But it eventually becomes something that a person has learned to live with. As long as we experience loss, we experience grief (Kubler-Ross & Kessler, 2005).

There are layers of grief. Initial denial, marked by shock and disbelief in the weeks following a loss may become an expectation that the loved one will walk in the door. And anger directed toward those who could not save our loved one’s life, may become anger that life did not turn out as we expected.  There is no right way to grieve.  A bereavement counselor expressed it well by saying that grief touches us on the shoulder from time to time throughout life.

Grief and mixed emotions go hand in hand. A sense of relief is accompanied by regrets and periods of reminiscing about our loved ones are interspersed with feeling haunted by them in death. Our outward expressions of loss are also sometimes contradictory. We want to move on but at the same time are saddened by going through a loved one’s possessions and giving them away. We may no longer feel sexual arousal or we may want sex to feel connected and alive. We need others to befriend us but may get angry at their attempts to console us. These contradictions are normal and we need to allow ourselves and others to grieve in their own time and in their own ways.

The “death-denying, grief-dismissing world” is the modern world (Kubler-Ross & Kessler, 2005, p. 205). We are asked to grieve privately, quickly, and to medicate our suffering. Employers grant us 3 to 5 days for bereavement, if our loss is that of an immediate family member. And such leaves are sometimes limited to no more than one per year. Yet grief takes much longer and the bereaved are seldom ready to perform well on the job. Obviously life does have to continue. But Kubler-Ross and Kessler suggest that contemporary American society would do well to acknowledge and make more caring accommodations to those who are in grief. Listen to this story about Kubler-Ross and her life and work in the link below.

Death and grief are topics that are being given greater consideration. This trend should continue as the population “grays” and our awareness of natural disaster and war, both in the United States and throughout the world grows. Viewing death as an integral part of the lifespan will benefit those who are ill, those who are bereaved, and all of us as friends, caregivers, partners, family members and humans in a global society.