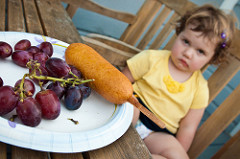 Children between the ages of 2 and 6 years tend to grow about 3 inches in height each year and gain about 4 to 5 pounds in weight each year. The average 6 year old weighs about 46 pounds and is about 46 inches in height. The 3 year old is very similar to a toddler with a large head, large stomach, short arms and legs. But by the time the child reaches age 6, the torso has lengthened and body proportions have become more like those of adults.

This growth rate is slower than that of infancy and is accompanied by a reduced appetite between the ages of 2 and 6. This change can sometimes be surprising to parents and lead to the development of poor eating habits.

Caregivers who have established a feeding routine with their child can find this reduction in appetite a bit frustrating and become concerned that the child is going to starve. However, by providing adequate, sound nutrition, and limiting sugary snacks and drinks, the caregiver can be assured that 1) the child will not starve; and 2) the child will receive adequate nutrition. Preschoolers can experience iron deficiencies if not given well-balanced nutrition and if given too much milk. Calcium interferes with the absorption of iron in the diet as well.

Caregivers need to keep in mind that they are setting up taste preferences at this age. Young children who grow accustomed to high fat, very sweet and salty flavors may have trouble eating foods that have more subtle flavors such as fruits and vegetables. Consider the following advice about establishing eating patterns for years to come (Rice, F.P., 1997). Notice that keeping mealtime pleasant, providing sound nutrition and not engaging in power struggles over food are the main goals:

1. Don’t try to force your child to eat or fight over food. Of course, it is impossible to force someone to eat. But the real advice here is to avoid turning food into some kind of ammunition during a fight. Do not teach your child to eat to or refuse to eat in order to gain favor or express anger toward someone else.

2. Recognize that appetite varies. Children may eat well at one meal and have no appetite at another. Rather than seeing this as a problem, it may help to realize that appetites do vary. Continue to provide good nutrition, but do not worry excessively if the child does not eat.

3. Keep it pleasant. This tip is designed to help caregivers create a positive atmosphere during mealtime. Mealtimes should not be the time for arguments or expressing tensions. You do not want the child to have painful memories of mealtimes together or have nervous stomachs and problems eating and digesting food due to stress.

4. No short order chefs. While it is fine to prepare foods that children enjoy, preparing a different meal for each child or family member sets up an unrealistic expectation from others. Children probably do best when they are hungry and a meal is ready. Limiting snacks rather than allowing children to “graze” continuously can help create an appetite for whatever is being served.

5. Limit choices. If you give your preschool aged child choices, make sure that you give them one or two specific choices rather than asking “What would you like for lunch?” If given an open choice, children may change their minds or choose whatever their sibling does not choose!

6. Serve balanced meals. This tip encourages caregivers to serve balanced meals. A box of macaroni and cheese is not a balanced meal. Meals prepared at home tend to have better nutritional value than fast food or frozen dinners. Prepared foods tend to be higher in fat and sugar content as these ingredients enhance taste and profit margin because fresh food is often more costly and less profitable. However, preparing fresh food at home is not costly. It does, however, require more activity. Preparing meals and including the children in kitchen chores can provide a fun and memorable experience.

7. Don’t bribe. Bribing a child to eat vegetable by promising desert is not a good idea. For one reason, the child will likely find a way to get the desert without eating the vegetables (by whining or fidgeting, perhaps, until the caregiver gives in), and for another reason, because it teaches the child that some foods are better than others. Children tend to naturally enjoy a variety of foods until they are taught that some are considered less desirable than others. A child, for example, may learn the broccoli they have enjoyed is seen as yucky by others unless it’s smothered in cheese sauce!

To what extent do these tips address cultural practices? How might these tips vary by culture?

Brain weight: If you recall, the brain is about 75 percent its adult weight by two years of age. By age 6, it is at 95 percent its adult weight. Myelination and the development of dendrites continues to occur in the cortex and as it does, we see a corresponding change in what the child is capable of doing. Greater development in the prefrontal cortex, the area of the brain behind the forehead that helps us to think, strategizes, and controls emotion, makes it increasingly possible to control emotional outbursts and to understand how to play games. Consider 4 or 5 year old children and how they might approach a game of soccer. Chances are every move would be a response to the commands of a coach standing nearby calling out, “Run this way! Now, stop. Look at the ball. Kick the ball!” And when the child is not being told what to do, he or she is likely to be looking at the clover on the ground or a dog on the other side of the fence! Understanding the game, thinking ahead, and coordinating movement improve with practice and myelination. Not being too upset over a loss, hopefully, does as well.

Have you ever examined the drawings of young children? If you look closely, you can almost see the development of visual pathways reflected in the way these images change as pathways become more mature. Early scribbles and dots illustrate the use of simple motor skills. No real connection is made between an image being visualized and what is created on paper.

At age 3, the child begins to draw wispy creatures with heads and not much other detail. Gradually pictures begin to have more detail and incorporate more parts of the body. Arm buds become arms and faces take on noses, lips and eventually eyelashes. Look for drawings that you or your child has created to see this fascinating trend. Here are some examples of pictures drawn by my daughters from ages 2 to 7 years. 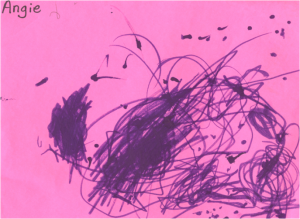 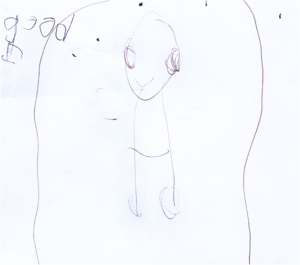 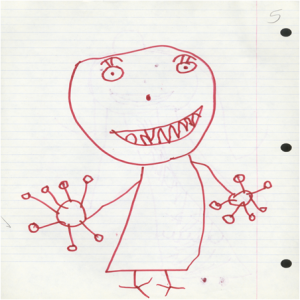 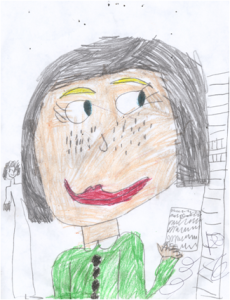 Growth in the hemispheres and corpus callosum: Between ages 3 and 6, the left hemisphere of the brain grows dramatically. This side of the brain or hemisphere is typically involved in language skills. The right hemisphere continues to grow throughout early childhood and is involved in tasks that require spatial skills such as recognizing shapes and patterns. The corpus callosum which connects the two hemispheres of the brain undergoes a growth spurt between ages 3 and 6 as well and results in improved coordination between right and left hemisphere tasks. (I once saw a 5 year old hopping on one foot, rubbing his stomach and patting his head all at the same time. I asked him what he was doing and he replied, “My teacher said this would help my corpus callosum!” Apparently, his kindergarten teacher had explained the process!)

Early childhood is a time when children are especially attracted to motion and song. Days are filled with moving, jumping, running, swinging and clapping and every place becomes a playground. Even the booth at a restaurant affords the opportunity to slide around in the seat or disappear underneath and imagine being a sea creature in a cave! Of course, this can be frustrating to a caregiver, but it’s the business of early childhood. Children continue to improve their gross motor skills as they run and jump. And frequently ask their caregivers to “look at me” while they hop or roll down a hill. Children’s songs are often accompanied by arm and leg movements or cues to turn around or move from left to right. Fine motor skills are also being refined in activities such as pouring water into a container, drawing, coloring, and using scissors. Some children’s songs promote fine motor skills as well (have you ever heard of the song “itsy, bitsy, spider”?). Mastering the fine art of cutting one’s own fingernails or tying shoes will take a lot of practice and maturation. Motor skills continue to develop in middle childhood-but for preschoolers, play that deliberately involves these skills is emphasized.

Go ahead. Sing along and practice your fine motor skills.

Historically, children have been thought of as innocent or incapable of sexual arousal (Aries, 1962). Yet, the physical dimension of sexual arousal is present from birth. But to associate the elements of seduction, power, love, or lust that is part of the adult meanings of sexuality would be inappropriate. Sexuality begins in childhood as a response to physical states and sensation and cannot be interpreted as similar to that of adults in any way (Carroll, 2007).

Infancy: Boys and girls are capable of erections and vaginal lubrication even before birth (Martinson, 1981). Arousal can signal overall physical contentment and stimulation that accompanies feeding or warmth. And infants begin to explore their bodies and touch their genitals as soon as they have the sufficient motor skills. This stimulation is for comfort or to relieve tension rather than to reach orgasm (Carroll, 2007).

Early Childhood: Self-stimulation is common in early childhood for both boys and girls. Curiosity about the body and about others’ bodies is a natural part of early childhood as well. Consider this example. A mother is asked by her young daughter: “So it’s okay to see a boy’s privates as long as it’s the boy’s mother or a doctor?” The mother hesitates a bit and then responds, “Yes. I think that’s alright.” “Hmmm,” the girl begins, “When I grow up, I want to be a doctor!” Hopefully, this subject is approached in a way that teaches children to be safe and know what is appropriate without frightening them or causing shame.

Hopefully, parents respond to this without undue alarm and without making the child feel guilty about their bodies. Instead, messages about what is going on and the appropriate time and place for such activities help the child learn what is appropriate.