A Look at Self-Concept, Gender Identity, and Family Life 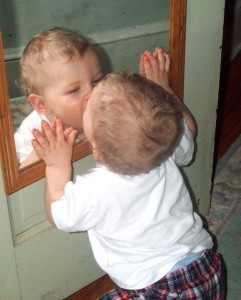 Early childhood is a time of forming an initial sense of self. A self-concept or idea of who we are, what we are capable of doing, and how we think and feel is a social process that involves taking into consideration how others view us. It might be said, then, that in order to develop a sense of self, you must have interaction with others. Interactionist theorists, Cooley and Mead offer two interesting explanations of how a sense of self develops.

Interactionism and Views of Self

Cooley: Charles Horton Cooley (1964) suggests that our self concept comes from looking at how others respond to us. This process, known as the looking-glass self involves looking at how others seem to view us and interpreting this as we make judgments about whether we are good or bad, strong or weak, beautiful or ugly, and so on. Of course, we do not always interpret their responses accurately so our self-concept is not simply a mirror reflection of the views of others. After forming an initial self-concept, we may use it as a mental filter screening out those responses that do not seem to fit our ideas of who we are. So compliments may be negated, for example. Think of times in your life when you feel self-conscious. The process of the looking-glass self is pronounced when we are preschoolers, or perhaps when we are in a new school or job or are taking on a new role in our personal lives and are trying to gauge our own performances. When we feel more sure of who we are we focus less on how we appear to others.

Mead: Herbert Mead (1967) offers an explanation of how we develop a social sense of self by being able to see ourselves through the eyes of others. There are two parts of the self: the “I” which is the part of the self that is spontaneous, creative, innate, and is not concerned with how others view us and the “me” or the social definition of who we are.

When we are born, we are all “I” and act without concern about how others view us. But the socialized self begins when we are able to consider how one important person views us. This initial stage is called “taking the role of the significant other”. For example, a child may pull a cat’s tail and be told by his mother, “No! Don’t do that, that’s bad” while receiving a slight slap on the hand. Later, the child may mimic the same behavior toward the self and say aloud, “No, that’s bad” while patting his own hand. What has happened? The child is able to see himself through the eyes of the mother. As the child grows and is exposed to many situations and rules of culture, he begins to view the self in the eyes of many others through these cultural norms or rules. This is referred to as “taking the role of the generalized other” and results in a sense of self with many dimensions. The child comes to have a sense of self as student, as friend, as son, and so on.

Exaggerated Sense of Self

One of the ways to gain a clearer sense of self is to exaggerate those qualities that are to be incorporated into the self. Preschoolers often like to exaggerate their own qualities or to seek validation as the biggest or smartest or child who can jump the highest. I wonder if messages given in children’s books or television shows that everyone is special are really meaningful to children who want to separate themselves from others on such qualities. This exaggeration tends to be replaced by a more realistic sense of self in middle childhood.

The trust and autonomy of previous stages develop into a desire to take initiative or to think of ideas and initiative action. Children may want to build a fort with the cushions from the living room couch or open a lemonade stand in the driveway or make a zoo with their stuffed animals and issue tickets to those who want to come. Or they may just want to get themselves ready for bed without any assistance. To reinforce taking initiative, caregivers should offer praise for the child’s efforts and avoid being critical of messes or mistakes. Soggy washrags and toothpaste left in the sink pales in comparison to the smiling face of a five year old that emerges from the bathroom with clean teeth and pajamas!

Another important dimension of the self is the sense of self as male or female. Preschool aged children become increasingly interested in finding out the differences between boys and girls both physically and in terms of what activities are acceptable for each. While 2 year olds can identify some differences and learn whether they are boys or girls, preschoolers become more interested in what it means to be male or female. This self-identification or gender identity is followed sometime later with gender constancy or the knowledge that gender does not change. Gender roles or the rights and expectations that are associated with being male or female are learned throughout childhood and into adulthood.

Freud and the phallic stage: Freud believed that masculinity and femininity were learned during the phallic stage or psychosexual development. During the phallic stage, the child develops an attraction to the opposite sexed parent but after recognizing that that parent is unavailable, learns to model their own behavior after the same sexed parent. The child develops his or her own sense of masculinity or femininity from this resolution. And, according to Freud, a person who does not exhibit gender appropriate behavior, such as a woman who competes with men for jobs or a man who lacks self-assurance and dominance, has not successfully completed this stage of development. Consequently, such a person continues to struggle with his or her own gender identity.

Chodorow and mothering: Chodorow, a neoFreudian, believed that mothering promotes gender stereotypic behavior. Mothers push their sons away too soon and direct their attention toward problem-solving and independence. As a result, sons grow up confident in their own abilities but uncomfortable with intimacy. Girls are kept dependent too long and are given unnecessary and even unwelcome assistance from their mothers. Girls learn to underestimate their abilities and lack assertiveness, but feel comfortable with intimacy.

Both of these models assume that early childhood experiences result in lifelong gender self-concepts. However, gender socialization is a process that continues throughout life. Children, teens, and adults refine and can modify their sense of self based on gender.

Learning through reinforcement and modeling: Learning theorists suggest that gender role socialization is a result of the ways in which parents, teachers, friends, schools, religious institutions, media and others send messages about what is acceptable or desirable behavior as males or females. This socialization begins early-in fact, it may even begin the moment a parent learns that a child is on the way. Knowing the sex of the child can conjure up images of the child’s behavior, appearance, and potential on the part of a parent. And this stereotyping continues to guide perception through life. Consider parents of newborns, shown a 7 pound, 20 inch baby, wrapped in blue (a color designating males) describe the child as tough, strong, and angry when crying. Shown the same infant in pink (a color used in the United States for baby girls), these parents are likely to describe the baby as pretty, delicate, and frustrated when crying. (Maccoby & Jacklin, 1987). Female infants are held more, talked to more frequently and given direct eye contact, while male infants play is often mediated through a toy or activity.

Sons are given tasks that take them outside the house and that have to be performed only on occasion while girls are more likely to be given chores inside the home such as cleaning or cooking that is performed daily. Sons are encouraged to think for themselves when they encounter problems and daughters are more likely to be given assistance even when they are working on an answer. This impatience is reflected in teachers waiting less time when asking a female student for an answer than when asking for a reply from a male student (Sadker and Sadker, 1994). Girls are given the message from teachers that they must try harder and endure in order to succeed while boys successes are attributed to their intelligence. Of course, the stereotypes of advisors can also influence which kinds of courses or vocational choices girls and boys are encouraged to make.

Friends discuss what is acceptable for boys and girls and popularity may be based on modeling what is considered ideal behavior or looks for the sexes. Girls tend to tell one another secrets to validate others as best friends while boys compete for position by emphasizing their knowledge, strength or accomplishments. This focus on accomplishments can even give rise to exaggerating accomplishments in boys, but girls are discouraged from showing off and may learn to minimize their accomplishments as a result.

Gender messages abound in our environment. But does this mean that each of us receives and interprets these messages in the same way? Probably not. In addition to being recipients of these cultural expectations, we are individuals who also modify these roles (Kimmel, 2008).

How much does gender matter? In the United States, gender differences are found in school experiences (even into college and professional school, girls are less vocal in the classrooms and much more at risk for sexual harassment from teachers, coaches, classmates, and professors), in social interactions and in media messages. The stereotypes that boys should be strong, forceful, active, dominant, and rational and that girls should be pretty, subordinate, unintelligent, emotional, and gabby are portrayed in children’s toys, books, commercials, video games, movies, television shows and music. In adulthood, these differences are reflected in income gaps between men and women where women working full-time earn about 74 percent the income of men, in higher rates of women suffering rape and domestic violence, higher rates of eating disorders for females, and in higher rates of violent death for men in young adulthood. Each of these differences will be explored further in subsequent chapters.

The impact in India: Gender differences in India can be a matter of life and death as preferences for male children have been strong historically and are still held, especially in rural areas. (WHO, 2010). Male children are given preference for receiving food, breast milk, medical care and other resources. It is no longer legal to give parents information on the sex of their developing child for fear that they will abort a female fetus. Clearly, gender socialization and discrimination still impact development in a variety of ways across the globe.