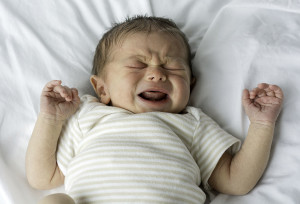 At birth, infants exhibit two emotional responses: attraction and withdrawal. They show attraction to pleasant situations that bring comfort, stimulation, and pleasure. And they withdraw from unpleasant stimulation such as bitter flavors or physical discomfort. At around two months, infants exhibit social engagement in the form of social smiling as they respond with smiles to those who engage their positive attention. Pleasure is expressed as laughter at 3 to 5 months of age, and displeasure becomes more specific fear, sadness, or anger between ages 6 and 8 months. This fear is often associated with the presence of strangers or the departure of significant others known respectively as stranger wariness and separation anxiety which appear sometime between 6 and 15 months. And there is some indication that infants may experience jealousy as young as 6 months of age (Hart & Carrington, 2002).

During the second year of life, children begin to recognize themselves as they gain a sense of self as object. This is illustrated in the 15 month old child’s ability to recognize one’s own reflection in a mirror. (The classic mirror test or rouge test involves showing a toddler a mirror after having secretly rubbed red coloring on the child’s nose. Children who are younger than 15 months of age may try to wipe the color from the mirror. But a 15 month old child may wipe the color from his or her own nose.) Once a child has achieved self-awareness, the child is moving toward understanding social emotions such as guilt, shame or embarrassment as well as sympathy or empathy.  These will require an understanding of the mental state of others that is acquired at around age 3 to 5 and will be explored in our next lesson (Berk, 2007).

The significance of early attachments: An attachment is desire for physical closeness with someone. The formation of attachments in infancy has been the subject of considerable research as attachments have been viewed as foundations for future relationships, as the basis for confidence and curiosity as toddlers, and as important influences on self-concept.

Measuring attachment styles: The classic model for studying styles of attachment involves having a caregiver and child come into a strange room filled with toys and observing the child’s reactions. A securely attached child will play with the toys and bring one to the caregiver to show and describe from time to time. The child is content and secure as he or she explores the situation. An insecurely-resistant child will cling to the caregiver and refuse to go and play. An insecure-avoidant attachment style is indicated by a child who is neither curious nor clingy; rather the child sits and waits until time to go.

Attachment styles vary in the amount of security and closeness felt in the relationship and they can change with new experience.   The type of attachment fostered in parenting styles varies by culture as well. For example, German parents value independence and Japanese mothers are typically by their children’s sides. As a result, the rate of insecure-avoidant attachments is higher in Germany and insecure-resistant attachments are higher in Japan. These differences reflect cultural variation rather than true insecurity, however (van Ijzendoorn and Sagi, 1999).  Keep in mind that methods for measuring attachment styles have been based on a model that reflects middle-class, U. S. values and interpretation. Newer methods for assessment attachment styles involve using a Q-sort technique in which a large number of behaviors are recorded on cards and the observer sorts the cards in a way that reflects the type of behavior that occurs within the situation.

As we explore styles of attachment below, consider how these are evidenced also in adult relationships.

Secure: A secure attachment is one in which the child feels confident that needs will be met in a timely and consistent way. In North America, this interaction may include emotional connection in addition to adequate care. However, even in cultures where mothers do not talk, cuddle, and play with their infants, secure attachments can develop (LeVine et. al., 1994). Secure attachments can form provided the child has consistent contact and care from one or more caregivers. Consistency of contacts may be jeopardized if the infant is cared for in a day care with a high turn-over of caregivers or if institutionalized and given little more than basic physical care. And while infants who, perhaps because of being in orphanages with inadequate care, have not had the opportunity to attach in infancy can form initial secure attachments several years later, they may have more emotional problems of depression, anger, or be overly friendly as they make adjustments (O’Connor et. als., 2003).

Insecure Resistant: This attachment style is marked by insecurity and a resistance to engaging in activities or play away from the caregiver. It is as if the child fears that the caregiver will abandon them and clings accordingly. (Keep in mind that clingy behavior can also just be part of a child natural disposition or temperament and does not necessarily reflect some kind of parental neglect.) The child may cry if separated from the caregiver and also cry upon their return. They seek constant reassurance that never seems to satisfy their doubt. This type of insecure attachment might be a result of not having needs met in a consistent or timely way. Consequently the infant is never sure that the world is a trustworthy place or that he or she can rely on others without some anxiety. A caregiver who is unavailable, perhaps because of marital tension, substance abuse, or preoccupation with work, may send a message to the infant he or she cannot rely on having needs met. A caregiver that attends to a child’s frustration can help teach them to be calm and to relax. But an infant who receives only sporadic attention when experiencing discomfort may not learn how to calm down.

Insecure-Avoidant: This too is an attachment style marked by insecurity. But this style is also characterized by a tendency to avoid contact with the caregiver and with others. This child may have learned that needs typically go unmet and learns that the caregiver does not provide care and cannot be relied upon for comfort, even sporadically. An insecure-avoidant child learns to be more independent and disengaged. Such a child might sit passively in a room filled with toys until it is time to go.

Disorganized: This represents the most insecure style of attachment and occurs when the child is given mixed, confused, and inappropriate responses from the caregiver. For example, a mother who suffers from schizophrenia may laugh when a child is hurting or cry when a child exhibits joy. The child does not learn how to interpret emotions or to connect with the unpredictable caregiver.