The Old Kingdom, spanning the Third to Sixth Dynasties of Egypt (2686-2181 BCE), saw the prolific construction of pyramids, but declined due to civil instability, resource shortages, and a drop in precipitation.

The Old Kingdom is the name commonly given to the period from the Third Dynasty through the Sixth Dynasty (2686-2181 BCE), when Egypt gained in complexity and achievement. The Old Kingdom is the first of three so-called “Kingdom” periods that mark the high points of civilization in the Nile Valley. During this time, a new type of pyramid (the step) was created, as well as many other massive building projects, including the Sphinx. Additionally, trade became more widespread, new religious ideas were born, and the strong centralized government was subtly weakened and finally collapsed.

The king (not yet called Pharaoh) of Egypt during this period resided in the new royal capital, Memphis. He was considered a living god, and was believed to ensure the annual flooding of the Nile. This flooding was necessary for crop growth. The Old Kingdom is perhaps best known for a large number of pyramids, which were constructed as royal burial places. Thus, the period of the Old Kingdom is often called “The Age of the Pyramids.”

Egypt’s Old Kingdom was also a dynamic period in the development of Egyptian art. Sculptors created early portraits, the first life-size statues, and perfected the art of carving intricate relief decoration. These had two principal functions: to ensure an ordered existence, and to defeat death by preserving life in the next world.

The first notable king of the Old Kingdom was Djoser (reigned from 2691-2625 BCE) of the Third Dynasty, who ordered the construction of the step pyramid in Memphis’ necropolis, Saqqara. It was in this era that formerly independent ancient Egyptian states became known as nomes, and were ruled solely by the king. The former rulers of these states were forced to assume the role of governors or tax collectors.

The Old Kingdom and its royal power reached a zenith under the Fourth Dynasty, which began with Sneferu (2613-2589 BCE). Using a greater mass of stones than any other king, he built three pyramids: Meidum, the Bent Pyramid, and the Red Pyramid. He also sent his military into Sinai, Nubia and Libya, and began to trade with Lebanon for cedar.

Sneferu was succeeded by his (in)famous son, Khufu (2589-2566 BCE), who built the Great Pyramid of Giza. After Khufu’s death, one of his sons built the second pyramid, and the Sphinx in Giza. Creating these massive projects required a centralized government with strong powers, sophistication and prosperity. Builders of the pyramids were not slaves but peasants, working in the farming off-season, along with specialists like stone cutters, mathematicians, and priests. Each household needed to provide a worker for these projects, although the wealthy could have a substitute. 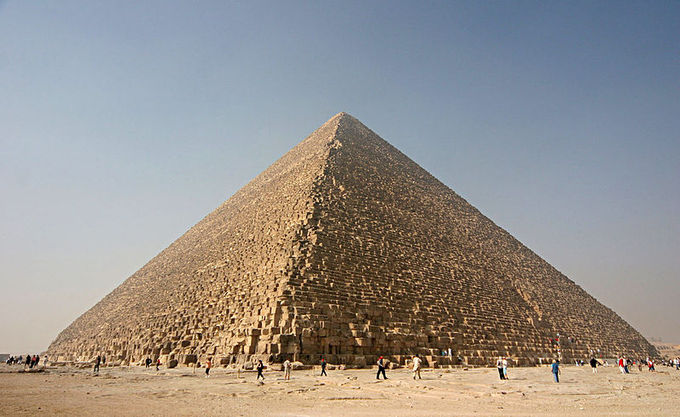 The Pyramid of Khufu at Giza: The Great Pyramid of Giza was built c. 2560 BCE, by Khufu during the Fourth Dynasty. It was built as a tomb for Khufu and constructed over a 20-year period. Modern estimates place construction efforts to require an average workforce of 14,567 people and a peak workforce of 40,000. 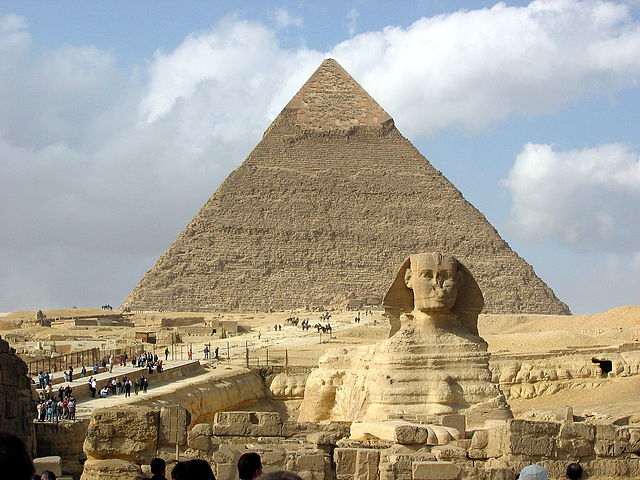 Great Sphinx of Giza and the pyramid of Khafre: The Sphinx is a limestone statue of a reclining mythical creature with a lion’s body and a human head that stands on the Giza Plateau on the west bank of the Nile in Giza, Egypt. The face is generally believed to represent the face of King Khafra.

The later kings of the Fourth Dynasty were king Menkaura (2532-2504 BCE), who built the smallest pyramid in Giza, Shepseskaf (2504-2498 BCE), and perhaps Djedefptah (2498-2496 BCE). During this period, there were military expeditions into Canaan and Nubia, spreading Egyptian influence along the Nile into modern-day Sudan.

Egyptians began to build ships to trade across maritime routes. Goods included ebony, incense, gold, and copper. They traded with Lebanon for cedar, and perhaps with modern-day Somalia for other goods. Ships were held together by tightly tied ropes.

The power of the king and central government declined during this period, while that of nomarchs (regional governors) increased.  These nomarchs were not part of the royal family. They passed down the title through their lineage, thus creating local dynasties that were not under the control of the king. Internal disorder resulted during and after the long reign of Pepi II (2278-2184 BCE), due to succession struggles, and eventually led to civil war. The final blow was a severe drought between 2200-2150 BCE, which prevented Nile flooding. Famine, conflict, and collapse beset the Old Kingdom for decades.

The First Intermediate Period, the Seventh to Eleventh dynasties, spanned approximately one hundred years (2181-2055 BCE), and was characterized by political instability and conflict between the Heracleopolitan and Theban Kings.

Describe the processes by which the First Intermediate Period occurred, and then transitioned into the Middle Kingdom

The First Intermediate Period (c. 2181-2055 BCE), often described as a “dark period” in ancient Egyptian history after the end of the Old Kingdom, spanned approximately 100 years. It included the Seventh, Eighth, Ninth, Tenth, and part of the Eleventh dynasties.

The First Intermediate Period was a dynamic time in history when rule of Egypt was roughly divided between two competing power bases: Heracleopolis in Lower Egypt, and Thebes in Upper Egypt. It is believed that political chaos during this time resulted in temples being pillaged, artwork vandalized, and statues of kings destroyed. These two kingdoms eventually came into military conflict. The Theban kings conquered the north, which resulted in the reunification of Egypt under a single ruler during the second part of the Eleventh dynasty.

The Old Kingdom, which preceded this period, fell for numerous reasons. One was the extremely long reign of Pepi II (the last major king of the Sixth Dynasty), and the resulting succession issues. Another major problem was the rise in power of the provincial nomarchs. Toward the end of the Old Kingdom, the positions of the nomarchs had become hereditary, creating family legacies independent from the king. They erected tombs in their own domains and often raised armies, and engaged in local rivalries. A third reason for the dissolution of centralized kingship was the low level of the Nile inundation, which may have resulted in a drier climate, lower crop yields, and famine.

The Seventh and Eighth Dynasties at Memphis

The Seventh and Eighth dynasties are often overlooked because very little is known about the rulers of these two periods. The Seventh Dynasty was most likely an oligarchy based in Memphis that attempted to retain control of the country. The Eighth Dynasty rulers, claiming to be the descendants of the Sixth Dynasty kings, also ruled from Memphis.

After the obscure reign of the Seventh and Eighth dynasty kings, a group of rulers rose out of Heracleopolis in Lower Egypt, and ruled for approximately 94 years. These kings comprise the Ninth and Tenth Dynasties, each with 19 rulers.

The founder of the Ninth Dynasty, Wahkare Khety I, is often described as an evil and violent ruler who caused much harm to the inhabitants of Egypt. He was seized with madness, and, as legend would have it, was eventually killed by a crocodile. Kheti I was succeeded by Kheti II, also known as Meryibre, whose reign was essentially peaceful but experienced problems in the Nile Delta. His successor, Kheti III, brought some degree of order to the Delta, although the power and influence of these Ninth Dynasty kings were still insignificant compared to that of the Old Kingdom kings.

A distinguished line of nomarchs rose out of Siut (or Asyut), which was a powerful and wealthy province in the south of the Heracleopolitan kingdom. These warrior princes maintained a close relationship with the kings of the Heracleopolitan royal household, as is evidenced by the inscriptions in their tombs. These inscriptions provide a glimpse at the political situation that was present during their reigns, and describe the Siut nomarchs digging canals, reducing taxation, reaping rich harvests, raising cattle herds, and maintaining an army and fleet. The Siut province acted as a buffer state between the northern and southern rulers and bore the brunt of the attacks from the Theban kings.

The Theban kings are believed to have been descendants of Intef or Inyotef, the nomarch of Thebes, often called the “Keeper of the Door of the South. ” He is credited with organizing Upper Egypt into an independent ruling body in the south, although he himself did not appear to have tried to claim the title of king. Intef II began the Theban assault on northern Egypt, and his successor, Intef III, completed the attack and moved into Middle Egypt against the Heracleopolitan kings. The first three kings of the Eleventh Dynasty (all named Intef) were, therefore, also the last three kings of the First Intermediate Period. They were succeeded by a line of kings who were all called Mentuhotep. Mentuhotep II, also known as Nebhepetra, would eventually defeat the Heracleopolitan kings around 2033 BCE, and unify the country to continue the Eleventh Dynasty and bring Egypt into the Middle Kingdom. 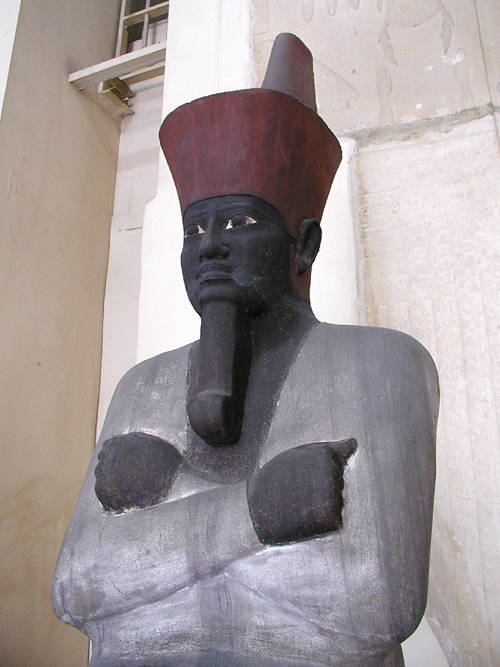