The Persian Wars led to the rise of Athens as the head of the Delian League.

Explain the consequences of the Persian Wars.

The Persian Wars (499-449 BCE) were fought between the Achaemenid Empire and the Hellenic world during the Greek classical period. The conflict saw the rise of Athens, and led to its Golden Age.

Origins of the Conflict

Greeks of the classical period believed, and historians generally agree, that in the aftermath of the fall of Mycenaean civilization, many Greek tribes emigrated and settled in Asia Minor. These settlers were from three tribal groups: the Aeolians, Dorians, and Ionians. The Ionians settled along the coasts of Lydia and Caria, and founded 12 towns that remained politically separate from one another, although they did recognize a shared cultural heritage. This formed the basis for an exclusive Ionian “cultural league.” The Lydians of western Asia Minor conquered the cities of Ionia, which put the region at conflict with the Median Empire, the precursor to the Achaemenid Empire of the Persian Wars, and a power that the Lydians opposed.

In 553 through 550 BCE, the Persian prince Cyrus led a successful revolt against the last Median king Astyages, and founded the Achaemenid Empire. Seeing an opportunity in the upheaval, the famous Lydian king Croesus asked the oracle at Delphi whether he should attack the Persians in order to extend his realm. According to Herodotus, he received the ambiguous answer that “if Croesus was to cross the Halys [River] he would destroy a great empire.” Croesus chose to attack, and in the process he destroyed his own empire, with Lydia falling to Prince Cyrus. The Ionians sought to maintain autonomy under the Persians as they had under the Lydians, and resisted the Persians militarily for some time. However, due to their unwillingness to rise against the Lydians during previous conflicts, they were not granted special terms. Finding the Ionians difficult to rule, the Persians installed tyrants in every city, as a means of control. 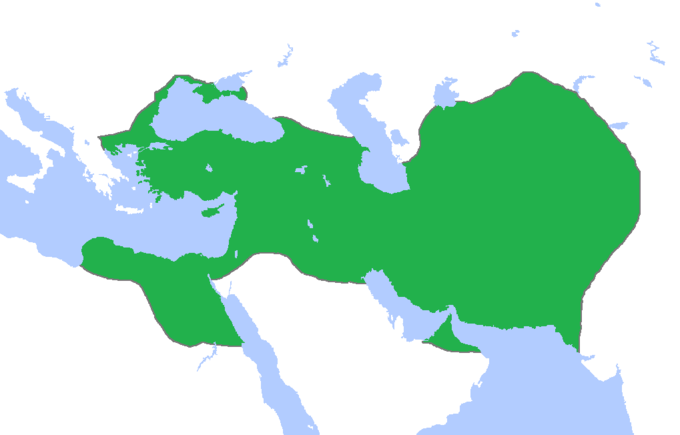 In 499 BCE, Greeks in the region rose up against Persian rule in the Ionian Revolt. At the heart of the rebellion lay a deep dissatisfaction with the tyrants who were appointed by the Persians to rule the local Greek communities. Specifically, the riot was incited by the Milesian tyrant Aristagoras, who in the wake of a failed expedition to conquer Naxos, utilized Greek unrest against Persian king Darius the Great to his own political purposes.

Athens and other Greek cities sent aid, but were quickly forced to back down after defeat in 494 BCE, at the Battle of Lade. As a result, Asia Minor returned to Persian control. Nonetheless, the Ionian Revolt remains significant as the first major conflict between Greece and the Persian Empire, as well as the first phase of the Persian Wars. Darius vowed to exact revenge against Athens, and developed a plan to conquer all Greeks in an attempt to secure the stability of his empire.

In 492 BCE, the Persian general, Mardonius, led a campaign through Thrace and Macedonia. During this campaign, Mardonius re-subjugated Thrace and forced Macedonia to become a fully submissive client of the Persian Empire, whereas before they had maintained a broad degree of autonomy.
While victorious, he was wounded and forced to retreat back into Asia Minor. Additionally, he lost his 1200-ship naval fleet to a storm off the coast of Mount Athos. Darius sent ambassadors to all Greek cities to demand full submission in light of the recent Persian victory, and all cities submitted, with the exceptions of Athens and Sparta, both of which executed their respective ambassadors. These actions signaled Athens’ continued defiance and brought Sparta into the conflict.

In 490 BCE, approximately 100,000 Persians landed in Attica intending to conquer Athens, but were defeated at the Battle of Marathon by a Greek army of 9,000 Athenian hoplites and 1,000 Plateans, led by the Athenian general, Miltiades. The Persian fleet continued to sail to Athens but, seeing it garrisoned, decided not to attempt an assault. The Battle of Marathon was a watershed moment in the Persian Wars, in that it demonstrated to the Greeks that the Persians could be defeated. It also demonstrated the superiority of the more heavily armed Greek hoplites. 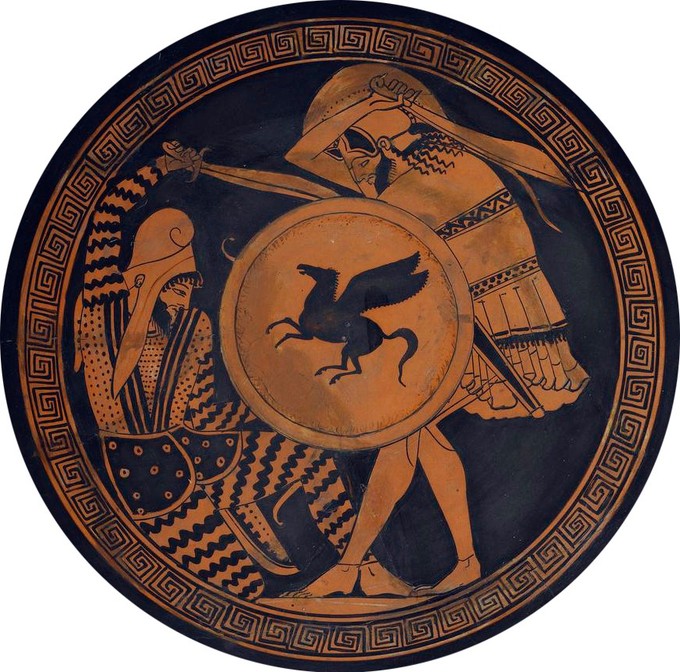 Greek-Persian duel: Depiction of a Greek hoplite and a Persian warrior fighting each other on an ancient kylix.

After the failure of the first Persian invasion, Darius raised a large army with the intent of invading Greece again. However, in 486 BCE, Darius’s Egyptian subjects revolted, postponing any advancement against Greece. During preparations to march on Egypt, Darius died and his son, Xerxes I, inherited the throne. Xerxes quickly crushed the Egyptians and resumed preparations to invade Greece.

In 480 BCE, Xerxes sent a much more powerful force of 300,000 soldiers by land, with 1,207 ships in support, across a double pontoon bridge over the Hellespont. This army took Thrace before descending on Thessaly and Boetia, whilst the Persian navy skirted the coast and resupplied the ground troops. The Greek fleet, meanwhile, dashed to block Cape Artemision. After being delayed by Leonidas I, the Spartan king of the Agiad Dynasty, at the Battle of Thermopylae (a battle made famous due to the sheer imbalance of forces, with 300 Spartans facing the entire Persian Army), Xerxes advanced into Attica, where he captured and burned Athens. But the Athenians had evacuated the city by sea, and under the command of Themistocles, defeated the Persian fleet at the Battle of Salamis.

In 483 BCE, during the period of peace between the two Persian invasions, a vein of silver ore had been discovered in the Laurion (a small mountain range near Athens), and the ore that was mined there paid for the construction of 200 warships to combat Aeginetan piracy. A year later, the Greeks, under the Spartan Pausanias, defeated the Persian army at Plataea. Meanwhile, the allied Greek navy won a decisive victory at the Battle of Mycale, destroying the Persian fleet, crippling Xerxe’s sea power, and marking the ascendency of the Greek fleet. Following the Battle of Plataea and the Battle of Mycale, the Persians began withdrawing from Greece and never attempted an invasion again.

The Battle of Mycale was in many ways a turning point, after which the Greeks went on the offensive against the Persian fleet. The Athenian fleet turned to chasing the Persians from the Aegean Sea, and in 478 BCE, the fleet then proceeded to capture Byzantium. In the course of doing so, Athens enrolled all the island states, and some mainland states, into an alliance called the Delian League— so named because its treasury was kept on the sacred island of Delos, whose purpose was to continue fighting the Persian Empire, prepare for future invasions, and organize a means of dividing the spoils of war. The Spartans, although they had taken part in the war, withdrew into isolation afterwards. The Spartans believed that the war’s purpose had already been reached through the liberation of mainland Greece and the Greek cities of Asia Minor. Historians also speculate that Sparta was unconvinced of the ability of the Delian League to secure long-term security for Asian Greeks. The Spartan withdrawal from the League allowed Athens to establish unchallenged naval and commercial power within the Hellenic world.

Effects of the Persian Wars

Despite their victories in the Persian Wars, the Greek city-states emerged from the conflict more divided than united.

Aftermath of the Persian Wars

As a result of the allied Greek success, a large contingent of the Persian fleet was destroyed and all Persian garrisons were expelled from Europe, marking an end of Persia’s advance westward into the continent. The cities of Ionia were also liberated from Persian control. Despite their successes, however, the spoils of war caused greater inner conflict within the Hellenic world. The violent actions of Spartan leader Pausanias at the siege of Byzantium, for instance, alienated many of the Greek states from Sparta, and led to a shift in the military command of the Delian League from Sparta to Athens. This set the stage for Sparta’s eventual withdrawal from the Delian League.

Following the two Persian invasions of Greece, and during the Greek counterattacks that commenced after the Battles of Plataea and Mycale, Athens enrolled all island and some mainland city-states into an alliance, called the Delian League, the purpose of which was to pursue conflict with the Persian Empire, prepare for future invasions, and organize a means of dividing the spoils of war. The Spartans, although they had taken part in the war, withdrew from the Delian League early on, believing that the war’s initial purpose had been met with the liberation of mainland Greece and the Greek cities of Asia Minor. Historians also speculate that Sparta decided to leave the League for pragmatic reasons, remaining unconvinced that it was possible to secure long-term security for Greeks residing in Asia Minor, and as a result of their unease with Athenian efforts to increase their power. Once Sparta
withdrew from the Delian League after the Persian Wars, it reformed the Peloponnesian League, which had originally been formed in the 6th century and provided the blueprint for what was now the Delian League. The Spartan withdrawal from the League had the effect, however, of allowing Athens to establish unchallenged naval and commercial power, unrivaled throughout the Hellenic world. In fact, shortly after the League’s inception, Athens began to use the League’s navy for its own purposes, which frequently led it into conflict with other, less powerful League members. 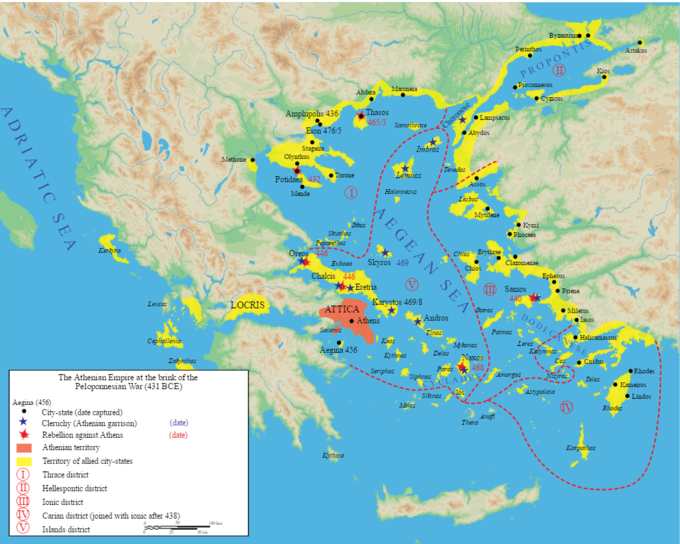 A series of rebellions occurred between Athens and the smaller city-states that were members of the League. For example, Naxos was the first member of the League to attempt to secede, in approximately 471 BCE. It was later defeated and forced to tear down its defensive city walls, surrender its fleet, and lost voting privileges in the League. Thasos, another League member, also defected when, in 465 BCE, Athens founded the colony of Amphipolis on the Strymon River, which threatened Thasos’ interests in the mines of Mt Pangaion. Thasos allied with Persia and petitioned Sparta for assistance, but Sparta was unable to help because it was facing the largest helot revolution in its history. Nonetheless, relations between Athens and Sparta were soured by the situation. After a three-year long siege, Thasos was recaptured and forced back into the Delian League, though it also lost its defensive walls and fleet, its mines were turned over to Athens, and the city-state was forced to pay yearly tribute and fines. According to Thucydides, the siege of Thasos marked the transformation of the League from an alliance into a hegemony.

Following their defeats at the hands of the Greeks, and plagued by internal rebellions that hindered their ability to fight foreign enemies, the Persians adopted a policy of divide-and-rule. Beginning in 449 BCE, the Persians attempted to aggravate the growing tensions between Athens and Sparta, and would even bribe politicians to achieve these aims. Their strategy was to keep the Greeks distracted with in-fighting, so as to stop the tide of counterattacks reaching the Persian Empire. Their strategy was largely successful, and there was no open conflict between the Greeks and Persia until 396 BCE, when the Spartan king Agesilaus briefly invaded Asia Minor.