In 1833 the Government passed a Factory Act to improve conditions for children working in factories. Young children were working very long hours in workplaces where conditions were often terrible. The basic act was as follows:

However, the passing of this act did not mean that the mistreatment of children stopped overnight. Using these sources, investigate how the far the act had solved the problems of child labour.

2. This is a piece of a document detailing which companies broke the law. 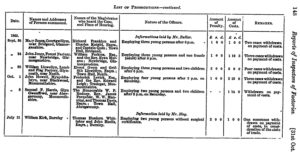 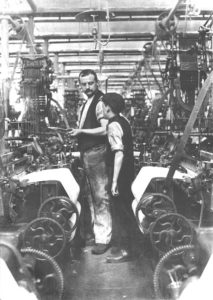 4. You are one of the four factory inspectors in 1836 trying to enforce the Factory Act. You have seen the evidence of abuse of the the law and you are unhappy with the present system. Write a letter to the Home Secretary suggesting ways to improve the law and better methods of enforcing it.

As the Industrial Revolution gathered pace thousands of factories sprang up all over the country. There were no laws relating to the running of factories as there had been no need for them before. As a result, dangerous machinery was used that could, and frequently did, cause serious injuries to workers. To add to these dangers, people were required to work incredibly long hours – often through the night. Perhaps one of the worst features of this new industrial age was the use of child labour. Very young children worked extremely long hours and could be severely punished for any mistakes. Arriving late for work could lead to a large fine and possibly a beating. Dozing at a machine could result in the accidental loss of a limb.

People began to realise how bad these conditions were in many factories and started to campaign for improvements. There was a lot of resistance from factory owners who felt it would slow down the running of their factories and make their products more expensive. Many people also did not like the government interfering in their lives. Some parents, for instance, needed their children to go out to work from a young age, as they needed the money to help feed the family.

Not all factory owners kept their workers in bad conditions however. Robert Owen, who owned a cotton mill in Lanark, Scotland, built the village of New Lanark for his workers. Here they had access to schools, doctors and there was a house for each family who worked in his mills.

By 1833, the Government passed what was to be the first of many acts dealing with working conditions and hours. At first, there was limited power to enforce these acts but as the century progressed the rules were enforced more strictly. Nonetheless, the hours and working conditions were still very tough by today’s standards, and no rules were in place to protect adult male workers.

Listed below are details of the legislation (laws) that was introduced to improve working conditions in factories.