The Portuguese first traded for African slaves in 1441. They did not create the slave trade; Africans had held slaves and traded them long before the Europeans entered the market. African peoples throughout West Africa took captives in warfare and kept slaves as a means of incorporating foreigners into the society. African slavery therefore differed greatly from the European norms of slavery that became established in the New World. For instance, slaves in Africa were not property; they retained some rights as a person and as an individual. The condition of slavery was not inherited; if a slave had children, then the children were born free. Moreover, the condition of slavery might not last an entire lifetime but instead a period of years.

The Trans-Atlantic slave trade emerged with the colonization of the New World. As the need for labor grew, so too did the trade. At first, some Europeans tried to use force in acquiring slaves, but this method proved impracticable on any scale. The only workable method was acquiring slaves through trade with Africans, since they controlled all trade into the interior. Typically, Europeans were restricted to trading posts, or feitorias, along the coast. Captives were brought to the feitorias , where they were processed as cargo rather than as human beings. Slaves were kept imprisoned in small, crowded rooms, segregated by sex and age, and “fattened up” if they were deemed too small for transport. They were branded to show what merchant purchased them, that taxes had been paid, and even that they had been baptized as a Christian. The high mortality rate of the slave trade began on the forced march to the feitorias and in a slave’s imprisonment within them; the mortality rate continued to climb during the second part of the journey, the Middle Passage. 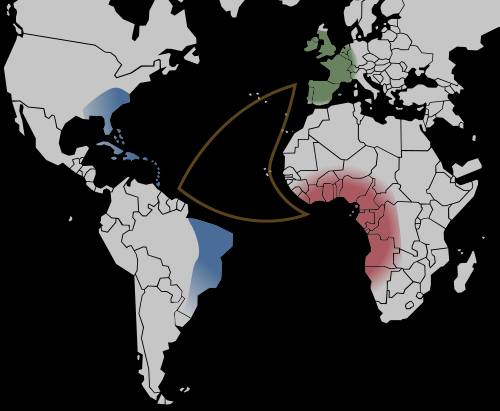 The Middle Passage, the voyage across the Atlantic from Africa to the Americas, comprised the middle leg of the Atlantic Triangle Trade network, which traded manufactured goods such as beads, mirrors, cloth, and firearms to Africa for slaves. Slaves were then carried to the Americas, where their labor would produce items of the last leg of the Triangle Trade such as sugar, rum, molasses, indigo, cotton, and rice, to name a few. The Middle Passage itself was a hellish experience. Slaves were segregated by sex, often stripped naked, chained together, and kept in extremely tight quarters for up to twenty-three hours a day; as many as 12-13 percent died during this dehumanizing experience. Although we will likely never know the exact number of people who were enslaved and brought to the Americas, the number is certainly larger than ten million. 43  (Links to an external site.)Links to an external site.

The Age of Discovery brought many changes to West Africa. In some areas, the slave trade had the effect of breaking down societies. For instance, in the early nineteenth century the great Yoruba confederation of states began to break down due to civil wars. Conflicts escalated as participants sold slaves to acquire European weapons; these weapons were then used to acquire more slaves, thus creating a vicious cycle. Other groups grew and gained power because of their role in the slave trade, perhaps the most prominent being the West African kingdom of Dahomey.

The Kingdom of Dahomey was established in the 1720s. Dahomey was built on the slave trade; kings used profits from the slave trade to acquire guns, which in turn were used to expand their kingdom by conquest and incorporation of smaller kingdoms. Most slaves were acquired either by trade with the interior or by raids into the north and west into Nigeria; Dahomey took advantage of the civil wars among the Yoruba to gain access to a ready source of captives.

European trade agents were kept isolated in the main trade port of Whydah. Only a privileged few were allowed into the interior of the kingdom to have an audience with the king; as a result, only a few contemporary sources describe the kingdom. Like his European counterparts, the king of Dahomey was an absolute monarch, possessing great power in a highly centralized state. All trade with Europeans was a royal monopoly, jealously guarded by the kings. The monarchs never allowed Europeans to deal directly with the people of the kingdom, keeping all profits for the state, and allowing this highly militarized state to grow and expand.

On the eve of the sixteenth century, Africa was a continent of tremendous diversity and home to hundreds of cultures, languages, and political states. Most of the empires of the past two centuries were in decline, though the demand for their goods continued and the city states of East Africa were viable trading depots. The trans-Saharan trade routes, in place since the earliest years of the Common Era, still linked East Africa, West Africa, and the Islamic sultanates in the North. It is not surprising, however, that the various regions in Africa experienced the changes brought by the Age of Discovery in different ways. Western and Central Africa were greatly influenced by the slave trade. The Kingdom of Dahomey provides an example of one of the ways that African groups were influenced by and participated in both the Age of Discovery and the Trans-Atlantic slave trade.

1. The region of Africa most directly involved in the Trans-Atlantic slave trade was

2. The Middle Passage was a part of the Indian Ocean trade network.

3. Which of the following empires was not in West Africa?

4. Much of what we know about the cultures of East Africa comes from the writings of:

5. The empire of Mali was created by which of the following?

6. The Kingdom of Dahomey controlled the slave trade in their region by

a. refusing to trade with anyone but the Dutch.

b. keeping Europeans confined to the port at Whydah.

c. making European merchants trade with only the king and no others.

e. all of the above.