1789 is one of the most significant dates in history – famous for the revolution in France with its cries of ‘Liberté! Egalité! Fraternité!’ that led to the removal of the French upper classes. The French Revolution didn’t just take place in 1789. It actually lasted for another six years, with far more violent and momentous events taking place in the years after 1789. However, here we examine the British reaction to the events in France during this famous year – were the British government extremely worried or did they see it as merely a few minor disturbances?

Looking at primary source material from 1789, including a London newspaper report, together with both official and personal letters sent from Paris, you will be asked to assess and investigate the reaction. The significance of 1789 is now well known, but did anybody at the time even dare to suggest how important it was?

Let’s look at the evidence to find out. 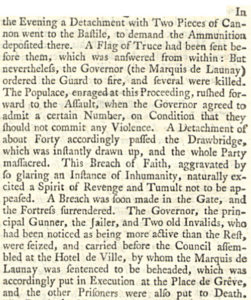 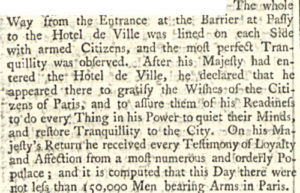 5. Look at Source 5. This is an extract from a confidential report from the British Ambassador.

6. Look at Source 6. This is another extract from the report seen in Source 5. 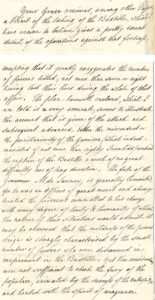 7. Look at Source 7. This is a further extract from the report seen in Source 5 and 6. 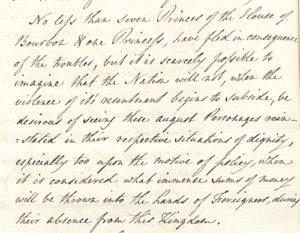 8. Look again at Sources 1-7. Using all the available sources, decide which of these descriptions best fit each source:

Explain the reasons for your decisions.

9. Using all your previous work, write a detailed paragraph explaining how seriously the British took the events of July 1789.

Use your source evidence effectively and think about the following issues:

The French Revolution began in 1789 and lasted until 1794. King Louis XVI needed more money, but had failed to raise more taxes when he had called a meeting of the Estates General. This instead turned into a protest about conditions in France. On July 14 1789 the Paris mob, hungry due to a lack of food from poor harvests, upset at the conditions of their lives and annoyed with their King and Government, stormed the Bastille fortress (a prison). This turned out to be more symbolic than anything else as only four or five prisoners were found.

In October 1789, King Louis and his family were moved from Versailles (the Royal palace) to Paris. He tried to flee in 1791, but was stopped and forced to agree to a new form of government. Replacing the power of the King, a ‘legislative assembly’ governed from October 1791 to September 1792, and was then replaced by the ‘National Convention’. The Republic of France was declared, and soon the King was put on trial. The Revolution became more and more radical and violent. King Louis XVI was executed on January 21 1793. In the six weeks that followed some 1,400 people who were considered potential enemies to the Republic were executed in Paris.

Many historians now regard the French Revolution as a turning point in the history of Europe, but also in North America where many of the same ideas influenced the Declaration of Independence and the American Revolution. The famous slogan ‘Liberty, Equality and Fraternity’ called for every person’s right to freedom and equal treatment. Across France and the rest of Europe the consequences of the Revolution were huge. There were many new developments including the fall of the monarchy, changes in society with the rise of the middle class, and the growth of nationalism.