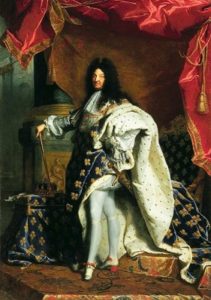 Je m’en vais, mais l’État demeurera toujours. (I am leaving, but the State will remain forever.)

Louis’ impact on French history require a bit of context: namely, the fact that feudalism is decentralized. In theory, in a feudal government, when the king says, “Go do this,” everyone has to obey, but in practice the other knights, barons, viscounts, counts, barons, dukes and princes have some leeway to hem, haw and etc. Plus there was the fact that there were innumerable customs, traditions, and laws that, while the king could try to override them, any attempt to change them would generally provoke concerted opposition from the lords if he tried doing that. And because feudal lords’ status in the system was built on their access to resources and therefore raise armies, the monarch could only do so much to impose his will by force or fiat. Even when the king’s army was biggest, strongest, and best in the country (and it often wasn’t), it was rarely so strong that it could be trusted to win every fight, and even when it could, not every political dispute was worth turning into a civil war. A feudal monarch thus relied on his own charisma and influence, rather than the power or resources of his office, at least partially… And Louis’s father, the thirteenth of his name, was a bit limp in this area, despite having The Three Musketeers working for him.

Louis XIV fixed this by doing his best to turn himself into an “absolute monarch.” He did this by using his charisma—in which he was not lacking—combined with some bending and reviving of old traditions to get the nobles to wait on him hand and foot. Seriously, they treated him like they were teen girls and he was a Teen Idol. You see, one power the king always had was the power to invite lords to come to him and join his court—not because he could really “force” anyone to come, mind you, but because refusing such an invitation was seen as the height of ingratitude and therefore declining the king’s invitation was not a decision taken lightly. Once at court, he could hand out official roles and duties in the court to the various nobles, which he did with abandon; by the end of his reign, it took 200 noble lords to help him get up and get dressed in the morning (officially, anyway—unofficially, he woke up two hours earlier to handle the royal paperwork). With the lords all at Versailles, Louis could keep track of who was fawning over him, reward them appropriately, and essentially keep them prisoner, able to stay only on his sufferance and not able to go home to their own fiefs and interfere with his rule. This was a genius political move, but it allowed Louis free rein (or free reign) as a—still limited by fundamental laws of the kingdom—autocrat, which he exploited without compunction.

This being said, the problem with a Cult of Personality is that you need a successor of equal ability and charisma, or else the whole thing will collapse when you die. Louis XIV’s successor, Louis XV (actually his great-grandson) was nowhere near as effective, and his successor, Louis XVI (his grandson), despite being a lot more able than he generally got credit for, was severely lacking in charisma and thus could not prevent the crisis of absolutist France devolving into the Revolution of 1789. Later historians feel that the Revolution was largely a consequence of Louis XIV’s impossible-to-sustain absolute monarchy. They note that Louis XIV was inspired to take power as a result of the English Civil War and the rise of Cromwell (Charles II—the elder son of Louis’ aunt Henriette Marienote —was an exile in France much of this timenote ). The changes in England as a result of the Civil War and regicide, which led to greater power in the hands of Parliament (consolidated subsequently in the Glorious Revolution) did not create a parallel movement in France in the same period. This meant that civil institutions did not develop in France in the same way to erode state power, rather Louis XIV reformed and centralized power from the top. This reactionary approach meant that changes came belatedly in France and in a necessarily drastic form. Indeed, the political commentator Alexis de Tocqueville noted that Britain’s extension of more autonomy to its localities and its overseas colonies allowed them to become more innovative and dynamic than a France that controlled everything from the top down. This in turn ultimately allowed Britain to become more powerful than France during the 18th century. However, Tocqueville also noted that the signal achievement of the Jacobins during the Revolution was to forge a unified centralized French state, a process that Louis XIV had begun, which they had completed and which Napoleon permanently consolidated with his Civil Code. Interestingly, the anti-Bourbon Napoleon himself had some respect for his predecessor, describing Louis XIV as “the only King of France worthy of the name”.