After reading this chapter you should be able to:

In efforts to explain the world’s population to young children, David J. Smith asks children to imagine the world as a small village so they can understand the vast population figures in a more comprehensible way. In 2012, the world’s population was 7,050,000,000 (Smith 7). Instead of talking about numbers of this magnitude, he represents the world as 100 people, where one imaginary person represents 70,500,000 people from the real world. Using Smith’s model, we can more easily examine what nationalities make up the world’s population, what languages they speak, how old they are, and how these statistics involve wealth and education.

Here are some interesting facts from Smith’s global village (8). Of the 100 people living in the village:

So, how do these 100 people talk with one another? While there are nearly 6,000 languages spoken in this village, more than 50% of the villagers speak one of these eight (10):

To see a large scale of diversity around the world check out World Diversity Patterns! 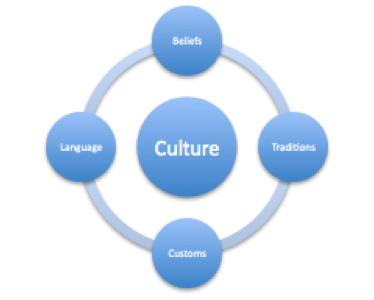 Although there are 36 school-aged villagers (5-24 years), only 30 of them go to school, and there is only one teacher. Of the people old enough to read, 14 cannot read at all. Male villagers are taught to read more than females (Smith 21). While 68 villagers breathe clean air, the remaining 32 villagers breathe unhealthy air due to pollution (Smith 18). If each villager earned a similar annual income, each one would have $10,300 per year. Instead, the richest 10 people in the village earn more than $87,500 a year, the poorest 10 villagers earn less than $2 a day, while the remaining 80 earn somewhere in between. As the average annual cost of food and shelter in the village is more than $5,000, many people go without these basic necessities (Smith 22).

Moreover, it probably does not surprise you that the people with less money are also likely not to have electricity and education. Besides simple cultural differences such as what language one speaks or the foods they prefer; cultural identity impacts individuals’ accessibility to certain resources such as shelter, electricity, running water, health care, education, and political and legal systems.