We encode and decode messages everyday. As we take in messages, we use a number of criteria to evaluate them. We may ask, “Was the message good, bad, or both?” “Was it effective or ineffective?” “Did it achieve its intended outcome?” “How should I respond to the message?” Think about the last movie you watched. Did you have a conversation about the movie with others? Did that conversation include commentary on various parts of the film such as the set design, dialogue, plot, and character development? If so, you already have a taste of the variety of elements that go into rhetorical research. Simply stated, rhetorical methods of research are sophisticated and refined ways to evaluate messages. Foss explains that we use rhetorical approaches as a way “of systematically investigating and explaining symbolic acts and artifacts for the purpose of understanding rhetorical processes” (6).

1. Determine a focus of study such as political speeches, television shows or genres, movies or movie genres, commercials, magazine texts, the rhetoric of social movement organizations, music lyrics, visual art, public memorials, etc.
2. Choose a rhetorical research method to evaluate and critique rhetorical acts and/or messages.
3. Analyze the message(s) of focus such as a Presidential address by using a particular rhetorical method.
4. Interpret the implications of the rhetorical act, as well as the rhetorical act itself. For example, a scholar might choose to rhetorically research television violence and provide interpretations regarding the implications of television violence on viewers.
5. Share the results of research. From sharing research comes the opportunity to improve our ability to create and evaluate effective messages. We can also use what we learn from rhetorical research to shape the ways messages are constructed and delivered.

Types of Methods for Rhetorical Criticism 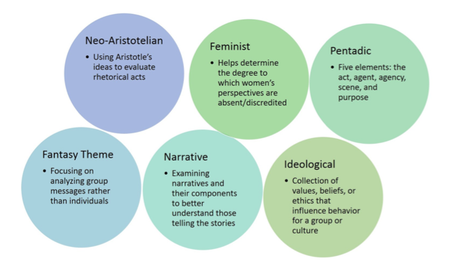 Rhetorical research methodologies help us better determine how and why messages are effective or ineffective, as well as the outcomes of messages on audiences. Think about advertising campaigns. Advertising agencies spend millions of dollars evaluating the effectiveness of their messages on audiences. The purpose of advertising is to persuade us to act in some way, usually the purchasing of products or services. Advertisers not only evaluate the effectiveness of their messages by determining the amount of products sold, they also evaluate effectiveness by looking at audience response to the messages within the current cultural and social contexts.