At this point, you are probably aware of the cultural groups to which you belong (i.e., “I am a Latino, middle-class, (almost) college-educated male”). Do you remember the process of coming to awareness of your cultural identity—when did you know you were white and what that meant? Was it during childhood, as a teenager, or reading this chapter? Has your understanding, or acceptance, of your racial heritage changed during the course of your lifetime? For most people it does. Just as Piaget organized the growth of children according to various stages of development, cultural scholars have similarly organized racial awareness along models and stages. Before explaining the various models, let us make a couple general comments about models. One, a model is not the thing it represents. Is the model car you played with as a child the same as the actual automobile? What were the differences? Size, time, maneuverability, details? These same kinds of differences exist between the model of racial identity development and the actual personal process. But just like the car model gives a fairly accurate picture of the actual automobile so do the racial identity models. Two, these models are general and not meant to fit perfectly to every individual’s experience. With that said, let us examine the process of coming to an understanding of our racial identity.

To better understand this complex process, and in recognition of the above discussion regarding the distinctions in experiences for various cultural groups, we will present four racial identity models—-Minority, Majority, Bi-racial, and Global Nomads.

Because people who identify as members of a minority group in the United States tend to stand out or get noticed as “other” or “different,” they also tend to become aware of their identity sooner than individuals who are part of the majority group. Since White is still considered normative in the United States, White people may take their identity, and the corresponding privilege, for granted. While we are using the following four stages of development to refer to racial and ethnic identity development, they may also be useful when considering other minority aspects of our identity such as gender, class, or sexual orientation (Ponterotto and Pendersen). Moreover, there is no set age or time period that a person reaches or spends in a particular stage, and not everyone will reach the final stage.

The following model was developed by Rita Hardiman in 1994 and contains some similarities with Phinney’s minority identity development model.

Originally, people thought that bi-racial individuals followed the development model of minority individuals, but given that we now know that race and the meanings about race are socially constructed, it makes sense to realize that a person of mixed racial ancestry is likely to be viewed differently (from both the dominant culture and the individual’s own culture) than a minority individual. Thus, they are likely to experience a social reality unique to their experience. The following five-stage model is derived from the work of W.S. Carlos Poston.

People who move around a lot may develop a multicultural identity as a result of their extensive international travel. International teachers, business people, and military personnel are examples of global nomads (Martin and Nakayama 138). One of the earlier theories to describe this model of development was called the U-curve theory because the stages were thought to follow the pattern of the letter U. This model has since been revised in the form of a W, or a series of ups and downs; this pattern is thought to better represent the up and down nature of this process.

After exploring the identity development models for minority, majority, bi-racial individuals, and global nomads, we hope you have some understanding that a person’s identity development is a process, occurs in stages, and is specific to the individual and cultural groups. We also hope you noticed that identity development is a social process—it occurs within our relationships with other people and the larger society. Not surprisingly, language is a key factor in shaping our own self-perception as well as the attitudes and beliefs we hold about other cultural groups. In the next section, we will explore the role that language plays in intercultural communication.

Saying that language plays a vital role in intercultural communication and relationships probably seems obvious to you at this point. But do you know how and why? Let us now turn to a more detailed explanation of the power of language. Specifically, we will discuss ascription and avowal, the Sapir-Wharf hypothesis, labels and stereotypes, and reclaiming. 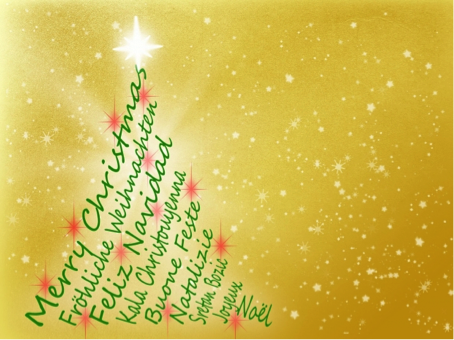 As you have been reflecting on your own identity, do you think it matches up with how others see you? The way people present themselves is referred to as the avowal process. The opposite of that is ascription, how others see us: the qualities or attributes that are ascribed to us. Part of your avowed identity is probably that of a college student and you hope that others see you this way too. Perhaps one of your hobbies is fashion and you enjoy paying attention to your clothes. You may then see yourself as fashionable and stylish. But do others? Might some of your classmates think you trendy, superficial, or fiscally irresponsible? The qualities that others may ascribe to you based on your fashion sense may in turn affect how you see yourself. This is yet another way that identity is shaped through communication in a social context.

In Part I of this book you were introduced to the idea that language shapes reality; the vocabulary we use to discuss an idea or person influences how we think about our subject. Likewise, if we have no words for a phenomenon then we are discouraged from talking about it or bringing it into our reality. Edward Sapir and Benjamin Whorf believed that the structure of language was a necessary component for producing thought. You have probably heard that Eskimos have numerous words for snow. How many do you have? Snow. Ice. If you ski or snowboard then you probably have a few more. Powder. Moguls. Depending on the extent of your snow vocabulary you can look at the frozen water and perceive it in numerous ways. But if your vocabulary is limited then so is the way you can think and talk about snow. If you have studied languages such as Spanish or French then you are familiar with the concepts of a formal and informal “you.” Depending on the relationship between you and your audience you will use a different word for “you” and consequently conjugate your verbs accordingly. If you are talking with a child, for example, you would use the informal version, but if you were speaking with someone of higher social status such as your Professor you would use the formal “you.” As you speak and write, this language structure demands that you be consciously aware of social relations. This awareness then becomes part of your social reality.

If you have ever been on the receiving end of a stereotype or derogatory label in reference to your culture, religion, race, gender, sexual orientation, or other aspect of your identity, then you are acutely aware of the power of language. You know that such language is not a neutral conveyor of ideas, but is designed to alter and shape the way the audience thinks about a particular person or group. Think about the list of terms that historically have been used to refer to persons of African descent—African, Colored, Negro, Black, Afro-American, African American, and the harshest, the N-word. When you read each term, what are the different images or connotations connected with them? Do they bring up different historical periods, varying degrees of sociopolitical power, a variety of relationships to the dominant group? The range of emotions and images that each of these terms produces is further testament to the subjectivity of language as well as its temporal nature.

A more recent linguistic strategy among historically oppressed groups is called reclaiming. When a group reclaims a word they are attempting to take it back from the dominant group. If the dominant group has used a word or phrase as an insult then the oppressed group reclaims it for their own, positive meaning. Can you think of some examples? How about “bitch,” “queer,” “nigga,” or “cunt”? Hopefully, you are thinking, “hey, those words may still be insulting to some people; they’re not necessarily positive.” True. Part of the process in reclaiming is that only certain people can use them in a reclaimed fashion, most simply, the members of the oppressed groups at which the term was designed to hurt. If a woman is walking down the street and a man yells out, “Hey Bitch, watch where you’re going!” that is not reclaiming as the term is used as an insult. However, the magazine, BITCH: A Feminist Response to Popular Culture, is reclaiming this term. Here is a YouTube Video where the Bitch Media’s co-founder Andi Zeisler talk about the the word.

Also, visit the website www.bitchmedia.org to learn more. Can all words be reclaimed? Here is one perspective about the word “slut” from Feministing, “an online community run by and for young feminists” (www.feministing.com). A Few Words About Reclaiming ‘Slut’