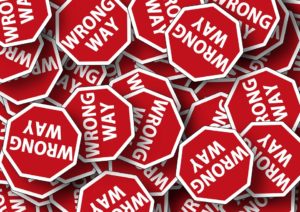 Fallacies are mistakes in reasoning. We learn about them so we can identify when someone else uses them, but most importantly so we can avoid them and present better arguments.

In the appeal to force, someone in a position of power threatens to bring down unfortunate consequences upon anyone who dares to disagree with a proffered proposition. Although it is rarely developed so explicitly, a fallacy of this type might propose:

It should be clear that even if all of the premises were true, the conclusion could nevertheless be false. Since that is possible, arguments of this form are plainly invalid. While this might be an effective way to get you to agree (or at least to pretend to agree) with my position, it offers no grounds for believing it to be true.

Turning this on its head, an appeal to pity tries to win acceptance by pointing out the unfortunate consequences that will otherwise fall upon the speaker and others, for whom we would then feel sorry.

Again, the conclusion may be false (that is, perhaps I should be given the ticket) even if the premises are all true, so the argument is fallacious.Appeal to Emotion (argumentum ad populum)

In a more general fashion, the appeal to emotion relies upon emotively charged language to arouse strong feelings that may lead an audience to accept its conclusion:

The problem here is that although the flowery language of the premise might arouse strong feelings in many members of its intended audience, the widespread occurrence of those feelings has nothing to do with the truth of the conclusion.
Appeal to Authority (argumentum ad verecundiam)

Each of the next three fallacies involve the mistaken supposition that there is some connection between the truth of a proposition and some feature of the person who asserts or denies it. In an appeal to authority, the opinion of someone famous or accomplished in another area of expertise is supposed to guarantee the truth of a conclusion. Thus, for example:

As a pattern of reasoning, this is clearly mistaken: no proposition must be true because some individual (however talented or successful) happens to believe it. Even in areas where they have some special knowledge or skill, expert authorities could be mistaken; we may accept their testimony as inductive evidence but never as deductive proof of the truth of a conclusion. Personality is irrelevant to truth.

The mirror-image of the appeal to authority is the ad hominem argument, in which we are encouraged to reject a proposition because it is the stated opinion of someone regarded as disreputable in some way. This can happen in several different ways, but all involve the claim that the proposition must be false because of who believes it to be true:

In any of its varieties, the ad hominem fallacy asks us to adopt a position on the truth of a conclusion for no better reason than that someone believes its opposite. But the proposition that person believes can be true (and the intended conclusion false) even if the person is unsavory or has a stake in the issue or holds inconsistent beliefs or shares a common flaw with us. Again, personality is irrelevant to truth.

An appeal to ignorance proposes that we accept the truth of a proposition unless an opponent can prove otherwise. Thus, for example:

But, of course, the absence of evidence against a proposition is not enough to secure its truth. What we don’t know could nevertheless be so.
Irrelevant Conclusion (ignoratio elenchi)

Finally, the fallacy of the irrelevant conclusion tries to establish the truth of a proposition by offering an argument that actually provides support for an entirely different conclusion.

Here the premises might support some conclusion about working parents generally, but do not secure the truth of a conclusion focussed on women alone and not on men. Although clearly fallacious, this procedure may succeed in distracting its audience from the point that is really at issue.