One of the biggest challenges with integrating ethics is overcoming “simplistic subjectivism,” or the belief that “ethics is simply a matter of personal opinion, that there is nothing anyone can say or do to change a person’s mind about ethical issues,” and that there is something wrong with trying to change people’s minds—because people should have the right to their own opinion (Matchett, 2009, p.1). This process of rationalization embraces the grey areas found ethics, and can be used as an excuse to avoid, and in some cases, justify, judgments, decision-making, and ultimately action. Let’s consider for a moment, the rising problem of academic dishonesty in higher education.

A recent study from Rutgers University showed that 62% of all university students admitted to cheating during the course of their matriculation. Statistics like this are not the exception anymore, but rather are quickly becoming the norm. In general, students do not enter the University with the intent of cheating throughout one’s academic career. When it does happen, some common, almost cyclical, rationalizations faculty will hear include: 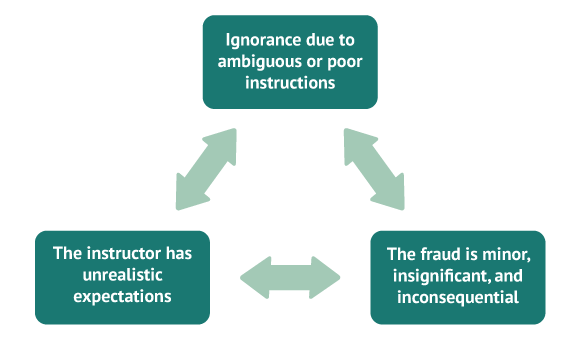 Academic integrity is an issue in both face-to-face and online learning environments. We do know there are strategies to combat rationalizations used as an excuse, particularly by reducing ambiguity and grey areas as much as possible including:

• Developing some type of personal relationship with students (even on small scales). Research has shown that it does impact students’ decisions to act ethically.

• Emphasizing that all methods of cheating are subject to review, and this should combat the notion of any student having advantage over another.

• Recognizing that it is impossible to eliminate all methods of cheating. The best way to avoid academic dishonesty is to create strong disincentives to cheat, and to create an environment (or course content) where students will find it more difficult to rationalize cheating.

This is not to say that the onus of responsibility to prevent academic dishonesty is only on the faculty member, but it doesn’t hurt to be more proactive and take steps beyond a policy on a syllabus.

The news has been filled in recent years with stories about unethical writers, people who have been caught using other writers’ words and ideas without citing the source. In the academic world, such borrowing is a serious breach of ethics, with serious consequences. One university president, who borrowed too freely in a convocation speech without mentioning his source, was forced to resign his position. Recently, some history professors’ books were found to contain long passages taken verbatim from sources, the result—they claimed—of careless note taking. Whether deliberate or accidental, such mistakes can destroy a person’s career.

With the advent of the internet and the easy availability of materials and content, students can quickly rationalize academic dishonesty, such as plagiarism, by using reasoning such as “They had the same idea as me—and they said it better!” Students may also plagiarize less deliberately, not realizing that material that is so easy to copy and paste from the Web must be treated as a quotation and cited as a source. Students need to know the consequences of plagiarizing are severe, ranging from failure on the writing project to failure in the course and even to suspension or expulsion from the university. Many universities will also indicate on a student’s transcript if there has been an honor violation, something potential employers will see.

Can you think of famous examples of plagiarism?