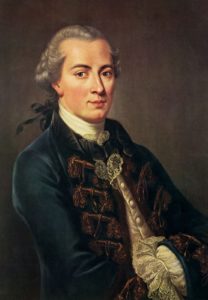 Kantian ethics refers to a deontological ethical theory ascribed to the German philosopher Immanuel Kant. The theory, developed as a result of Enlightenment rationalism, is based on the view that the only intrinsically good thing is a good will; an action can only be good if its maxim – the principle behind it – is duty to the moral law. Central to Kant’s construction of the moral law is the categorical imperative, which acts on all people, regardless of their interests or desires. Kant formulated the categorical imperative in various ways. His principle of universalisability requires that, for an action to be permissible, it must be possible to apply it to all people without a contradiction occurring. His formulation of humanity as an end in itself requires that humans are never treated merely as a means to an end, but always also as ends in themselves. The formulation of autonomy concludes that rational agents are bound to the moral law by their own will, while Kant’s concept of the Kingdom of Ends requires that people act as if the principles of their actions establish a law for a hypothetical kingdom. Kant also distinguished between perfect and imperfect duties. A perfect duty, such as the duty not to lie, always holds true; an imperfect duty, such as the duty to give to charity, can be made flexible and applied in particular time and place.

American philosopher Louis Pojman has cited Pietism, political philosopher Jean-Jacques Rousseau, the modern debate between rationalism and empiricism, and the influence of natural law as influences on the development of Kant’s ethics. Other philosophers have argued that Kant’s parents and his teacher, Martin Knutzen, influenced his ethics. Those influenced by Kantian ethics include philosopher Jürgen Habermas, political philosopher John Rawls, and psychoanalyst Jacques Lacan. German philosopher G. W. F. Hegel criticised Kant for not providing specific enough detail in his moral theory to affect decision-making and for denying human nature. German philosopher Arthur Schopenhauer argued that ethics should attempt to describe how people behave and criticised Kant for being prescriptive. Michael Stocker has argued that acting out of duty can diminish other moral motivations such as friendship, while Marcia Baron has defended the theory by arguing that duty does not diminish other motivations. The Catholic Church has criticised Kant’s ethics as contradictory and regards Christian ethics as more compatible with virtue ethics.

The claim that all humans are due dignity and respect as autonomous agents means that medical professionals should be happy for their treatments to be performed upon anyone, and that patients must never be treated merely as useful for society. Kant’s approach to sexual ethics emerged from his view that humans should never be used merely as a means to an end, leading him to regard sexual activity as degrading and to condemn certain specific sexual practices. Feminist philosophers have used Kantian ethics to condemn practices such as prostitution and pornography because they do not treat women as ends. Kant also believed that, because animals do not possess rationality, we cannot have duties to them except indirect duties not to develop immoral dispositions through cruelty towards them. Kant used the example of lying as an application of his ethics: because there is a perfect duty to tell the truth, we must never lie, even if it seems that lying would bring about better consequences than telling the truth.