Making good ethical decisions requires practice in exploring the ethical aspects of a decision and weighing the considerations that will impact our choice of action. Unfortunately, the manner in which ethical issues are presented to the general public, for example, through the mass media is not always helpful. In five minute sections of the nightly news and in a variety of talk shows, “experts” exchange scripted ideas on complicated subjects such as abortion, living wage legislation, gay rights, physician assisted suicide, environmental issues, immigration, etc. There is generally little depth, and no indication that these discussions will lead to ongoing efforts to resolve them. Given that media content is also a persuasive type of communication, it can play an important role in promoting both positive and negative social values, thereby potentially influencing ethical decision-making.

Media has become a powerful tool of communication, and is pervasive in our lives though outlets such as broadcast media, film, theater, the arts, and of course, television, print and web. Whether or not media content is contributing positively to our value systems is debatable. What is not debatable is that that university students will consume up to 7 ½ -10 hours per day of media content, so the need for students to have more skill in disseminating it becomes imperative.

The following activity asks students to take the iconography of Barbie, and create a new message that challenges the stereotypes ascribed to gender.

Perhaps no media artifact represents American perceptions of beauty more than the plastic toy doll, Barbie. Barbie is an American cultural icon that is an idealized model of what many young girls (and, yes, some boys) aspire to look like and/or expect in life. These standards are of course not limited to just being thin and beautiful, but also to a particular race, class, and definition of femininity as well. Barbie is not the sole determinant or influence, of course, to how we decide to treat one another, but in order to affect decision-making, in this case about gender, we can show students how they have the power to alter messaging.

The assignment calls for: 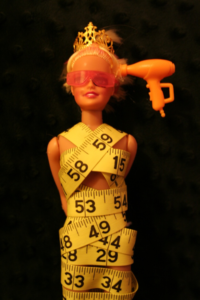