Accessory structures of the skin include hair, nails, sweat glands, and sebaceous glands. These structures embryologically originate from the epidermis and can extend down through the dermis into the hypodermis.

Hair is a keratinous filament growing out of the epidermis. It is primarily made of dead, keratinized cells. Strands of hair originate in an epidermal penetration of the dermis called the hair follicle. The hair shaft is the part of the hair not anchored to the follicle, and much of this is exposed at the skin’s surface. The rest of the hair, which is anchored in the follicle, lies below the surface of the skin and is referred to as the hair root. The hair root ends deep in the dermis at the hair bulb, and includes a layer of mitotically active basal cells called the hair matrix. The hair bulb surrounds the hair papilla, which is made of connective tissue and contains blood capillaries and nerve endings from the dermis (Figure 4.11). 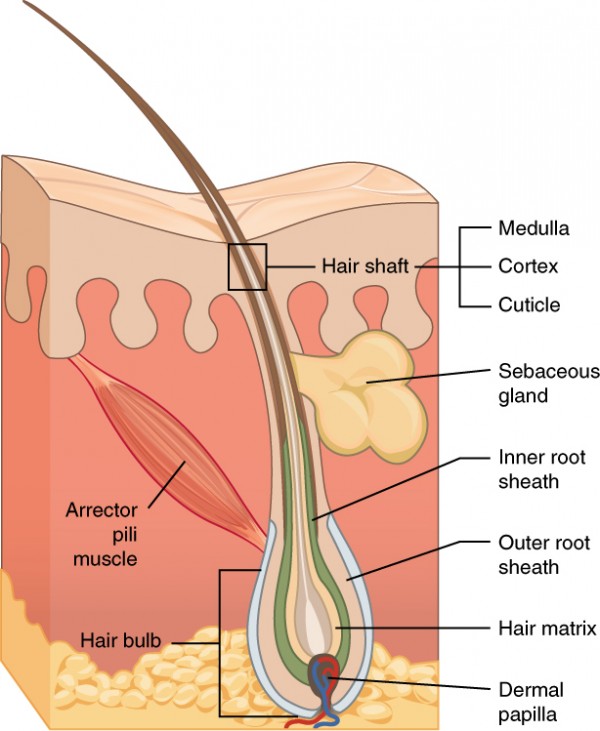 Figure 4.11. Hair
Hair follicles originate in the epidermis and have many different parts.

Just as the basal layer of the epidermis forms the layers of epidermis that get pushed to the surface as the dead skin on the surface sheds, the basal cells of the hair bulb divide and push cells outward in the hair root and shaft as the hair grows. The medulla forms the central core of the hair, which is surrounded by the cortex, a layer of compressed, keratinized cells that is covered by an outer layer of very hard, keratinized cells known as the cuticle. These layers are depicted in a longitudinal cross-section of the hair follicle (Figure 4.12), although not all hair has a medullary layer. Hair texture (straight, curly) is determined by the shape and structure of the cortex, and to the extent that it is present, the medulla. The shape and structure of these layers are, in turn, determined by the shape of the hair follicle. Hair growth begins with the production of keratinocytes by the basal cells of the hair bulb. As new cells are deposited at the hair bulb, the hair shaft is pushed through the follicle toward the surface. Keratinization is completed as the cells are pushed to the skin surface to form the shaft of hair that is externally visible. The external hair is completely dead and composed entirely of keratin. For this reason, our hair does not have sensation. Furthermore, you can cut your hair or shave without damaging the hair structure because the cut is superficial. Most chemical hair removers also act superficially; however, electrolysis and yanking both attempt to destroy the hair bulb so hair cannot grow. 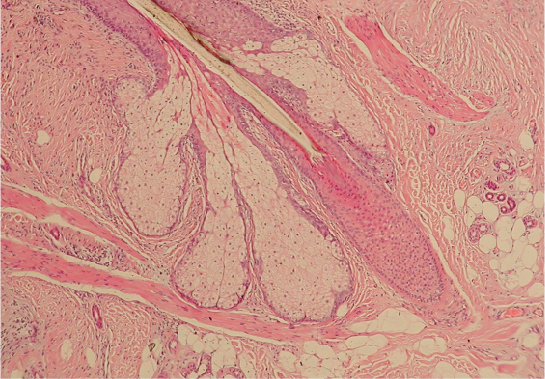 The wall of the hair follicle is made of three concentric layers of cells. The cells of the internal root sheath surround the root of the growing hair and extend just up to the hair shaft. They are derived from the basal cells of the hair matrix. The external root sheath, which is an extension of the epidermis, encloses the hair root. It is made of basal cells at the base of the hair root and tends to be more keratinous in the upper regions. The glassy membrane is a thick, clear connective tissue sheath covering the hair root, connecting it to the tissue of the dermis.

Hair serves a variety of functions, including protection, sensory input, thermoregulation, and communication. For example, hair on the head protects the skull from the sun. The hair in the nose and ears, and around the eyes (eyelashes) defends the body by trapping and excluding dust particles that may contain allergens and microbes. Hair of the eyebrows prevents sweat and other particles from dripping into and bothering the eyes. Hair also has a sensory function due to sensory innervation by a hair root plexus surrounding the base of each hair follicle. Hair is extremely sensitive to air movement or other disturbances in the environment, much more so than the skin surface. This feature is also useful for the detection of the presence of insects or other potentially damaging substances on the skin surface. Each hair root is connected to a smooth muscle called the arrector pili that contracts in response to nerve signals from the sympathetic nervous system, making the external hair shaft “stand up.” The primary purpose for this is to trap a layer of air to add insulation. This is visible in humans as goose bumps and even more obvious in animals, such as when a frightened cat raises its fur. Of course, this is much more obvious in organisms with a heavier coat than most humans, such as dogs and cats.

Hair grows and is eventually shed and replaced by new hair. This occurs in three phases. The first is the anagen phase, during which cells divide rapidly at the root of the hair, pushing the hair shaft up and out. The length of this phase is measured in years, typically from 2 to 7 years. The catagen phase lasts only 2 to 3 weeks, and marks a transition from the hair follicle’s active growth. Finally, during the telogen phase, the hair follicle is at rest and no new growth occurs. At the end of this phase, which lasts about 2 to 4 months, another anagen phase begins. The basal cells in the hair matrix then produce a new hair follicle, which pushes the old hair out as the growth cycle repeats itself. Hair typically grows at the rate of 0.3 mm per day during the anagen phase. On average, 50 hairs are lost and replaced per day. Hair loss occurs if there is more hair shed than what is replaced and can happen due to hormonal or dietary changes. Hair loss can also result from the aging process, or the influence of hormones.

Similar to the skin, hair gets its color from the pigment melanin, produced by melanocytes in the hair papilla. Different hair color results from differences in the type of melanin, which is genetically determined. As a person ages, the melanin production decreases, and hair tends to lose its color and becomes gray and/or white.

The nail bed is a specialized structure of the epidermis that is found at the tips of our fingers and toes. The nail body is formed on the nail bed, and protects the tips of our fingers and toes as they are the farthest extremities and the parts of the body that experience the maximum mechanical stress (Figure 4.13). In addition, the nail body forms a back-support for picking up small objects with the fingers. The nail body is composed of densely packed dead keratinocytes. The epidermis in this part of the body has evolved a specialized structure upon which nails can form. The nail body forms at the nail root, which has a matrix of proliferating cells from the stratum basale that enables the nail to grow continuously. The lateral nail fold overlaps the nail on the sides, helping to anchor the nail body. The nail fold that meets the proximal end of the nail body forms the nail cuticle, also called the eponychium. The nail bed is rich in blood vessels, making it appear pink, except at the base, where a thick layer of epithelium over the nail matrix forms a crescent-shaped region called the lunula (the “little moon”). The area beneath the free edge of the nail, furthest from the cuticle, is called the hyponychium. It consists of a thickened layer of stratum corneum.

Figure 4.13. Nails
The nail is an accessory structure of the integumentary system.

When the body becomes warm, sudoriferous glands produce sweat to cool the body. Sweat glands develop from epidermal projections into the dermis and are classified as merocrine glands; that is, the secretions are excreted by exocytosis through a duct without affecting the cells of the gland. There are two types of sweat glands, each secreting slightly different products.

An eccrine sweat gland is type of gland that produces a hypotonic sweat for thermoregulation. These glands are found all over the skin’s surface, but are especially abundant on the palms of the hand, the soles of the feet, and the forehead (Figure 4.14). They are coiled glands lying deep in the dermis, with the duct rising up to a pore on the skin surface, where the sweat is released. This type of sweat, released by exocytosis, is hypotonic and composed mostly of water, with some salt, antibodies, traces of metabolic waste, and dermicidin, an antimicrobial peptide. Eccrine glands are a primary component of thermoregulation in humans and thus help to maintain homeostasis. 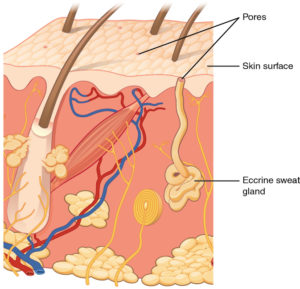 Figure 4.14. Eccrine Gland
Eccrine glands are coiled glands in the dermis that release sweat that is mostly water.

An apocrine sweat gland is usually associated with hair follicles in densely hairy areas, such as armpits and genital regions. Apocrine sweat glands are larger than eccrine sweat glands and lie deeper in the dermis, sometimes even reaching the hypodermis, with the duct normally emptying into the hair follicle. In addition to water and salts, apocrine sweat includes organic compounds that make the sweat thicker and subject to bacterial decomposition and subsequent smell. The release of this sweat is under both nervous and hormonal control, and plays a role in the poorly understood human pheromone response. Most commercial antiperspirants use an aluminum-based compound as their primary active ingredient to stop sweat. When the antiperspirant enters the sweat gland duct, the aluminum-based compounds precipitate due to a change in pH and form a physical block in the duct, which prevents sweat from coming out of the pore.

A sebaceous gland is a type of oil gland that is found all over the body and helps to lubricate and waterproof the skin and hair. Most sebaceous glands are associated with hair follicles. They generate and excrete sebum, a mixture of lipids, onto the skin surface, thereby naturally lubricating the dry and dead layer of keratinized cells of the stratum corneum, keeping it pliable. The fatty acids of sebum also have antibacterial properties, and prevent water loss from the skin in low-humidity environments. The secretion of sebum is stimulated by hormones, many of which do not become active until puberty. Thus, sebaceous glands are relatively inactive during childhood.