Hearing, or audition, is the transduction of sound waves into a neural signal that is made possible by the structures of the ear (Figure 8.5). The large, fleshy structure on the lateral aspect of the head is known as the auricle. Some sources will also refer to this structure as the pinna, though that term is more appropriate for a structure that can be moved, such as the external ear of a cat. The C-shaped curves of the auricle direct sound waves toward the auditory canal. The canal enters the skull through the external auditory meatus of the temporal bone. At the end of the auditory canal is the tympanic membrane, or ear drum, which vibrates after it is struck by sound waves. The auricle, ear canal, and tympanic membrane are often referred to as the external ear. The middle ear consists of a space spanned by three small bones called the ossicles. The three ossicles are the malleus, incus, and stapes, which are Latin names that roughly translate to hammer, anvil, and stirrup. The malleus is attached to the tympanic membrane and articulates with the incus. The incus, in turn, articulates with the stapes. The stapes is then attached to the inner ear, where the sound waves will be transduced into a neural signal. The middle ear is connected to the pharynx through the Eustachian tube, which helps equilibrate air pressure across the tympanic membrane. The tube is normally closed but will pop open when the muscles of the pharynx contract during swallowing or yawning. 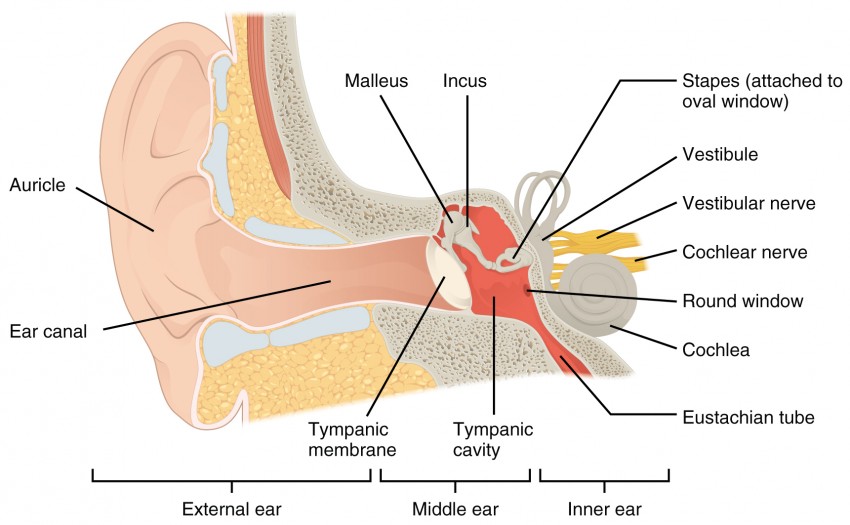 Figure 8.5. Structures of the Ear
The external ear contains the auricle, ear canal, and tympanic membrane. The middle ear contains the ossicles and is connected to the pharynx by the Eustachian tube. The inner ear contains the cochlea and vestibule, which are responsible for audition and equilibrium, respectively.

The inner ear is often described as a bony labyrinth, as it is composed of a series of canals embedded within the temporal bone. It has two separate regions, the cochlea and the vestibule, which are responsible for hearing and balance, respectively. The neural signals from these two regions are relayed to the brain stem through separate fiber bundles. However, these two distinct bundles travel together from the inner ear to the brain stem as the vestibulocochlear nerve. Sound is transduced into neural signals within the cochlear region of the inner ear, which contains the sensory neurons of the spiral ganglia. These ganglia are located within the spiral-shaped cochlea of the inner ear. The cochlea is attached to the stapes through the oval window. The oval window is located at the beginning of a fluid-filled tube within the cochlea called the scala vestibuli. The scala vestibuli extends from the oval window, travelling above the cochlear duct, which is the central cavity of the cochlea that contains the sound-transducing neurons. At the uppermost tip of the cochlea, the scala vestibuli curves over the top of the cochlear duct. The fluid-filled tube, now called the scala tympani, returns to the base of the cochlea, this time travelling under the cochlear duct. The scala tympani ends at the round window, which is covered by a membrane that contains the fluid within the scala. As vibrations of the ossicles travel through the oval window, the fluid of the scala vestibuli and scala tympani moves in a wave-like motion. The frequency of the fluid waves match the frequencies of the sound waves (Figure 8.6). The membrane covering the round window will bulge out or pucker in with the movement of the fluid within the scala tympani. 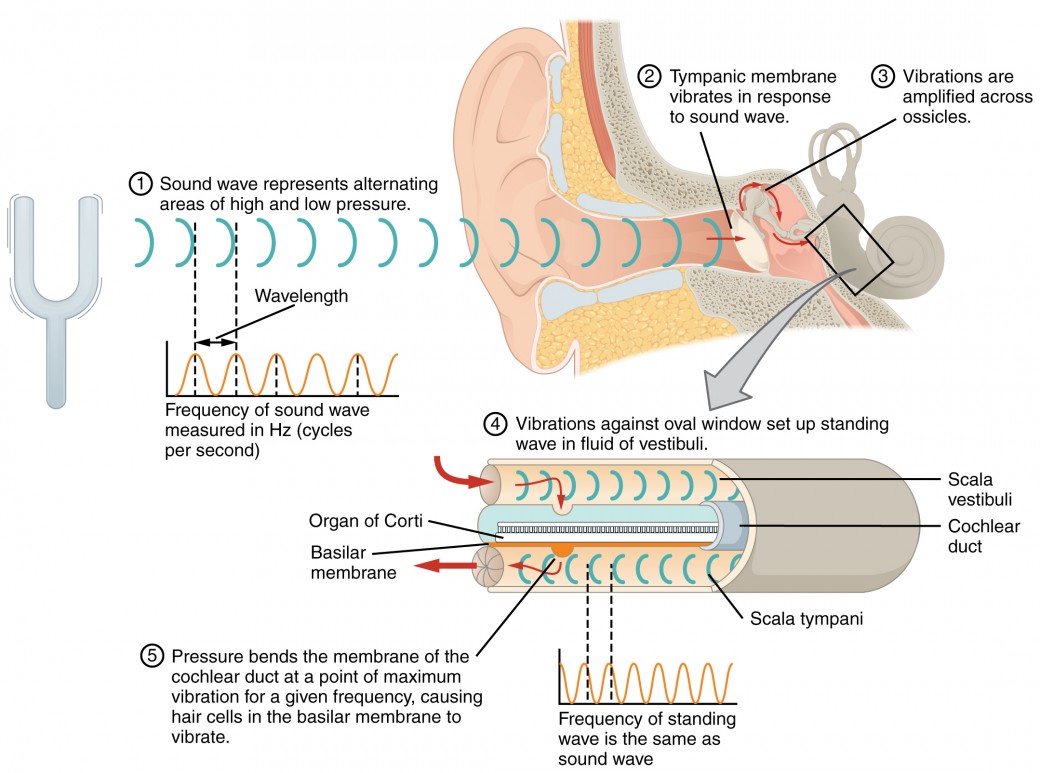 Figure 8.6. Transmission of Sound Waves to Cochlea
A sound wave causes the tympanic membrane to vibrate. This vibration is amplified as it moves across the malleus, incus, and stapes. The amplified vibration is picked up by the oval window causing pressure waves in the fluid of the scala vestibuli and scala tympani. The complexity of the pressure waves is determined by the changes in amplitude and frequency of the sound waves entering the ear.

Figure 8.7. Cross Section of the Cochlea
The three major spaces within the cochlea are highlighted. The scala tympani and scala vestibuli lie on either side of the cochlear duct. The organ of Corti, containing the mechanoreceptor hair cells, is adjacent to the scala tympani, where it sits atop the basilar membrane. 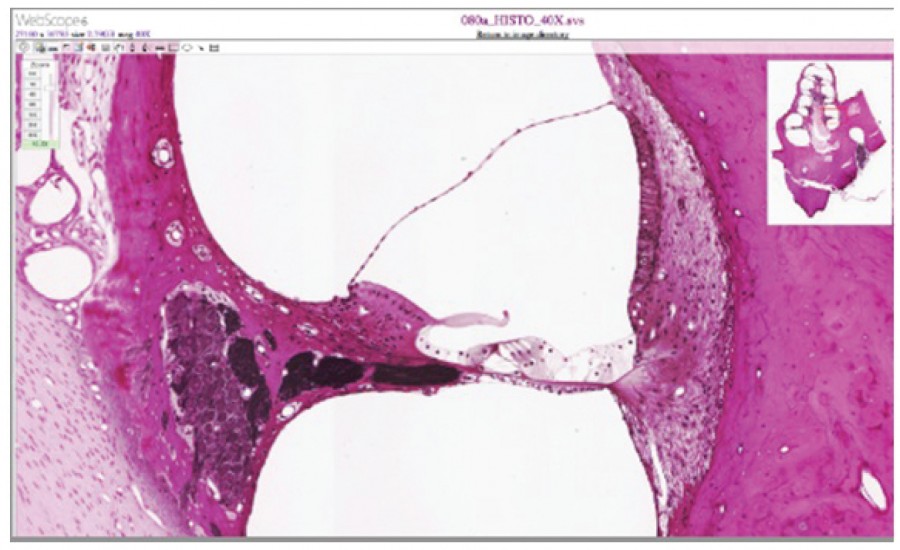 Figure 8.9. Cochlea and Organ of Corti
LM × 412. (Micrograph provided by the Regents of University of Michigan Medical School © 2012)

As stated above, a given region of the basilar membrane will only move if the incoming sound is at a specific frequency. Because the tectorial membrane only moves where the basilar membrane moves, the hair cells in this region will also only respond to sounds of this specific frequency. Therefore, as the frequency of a sound changes, different hair cells are activated all along the basilar membrane. The cochlea encodes auditory stimuli for frequencies between 20 and 20,000 Hz, which is the range of sound that human ears can detect. The unit of Hertz measures the frequency of sound waves in terms of cycles produced per second. Frequencies as low as 20 Hz are detected by hair cells at the apex, or tip, of the cochlea. Frequencies in the higher ranges of 20 KHz are encoded by hair cells at the base of the cochlea, close to the round and oval windows (Figure 8.10). Most auditory stimuli contain a mixture of sounds at a variety of frequencies and intensities (represented by the amplitude of the sound wave). The hair cells along the length of the cochlear duct, which are each sensitive to a particular frequency, allow the cochlea to separate auditory stimuli by frequency, just as a prism separates visible light into its component colors. 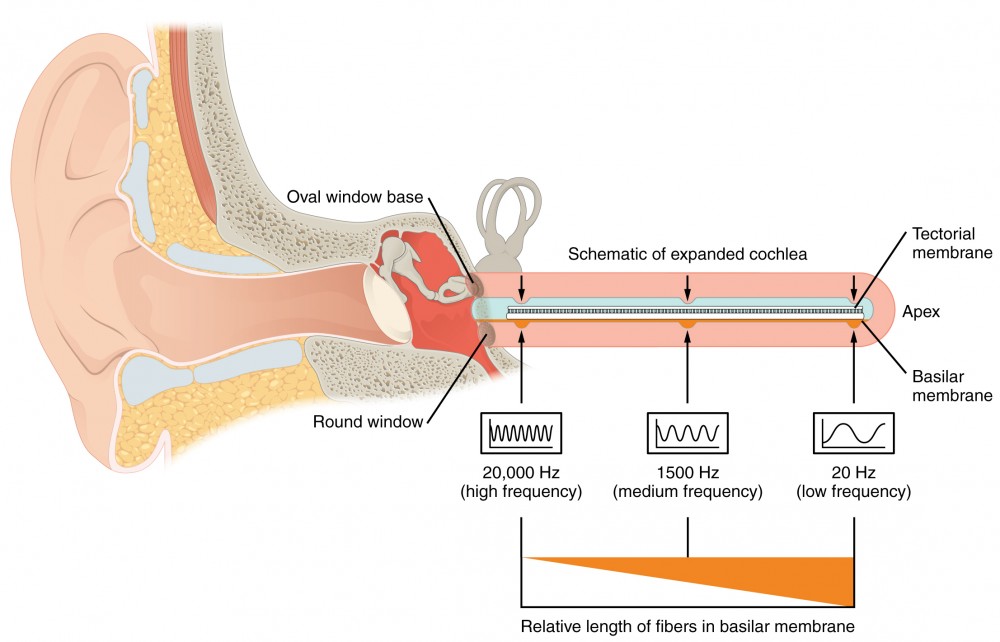 Along with audition, the inner ear is responsible for encoding information about equilibrium, the sense of balance. A similar mechanoreceptor—a hair cell with stereocilia—senses head position, head movement, and whether our bodies are in motion. These cells are located within the vestibule of the inner ear. Head position is sensed by the utricle and saccule, whereas head movement is sensed by the semicircular canals. The neural signals generated in thevestibular ganglion are transmitted through the vestibulocochlear nerve to the brain stem and cerebellum. The utricle and saccule are both largely composed of macula tissue (plural = maculae). The macula is composed of hair cells surrounded by support cells. The stereocilia of the hair cells extend into a viscous gel called the otolith (Figure 8.11). The otolith contains calcium carbonate crystals, making it denser and giving it greater inertia than the macula. Therefore, gravity will cause the otolith to move separately from the macula in response to head movements. Tilting the head causes the otolith to slide over the macula in the direction of gravity. The moving otolith layer, in turn, bends the sterocilia to cause some hair cells to depolarize as others hyperpolarize. The exact tilt of the head is interpreted by the brain on the basis of the pattern of hair-cell depolarization. 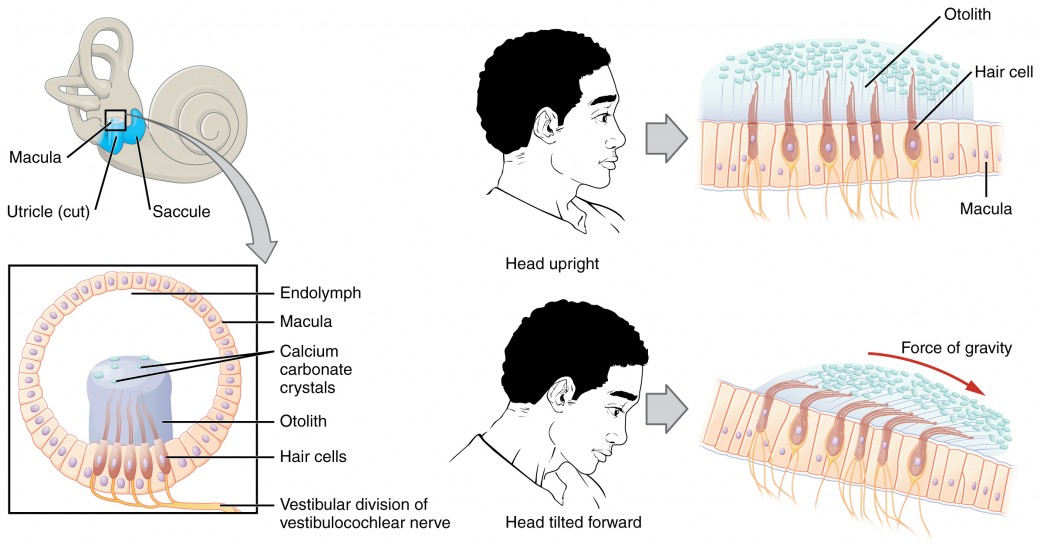 Figure 8.11. Linear Acceleration Coding by Maculae
The maculae are specialized for sensing linear acceleration, such as when gravity acts on the tilting head, or if the head starts moving in a straight line. The difference in inertia between the hair cell stereocilia and the otolith in which they are embedded leads to a shearing force that causes the stereocilia to bend in the direction of that linear acceleration.

The semicircular canals are three ring-like extensions of the vestibule. One is oriented in the horizontal plane, whereas the other two are oriented in the vertical plane. The anterior and posterior vertical canals are oriented at approximately 45 degrees relative to the sagittal plane (Figure 8.12). The base of each semicircular canal, where it meets with the vestibule, connects to an enlarged region known as the ampulla. The ampulla contains the hair cells that respond to rotational movement, such as turning the head while saying “no.” The stereocilia of these hair cells extend into the cupula, a membrane that attaches to the top of the ampulla. As the head rotates in a plane parallel to the semicircular canal, the fluid lags, deflecting the cupula in the direction opposite to the head movement. The semicircular canals contain several ampullae, with some oriented horizontally and others oriented vertically. By comparing the relative movements of both the horizontal and vertical ampullae, the vestibular system can detect the direction of most head movements within three-dimensional (3-D) space.

Figure 8.12. Rotational Coding by Semicircular Canals
Rotational movement of the head is encoded by the hair cells in the base of the semicircular canals. As one of the canals moves in an arc with the head, the internal fluid moves in the opposite direction, causing the cupula and stereocilia to bend. The movement of two canals within a plane results in information about the direction in which the head is moving, and activation of all six canals can give a very precise indication of head movement in three dimensions.

Age Related Changes to the Ear

While the external appearance of the ear does change as a part of aging, this does not affect hearing.  The gradual loss of hearing that often begins by the age of 40 is due mostly to changes that occur in inner-ear structures.  The vestibulocochlear nerve, which innervates the structures of the inner ear, is composed of two divisions- the cochlear division, which is associated with hearing, and the vestibular division, which is associated with balance and equilibrium.

Age Related Dysfunctions of the Ear

Presbycusis, indicating the loss of hearing that occurs normally with aging, is most often noticeable by the age of the age of 50.  Typically high-pitched sounds are the first to be lost, followed by lower pitched sounds.  As the majority of human speech is in the lower range of sounds initial hearing loss doesn’t typically interfere with communication.  It is thought that presbycusis is causes by long term exposure to environmental noise.  People who have lived their life in relatively quiet environments are less likely to sure from this form of hearing loss.

Tinnitus, also known as ringing of the ears, affects 10% of people over the age of 65.  While the cause of the ringing is unknown, the noise is generated somewhere within the auditory system.

Deafness, or complete hearing loss, is not a common condition of aging, but it does become more prevalent with aging. There are two types of deafness, conductive deafness and nerve deafness.

Conductive deafness occurs when the transmission of sound waves through the external or middle ear is hindered or blocked.  The interference might be causes by a physical blockage of the external auditory meatus by earwax or a foreign object, inflammation of the tympanic membrane, calcification of the joints between the ossicles, or thickening of the oval window.  All of these diminish the vibration reaching the inner-ear structures.

By contrast, nerve deafness is the result of disorders that affect the receptor cells of the spiral organ, the neurons of the vestibulocochlear nerve, or nerve pathways within the central nervous system.  Ordinary hearing aids with not help correct nerve deafness, but improvement is possible by means of a cochlear implant.

Dizziness is often described as a disturbed sense of relationship to space or sensation of unsteadiness with a feeling of movement with the head.  Vertigo is an illusion of movement, as if the external world was revolving around the person or as if the person was revolving in space.  While the two terms are used interchangeably there are distinct difference between them.  Older people have a greater tendency to be troubled with dizziness and vertigo.  These conditions are often a result of inflammation of the parts of the inner ear associated with balance and equilibrium or of the nerve fibers of the vestibulocochlear nerve.