Each cell process is carried out in a specific location in the cell, often located in or around an organelle. Think of an organelle as a level of organization between macromolecules and the cell. Organelles carry out specialized tasks within the cell, localizing functions such as replication, energy production, protein synthesis, and processing of food and waste. The various cells differ in the arrangement and number of organelles, as well as structurally, giving rise to the hundreds of cell types found in the body.

The focus of this section is to understand the organelles of the cell, how they interact with each other, and how they function during transport, growth and division in the cell. You will learn about the controlled chemical environment a cell maintains and what restrictions this places on the types of chemical reactions it can perform. This background is vital to understanding key processes such as how a cell releases energy from glucose, makes and folds proteins, and goes through growth and cell division.

Think of a city and the various jobs within a city. A cell is similar with each organelle serving a specific purpose. There are organelles whose job is to provide shape and structure to the cell, much like the city streets and bridges. These protein rich organelles include intermediate filaments, microtubules, and microfilaments. Some of these actually move other organelles around the cell or change the shape of the cell. When a muscle cell contracts or shortens it does so by the microfilaments made up of the proteins actin and myosin. One special organelle composed of microtubules is located in an area near the nucleus, the centrosome. The centrosome contains a pair called of microtubule bundles known as the centrioles. Centrioles are important because they move chromosomes to opposite ends of the cell during cell replication termed mitosis. Neurons do not have centrioles and cannot replicate. 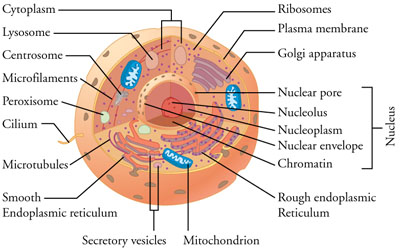 Other organelles help synthesize the proteins needed by the cell. These protein factories are called ribosomes. They can be scattered within the cell or attached to a membrane channel system called the endoplasmic reticulum or ER. When the ER has ribosomes attached to it, it is termed the rough ER (the ribosomes give it a rough or grainy appearance). When the ER lacks ribosomes it is termed the smooth ER and functions for lipid synthesis and storage of toxins. When a protein is manufactured it must be folded into a specific shape to work. Often additional side chains of carbohydrates must be attached. The protein is processed in the rough ER. Once it is formed it enters the golgi apparatus which is the distributing plant for the cell. It completes any protein processing and then packages it into a vesicle for transport to its destination. Some proteins are needed in the cell membrane and the vesicles make sure they reach the membrane. The golgi apparatus also makes a special type of vesicle termed a lysosome. The lysosome is the garbage man of the cell. It takes in cell debris and waste and destroys it. The lysosome contains very powerful hydrolytic enzymes to accomplish this. It is very important that the enzymes remain in the lysosome or they would destroy the cell.

The power plant of the cell is the mitochondria. This organelle generates the ATP or energy for the cell. Mitochondria even have their own DNA termed mitochondrial DNA (mDNA) and can replicate.

Finally there is the controller of the cell. This is the nucleus. Not all cells have a nucleus and are termed anucleate. If you look at the image of the red blood cells you will see a white dot in the center of the cell – that is where the nucleus used to be. The nucleus is ejected when they mature. Some cells have more than one nucleus and are termed multinucleate. Skeletal muscle cells are very large cells and are multinucleate. The nucleus contains the DNA of the cell and the nucleolus. The nucleolus is an organelle that makes ribosomes. The DNA is your genetic code. It contains the genes that contain the instructions for making every protein in your body. The nucleus is surrounded by it’s own membrane with tiny holes termed nuclear pores. The membrane is called the nuclear membrane or nuclear envelope.