The cell membrane is a dynamic structure composed of lipids, proteins, and carbohydrates. It protects the cell by preventing materials from leaking out, controls what can enter or leave through the membrane, provides a binding site for hormones and other chemicals, and serves as an identification card for the immune system to distinguish between “self” and “non-self” cells. We will first investigate the anatomy of the cell membrane and then continue on to study the physiology of membrane transport. 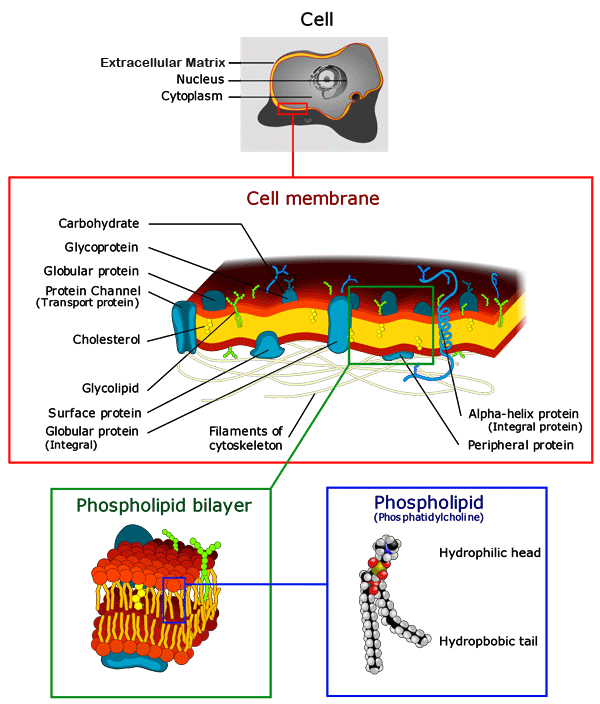 The ability of a molecule to pass through the membrane depends on its polarity and to some extent its size. Many non-polar molecules such as oxygen, carbon dioxide, and small hydrocarbons can flow easily through cell membranes. This feature of membranes is very important because hemoglobin, the protein that carries oxygen in our blood, is contained within red blood cells. Oxygen must be able to freely cross the membrane so that hemoglobin can get fully loaded with oxygen in our lungs, and deliver it effectively to our tissues. Most polar substances are stopped by a cell membrane, except perhaps for small polar compounds like the one carbon alcohol, methanol. Glucose is too large to pass through the membrane unassisted and a special transporter protein ferries it across. One type of diabetes is caused by misregulation of the glucose transporter. This decreases the ability of glucose to enter the cell and results in high blood glucose levels. Charged ions, such as sodium (Na+) or potassium (K+) ions seldom go through a membrane, consequently they also need special transporter molecules to pass through the membrane. The inability of Na+ and K+ to pass through the membrane allows the cell to regulate the concentrations of these ions on the inside or outside of the cell. The conduction of electrical signals in your neurons is based on the ability of cells to control Na+ and K+ levels.

Selectively permeable membranes allow cells to keep the chemistry of the cytoplasm different from that of the external environment. It also allows them to maintain chemically unique conditions inside their organelles.