The issues and problems discussed so far in this chapter concern elementary and secondary schools in view of their critical importance for tens of millions of children and for the nation’s social and economic well-being. However, higher education has its own issues and problems. Once again, we do not have space to discuss all these matters, but we will examine some of the most interesting and important. (Recall that Chapter 7 “Alcohol and Other Drugs” discussed alcohol abuse on campus, a very significant higher education problem.) 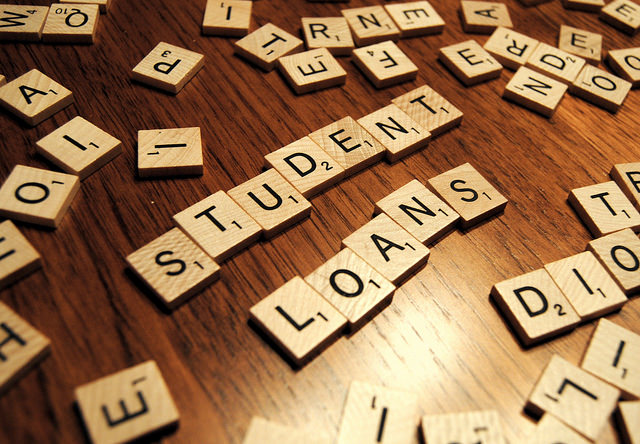 Combining these figures, students at the least expensive four-year institutions might have bills that total $17,000 to $20,000 annually, and those at the most expensive private institutions have bills that exceed $50,000. Scholarships and other financial aid reduce these costs for many students. Private institutions actually collect only about 67 percent of their published tuition and fees because of the aid they hand out, and public institutions collect only about 82 percent (Stripling, 2010). However, many students who receive aid may still have bills totaling thousands of dollars annually and graduate with huge loans to repay. At two-year public institutions, annual tuition and fees average almost $3,000; these colleges are more affordable but nonetheless can be very costly for their students and their families.

In view of all these figures, it should come as no surprise that many students graduate in debt. Of all the college students who graduated in 2010, roughly two-thirds had to take out loans to pay for their various expenses. These students graduated with an average debt of $25,250 (Pope, 2011), which can certainly take many years to pay off.

Although college is often said to be the best time of one’s life, many students have difficulties during their college years. These students are called floundering students. Homesickness during the first semester on campus is common, but a number of students have difficulties beyond homesickness. According to psychiatry professor David Leibow, who has studied troubled students, many floundering students mistakenly believe that they are the only ones who are floundering, and many fail to tell their parents or friends about their problems (Golden, 2010). The major cause of floundering, says Leibow, is academic difficulties; other causes include homesickness, relationship problems, family problems including family conflict and the serious illness or death of a family member, personal illness, and financial difficulties.

An estimated 10 percent of students annually seek psychological counseling on their college campus, primarily for depression, anxiety, and relationship problems (Epstein, 2010). About one-third of college students overall have sought counseling by the time they graduate or leave school for other reasons, and 7 percent say they have considered suicide before or after entering college (Sieben, 2011). Many students who seek counseling are given medications to treat their symptoms. Leibow says these medications are often helpful but worries that they are overprescribed. Three reasons underlie his concern. First, although the students given these medications may have problems, often the problems are a normal part of growing into adulthood and not serious enough to justify medication. Second, some of these medications can have serious side effects. Third, students who take medications may be less motivated to address the underlying reasons for their problems.

Social Class and Race in Admissions

We saw earlier in this chapter that African American, Latino, and low-income students are less likely to attend college. And when low-income students do attend college, they are much more likely to attend lower-ranking institutions than very selective campuses. At the very top colleges and universities, 74 percent of new students come from the wealthiest one-fourth of US households, and only 3 percent come from the poorest one-fourth of households (Krugman, 2012).

These facts raise important questions about the lack of diversity in college admissions and campus life. Chapter 3 “Racial and Ethnic Inequality” discussed the debate over racially based affirmative action in higher education. Reflecting this debate, some states have passed laws prohibiting the use of race and ethnicity in admissions to public colleges and universities. One such state was California, where voters approved this type of prohibition in 1996. During the first year after this ban took effect, the number of African American and Latino students admitted to the University of California system dropped by about 25 percent and by 50 percent at the system’s two most selective campuses in Berkeley and Los Angeles (UCLA). According to the head of the University of California system, “If we had affirmative action as one of our tools, we’d do somewhat better for Hispanics, and we’d probably do significantly better for African-Americans” (Pérez-Peña, 2012). 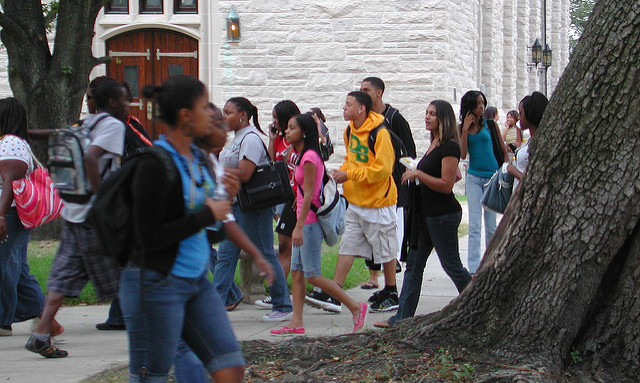 Although colleges and universities are making a greater effort to attract and retain low-income students and students of color, these students remain greatly underrepresented at institutions of higher education.

In response to this new attention to social class, colleges and universities have begun to increase their efforts to attract and retain low-income students, which a recent news report called “one of the most underrepresented minority groups at many four-year colleges” (Schmidt, 2010). The dean of admissions and financial aid at Harvard University summarized these efforts as follows: “I honestly cannot think of any admissions person I know who is not looking—as sort of a major criteria [sic] of how well their year went—at how well they did in attracting people of different economic backgrounds” (Schmidt, 2010).

At highly selective colleges and universities, the policy of legacy admissions makes it easier for certain wealthy students to gain admission. Under this policy, students who are daughters or sons (or other relatives) of graduates of the institution are given preference in admissions. Because their parents are very likely to be wealthy, a legacy admissions policy in effect amounts to what critics call “affirmative action for the rich” (Kahlenberg, 2010). According to recent research, being a child of an alumna or alumnus of one of these institutions increases one’s chances of admission by forty-five percentage points (Kahlenberg, 2011). Thus if a nonlegacy applicant with certain qualifications would ordinarily have a 40 percent chance of being admitted, a legacy applicant with the same qualifications would have an 85 percent chance of being admitted. Critics say legacy admissions give an unfair advantage to wealthy students and use up valuable spots that should go to more qualified students from more varied socioeconomic backgrounds. As one critic puts it, “It’s fundamentally unfair because it’s a preference that advantages the already advantaged. It has nothing to do with the individual merit of the applicant” (Lewin, 2010, p. A12).

The 57 percent overall rate masks a racial/ethnic difference in graduation rates: While 60 percent of white students graduate within six years, only 49 percent of Latino students and 40 percent of African American students graduate. At some institutions, the graduation rates of Latino and African American students match those of whites, thanks in large part to exceptional efforts by these institutions to help students of color. As one expert on this issue explains, “What colleges do for students of color powerfully impacts the futures of these young people and that of our nation” (Gonzalez, 2010). Another expert placed this issue into a larger context: “For both moral and economic reasons, colleges need to ensure that their institutions work better for all the students they serve” (Stephens, 2010).

Low-income students drop out at higher rates because of academic and financial difficulties and family problems. Their academic and financial difficulties are intertwined. Low-income students often have to work many hours per week during the academic year to be able to pay their bills. Because their work schedules reduce the time they have for studying, their grades may suffer. This general problem has been made worse by cutbacks in federal grants to low-income students that began during the 1980s. These cutbacks forced low-income students to rely increasingly on loans, which have to be repaid. This fact leads some to work more hours during the academic year to limit the loans they must take out, and their increased work schedule again may affect their grades.

Low-income students face additional difficulties beyond the financial (Berg, 2010). Their writing and comprehension skills upon entering college are often weaker than those of wealthier students. If they are first-generation college students (meaning that neither parent went to college), they often have problems adjusting to campus life and living amid students from much more advantaged backgrounds.

Earlier we discussed violence in the elementary and secondary schools. Violence can also happen on college and university campuses, although shootings are very rare. However, three recent examples illustrate that students and faculty are not immune from gun violence. In April 2012, a former student lined up and then shot and killed seven people and wounded three others at Oikos University in Oakland, California. In February 2010, Amy Bishop, a biology professor at the University of Alabama in Huntsville who had recently been denied tenure, allegedly shot and killed three faculty at a department meeting and wounded three others. Almost three years earlier, a student at Virginia Tech went on a shooting rampage and killed thirty-two students and faculty before killing himself.

Many colleges and universities have been accused of not taking rape and sexual assault seriously in what one news report called a “struggle for justice” for campus rape victims (Lipka, 2011; Shapiro, 2010). This criticism takes two forms. First, campuses ignore many reports of rape and sexual assault altogether. Second, they hand out weak or no discipline in cases when they do heed reports. One student’s account of her university’s lack of follow-up to her alleged rape illustrates this criticism. “It was as if they were going above and beyond to ensure nothing would be done in my case,” the woman later recalled. “I felt extremely disappointed to know that the institution in charge of ensuring my safety did not recognize the massive distress the sexual assault caused me. Furthermore, I was disappointed that when I sought justice through their system, I was treated with hostility and disrespect. I was clearly not believed, and was often blamed for what had happened” (Webley, 2011).

College Board, The. (2012). What it costs to go to college. Retrieved from http://www.collegeboard.com/student/pay/add-it-up/4494.html.

Sieben, L. (2011, March 14). Nearly a third of college students have had mental-health counseling, study finds. The Chronicle of Higher Education. Retrieved from http://chronicle.com/article/Nearly-a-Third-of-College/126726.

Stephens, L. (2010). Reports reveal colleges with the biggest, smallest gaps in minority graduation rates in the US. Washington, DC: The Education Trust.