One of the most significant changes over the centuries has been urbanization, or the shift from rural areas to large cities. Urbanization has had important consequences for many aspects of social, political, and economic life (Kleniewski & Thomas, 2011).

The earliest cities developed in ancient times after the rise of horticultural and pastoral societies made it possible for people to stay in one place instead of having to move around to find food. Because ancient cities had no sanitation facilities, people typically left their garbage and human waste in the city streets or just outside the city wall (which most cities had for protection from possible enemies). This poor sanitation led to rampant disease and high death rates. Some cities eventually developed better sanitation procedures, including, in Rome, a sewer system. Still, the world remained largely rural until the industrialization of the nineteenth century. We return to industrialization shortly.

During the American colonial period, cities along the eastern seaboard were the centers of commerce and politics. Boston, New York, and Philadelphia were the three largest cities in population size. Yet they were tiny in comparison to their size today. In 1790, the year after George Washington became the first president of the new nation, New York’s population was only 33,131; Philadelphia’s was 28,522; and Boston’s was 18,230 (Gibson, 1998). Today, of course, cities of this size are called small towns. New York’s population is vastly higher, at about 8.2 million; Philadelphia’s is 1.5 million; and Boston’s is 618, 000.

US cities became more numerous and much larger during the nineteenth century because of two trends. The first was immigration, as waves of immigrants from Ireland and then Italy and other nations began coming to the United States during the 1820s. The second was industrialization, as people moved to live near factories and other sites of industrial production. These two trends were momentous: People crowded together as never before, and they crowded into living conditions that were often squalid. Lack of sanitation continued to cause rampant disease, and death rates from cholera, typhoid, and other illnesses were high. 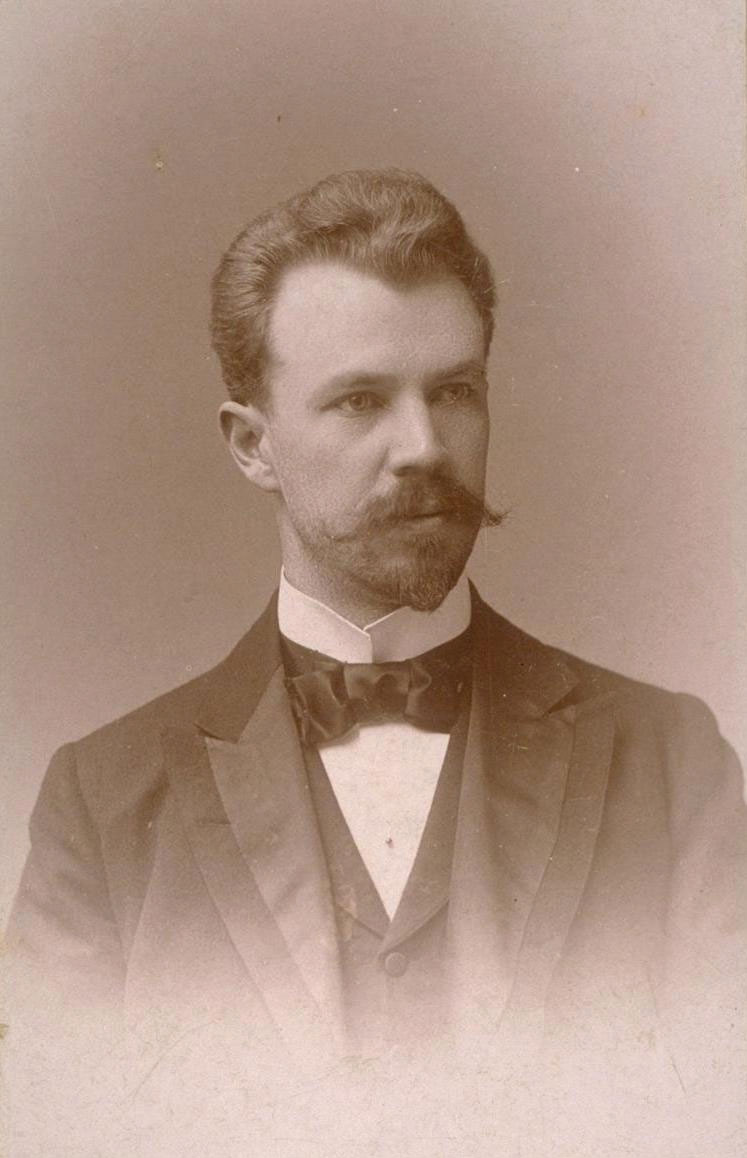 Muckraker Lincoln Steffens wrote a classic work, The Shame of the Cities, that criticized the municipal corruption characterizing many US cities at the turn of the twentieth century.

Crime also became a significant problem, as did riots and other mob violence beginning in the 1830s. This type of mass violence was so common that the 1830s have been called the “turbulent era” (Feldberg, 1980). Most of this mass violence was committed by native-born whites against African Americans, Catholics, and immigrants. Native whites resented their presence and were deeply prejudiced against them. During the three decades beginning in 1830, almost three-fourths of US cities with populations above 20,000 had at least one riot. This wave of mass violence in the nation’s cities led Abraham Lincoln to lament, “Accounts of outrages committed by mobs form the everyday news of the times…Whatever their causes be, it is common to the whole country” (Barkan & Snowden, 2008, p. 34).

American cities grew even more rapidly after the Civil War as both industrialization and immigration continued. By the early years of the twentieth century, US cities on the East Coast were almost unimaginably crowded, and their living conditions continued to be wretched for many of their residents. Their city governments, police forces, and business worlds were also notoriously corrupt. In 1904, Lincoln Steffens, a renowned “muckraking” journalist, published his classic work, The Shame of the Cities (Steffens, 1904), which was a collection of six articles he had written for McClure’s Magazine. In this book, Steffens used biting prose to attack the municipal corruption of the times in Chicago, Philadelphia, St. Louis, and other cities. In the original articles that compose the book, he named names: He listed by name people who gave and received bribes and those who were corrupt in other ways. A decade earlier, another muckraker, Jacob Riis, had published How the Other Half Lives: Studies among the Tenements of New York (Riis, 1890), a book of searing photographs of poverty in the largest US city. The books by Steffens and Riis remain as vivid reminders of what cities were like a century ago, and perhaps are still like today in some respects.

As Americans moved west after the Civil War and during the twentieth century, western cities appeared almost overnight and expanded the pace of urbanization. Continued industrialization, immigration, and general population growth further increased the number and size of US cities. Internal migration had a similar impact, as waves of African Americans moved from the South to Chicago and other northern cities.

Note that the populations of New York and Chicago show some decline after 1950. This decline reflects two other trends affecting cities in the past half-century: (1) the movement of people from cities to suburbs; and (2) the movement of Americans from northern cities to southern and southwestern cities. Reflecting this second trend, and also reflecting increases in immigration from Mexico and Asia, southern and southwestern cities have grown rapidly during the past few decades. For example, during the 1970–2010 period, the populations of Albuquerque, New Mexico, and Phoenix, Arizona, more than doubled, while the populations of Cleveland, Ohio, and Detroit, Michigan, both fell by about half (see Figure 14.2 “Population Change from 1970 to 2010 for Selected Cities”).

This trend in urbanization aside, the fact remains that the United States has become much more urbanized since its formation. Today, more than three-fourths of the US population lives in an urban area (defined generally as an incorporated territory with a population of at least 2,500), and less than one-fourth lives in a rural area. As Figure 14.3 “Urbanization in the United States (Percentage Living in Urban Areas)” shows, the degree of urbanization rose steadily through the nineteenth and twentieth centuries before slowing down by the end of the last century.

Today, more than half the world’s population lives in urban areas, and the number of cities over 1 million stands at more than four hundred. By 2030, almost two-thirds of the world’s population is projected to live in urban areas. The number of megacities—cities with populations over 10 million—rose from three in 1975 to sixteen in 2000, and is expected to reach twenty-seven by 2025 (Population Reference Bureau, 2012).

Despite all this growth, the degree of urbanization still varies around the world (see Figure 14.4 “Percentage of World Population Living in Urban Areas”). In general, wealthy nations are more urban than poor nations, thanks in large part to the latter’s rural economies. Still, urbanization in poor nations is proceeding rapidly. Most megacities are now in, and will continue to be in, nations that are relatively poor or desperately poor. The number of urban residents in these nations will increase greatly in the years ahead as people there move to urban areas and as their populations continue to grow through natural fertility. Fertility is a special problem in this regard for two reasons. First, women in poor nations have high fertility rates. Second, poor nations have very high proportions of young people, and these high rates mean that many births occur because of the large number of women in their childbearing years. 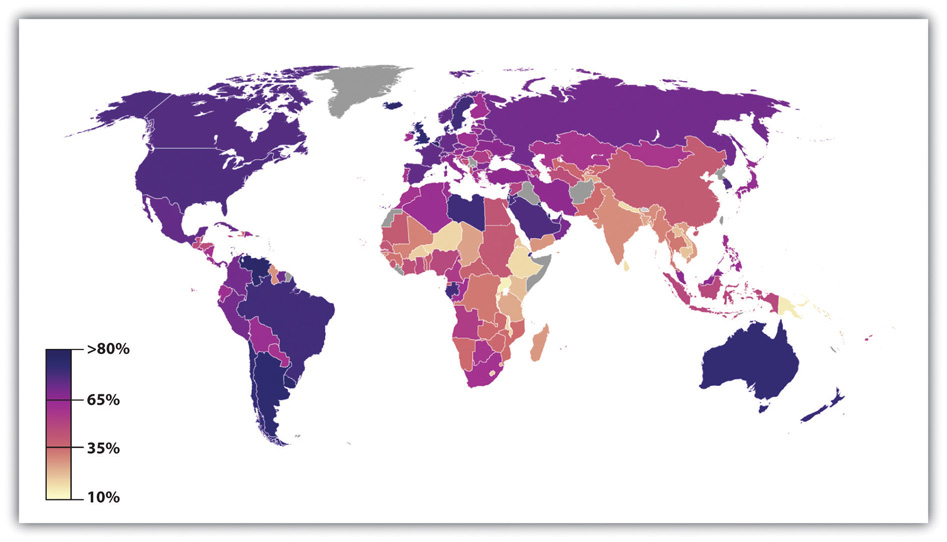 Rapid urbanization poses both opportunities and challenges for poor nations. The opportunities are many. Jobs are more plentiful in cities than in rural areas and incomes are higher, and services such as health care and schooling are easier to deliver because people are living more closely together. In another advantage, women in poor nations generally fare better in cities than in rural areas in terms of education and employment possibilities (United Nations Population Fund, 2011). 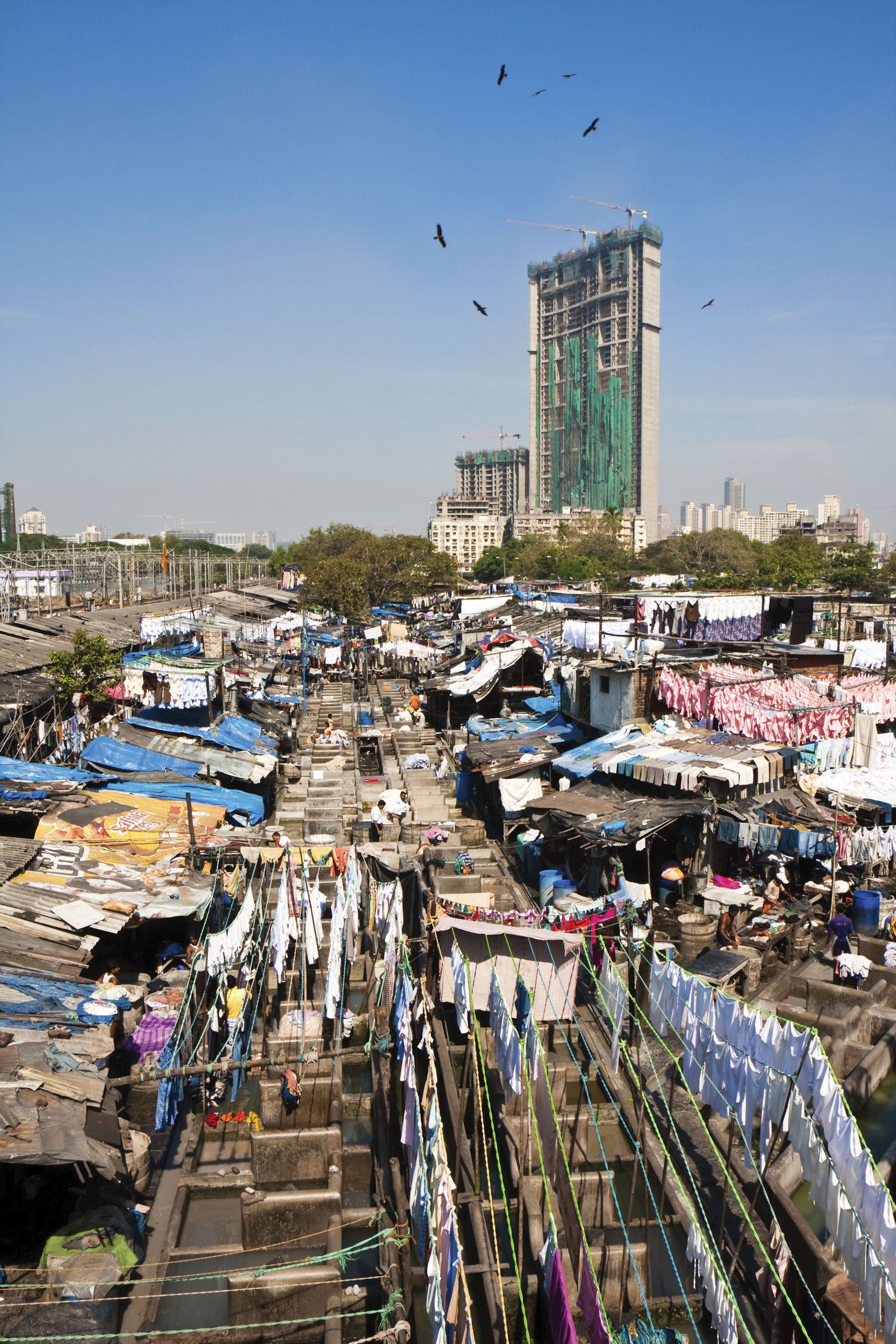 In large cities in poor nations, as this scene illustrates, many people live in deep poverty and lack clean water and sanitation.

But there are also many challenges. In the large cities of poor nations, homeless children live in the streets as beggars, and many people lack necessities and conveniences that urban dwellers in industrial nations take for granted. As the United Nations Population Fund (2007) warns, “One billion people live in urban slums, which are typically overcrowded, polluted and dangerous, and lack basic services such as clean water and sanitation.” The rapid urbanization of poor nations will compound the many problems these nations already have, just as the rapid urbanization in the industrial world more than a century ago led to the disease and other problems discussed earlier. As cities grow rapidly in poor nations, moreover, these nations’ poverty makes them ill equipped to meet the challenges of urbanization. Helping these nations meet the needs of their cities remains a major challenge for the world community in the years ahead. In this regard, the United Nations Population Fund (2007) urges particular attention to housing: “Addressing the housing needs of the poor will be critical. A roof and an address in a habitable area are the first step to a better life. Improving access to basic social and health services, including reproductive health care, for poor people in urban slums is also critical to breaking the cycle of poverty.”

Life in the megacity of Mumbai (formerly called Bombay) in India illustrates many of the problems facing large cities in poor nations. Mumbai’s population exceeds 12.4 million, with another 8 million living in the greater metropolitan area; this total of more than 20 million ranks Mumbai’s metropolitan population as the fourth highest in the world. An author who grew up in Mumbai calls his city an “urban catastrophe.” He continued, “Bombay is the future of urban civilization on the planet. God help us” (Kotkin, 2011). A recent news story illustrated his bleak assessment with this description of life in Mumbai: “The majority of Mumbai’s population now lives in slums, up from one-sixth in 1971—a statistic that reflects a lack of decent affordable housing, even for those gainfully employed. Congested, overcrowded, and polluted, Mumbai has become a difficult place to live. The life expectancy of a Mumbaikar is now seven years shorter than an average Indian’s, a remarkable statistic in a country still populated by poor villagers with little or no access to health care” (Kotkin, 2011).

Riis, J. (1890). How the other half lives: Studies among the tenements of New York. New York. NY: Charles Scribner’s Sons.