To begin our understanding of racial and ethnic inequality, we first need to understand what race and ethnicity mean. These terms may seem easy to define but are much more complex than their definitions suggest.

Let’s start first with race, which refers to a category of people who share certain inherited physical characteristics, such as skin color, facial features, and stature. A key question about race is whether it is more of a biological category or a social category. Most people think of race in biological terms, and for more than three hundred years, or ever since white Europeans began colonizing nations filled with people of color, people have been identified as belonging to one race or another based on certain biological features.

It is certainly easy to see that people in the United States and around the world differ physically in some obvious ways. The most noticeable difference is skin tone: Some groups of people have very dark skin, while others have very light skin. Other differences also exist. Some people have very curly hair, while others have very straight hair. Some have thin lips, while others have thick lips. Some groups of people tend to be relatively tall, while others tend to be relatively short. Using such physical differences as their criteria, scientists at one point identified as many as nine races: African, American Indian or Native American, Asian, Australian Aborigine, European (more commonly called “white”), Indian, Melanesian, Micronesian, and Polynesian (Smedley, 2007).

Although people certainly do differ in these kinds of physical features, anthropologists, sociologists, and many biologists question the value of these categories and thus the value of the biological concept of race (Smedley, 2007). For one thing, we often see more physical differences within a race than between races. For example, some people we call “white” (or European), such as those with Scandinavian backgrounds, have very light skins, while others, such as those from some Eastern European backgrounds, have much darker skins. In fact, some “whites” have darker skin than some “blacks,” or African Americans. Some whites have very straight hair, while others have very curly hair; some have blonde hair and blue eyes, while others have dark hair and brown eyes. Because of interracial reproduction going back to the days of slavery, African Americans also differ in the darkness of their skin and in other physical characteristics. In fact, it is estimated that at least 30 percent of African Americans have some white (i.e., European) ancestry and that at least 20 percent of whites have African or Native American ancestry. If clear racial differences ever existed hundreds or thousands of years ago (and many scientists doubt such differences ever existed), in today’s world these differences have become increasingly blurred. 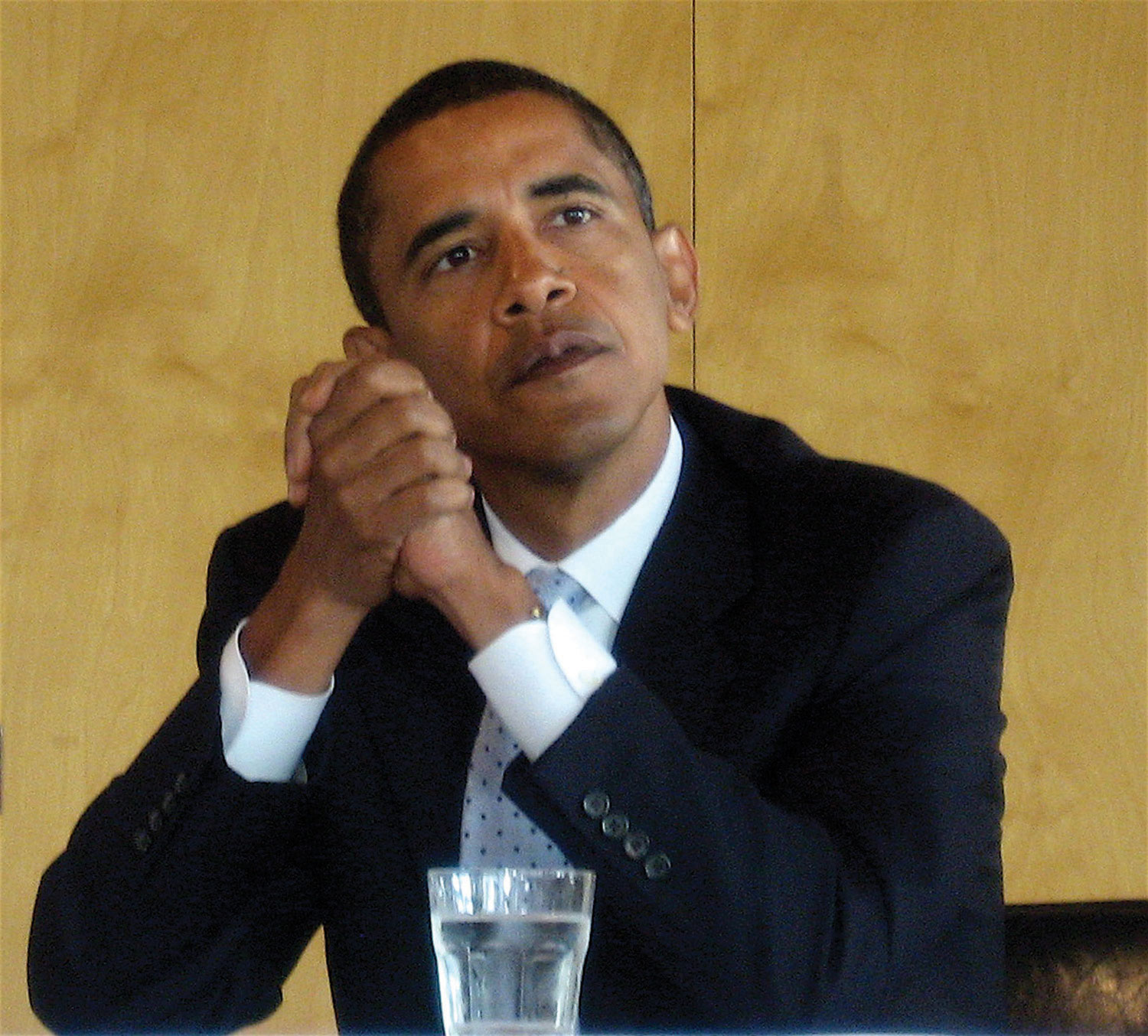 President Barack Obama had an African father and a white mother. Although his ancestry is equally black and white, Obama considers himself an African American, as do most Americans. In several Latin American nations, however, Obama would be considered white because of his white ancestry.

Steve Jurvetson – Barak Obama on the Primary – CC BY 2.0.

Another reason to question the biological concept of race is that an individual or a group of individuals is often assigned to a race arbitrarily. A century ago, for example, Irish, Italians, and Eastern European Jews who left their homelands were not regarded as white once they reached the United States but rather as a different, inferior (if unnamed) race (Painter, 2010). The belief in their inferiority helped justify the harsh treatment they suffered in their new country. Today, of course, we call people from all three backgrounds white or European.

In this context, consider someone in the United States who has a white parent and a black parent. What race is this person? American society usually calls this person black or African American, and the person may adopt this identity (as does President Barack Obama, who had a white mother and African father). But where is the logic for doing so? This person, as well as President Obama, is as much white as black in terms of parental ancestry.

Or consider someone with one white parent and another parent who is the child of one black parent and one white parent. This person thus has three white grandparents and one black grandparent. Even though this person’s ancestry is thus 75 percent white and 25 percent black, she or he is likely to be considered black in the United States and may well adopt this racial identity. This practice reflects the traditional one-drop rule in the United States that defines someone as black if she or he has at least one drop of black blood, and that was used in the antebellum South to keep the slave population as large as possible (Staples, 2005). Yet in many Latin American nations, this person would be considered white (see Note 3.7 “Lessons from Other Societies”). With such arbitrary designations, race is more of a social category than a biological one.

Lessons from Other Societies

The Concept of Race in Brazil

As the text discusses, race was long considered a fixed, biological category, but today it is now regarded as a social construction. The experience of Brazil provides very interesting comparative evidence for this more accurate way of thinking about race.

When slaves were first brought to the Americas almost four hundred years ago, many more were taken to Brazil, where slavery was not abolished until 1888, than to the land that eventually became the United States. Brazil was then a colony of Portugal, and the Portuguese used Africans as slave labor. Just as in the United States, a good deal of interracial reproduction has occurred since those early days, much of it initially the result of rape of women slaves by their owners, and Brazil over the centuries has had many more racial intermarriages than the United States. Also like the United States, then, much of Brazil’s population has multiracial ancestry. But in a significant departure from the United States, Brazil uses different criteria to consider the race to which a person belongs.

As sociologist Edward E. Telles (2006, p. 79) summarizes these differences, “[Blackness is differently understood in Brazil than in the United States. A person considered black in the United States is often not so in Brazil. Indeed, some U.S. blacks may be considered white in Brazil. Although the value given to blackness is similarly low [in both nations], who gets classified as black is not uniform.” The fact that someone can count on being considered “black” in one society and not “black” in another society underscores the idea that race is best considered a social construction rather than a biological category.

A third reason to question the biological concept of race comes from the field of biology itself and more specifically from the studies of genetics and human evolution. Starting with genetics, people from different races are more than 99.9 percent the same in their DNA (Begley, 2008). To turn that around, less than 0.1 percent of all DNA in our bodies accounts for the physical differences among people that we associate with racial differences. In terms of DNA, then, people with different racial backgrounds are much, much more similar than dissimilar.

Even if we acknowledge that people differ in the physical characteristics we associate with race, modern evolutionary evidence reminds us that we are all, really, of one human race. According to evolutionary theory, the human race began thousands and thousands of years ago in sub-Saharan Africa. As people migrated around the world over the millennia, natural selection took over. It favored dark skin for people living in hot, sunny climates (i.e., near the equator), because the heavy amounts of melanin that produce dark skin protect against severe sunburn, cancer, and other problems. By the same token, natural selection favored light skin for people who migrated farther from the equator to cooler, less sunny climates, because dark skins there would have interfered with the production of vitamin D (Stone & Lurquin, 2007). Evolutionary evidence thus reinforces the common humanity of people who differ in the rather superficial ways associated with their appearances: We are one human species composed of people who happen to look different.

Race as a Social Construction

The reasons for doubting the biological basis for racial categories suggest that race is more of a social category than a biological one. Another way to say this is that race is a social construction, a concept that has no objective reality but rather is what people decide it is (Berger & Luckmann, 1963). In this view, race has no real existence other than what and how people think of it.

This understanding of race is reflected in the problems, outlined earlier, in placing people with multiracial backgrounds into any one racial category. We have already mentioned the example of President Obama. As another example, golfer Tiger Woods was typically called an African American by the news media when he burst onto the golfing scene in the late 1990s, but in fact his ancestry is one-half Asian (divided evenly between Chinese and Thai), one-quarter white, one-eighth Native American, and only one-eighth African American (Leland & Beals, 1997).

Historical examples of attempts to place people in racial categories further underscore the social constructionism of race. In the South during the time of slavery, the skin tone of slaves lightened over the years as babies were born from the union, often in the form of rape, of slave owners and other whites with slaves. As it became difficult to tell who was “black” and who was not, many court battles over people’s racial identity occurred. People who were accused of having black ancestry would go to court to prove they were white in order to avoid enslavement or other problems (Staples, 1998).

Although race is a social construction, it is also true that race has real consequences because people do perceive race as something real. Even though so little of DNA accounts for the physical differences we associate with racial differences, that low amount leads us not only to classify people into different races but also to treat them differently—and, more to the point, unequally—based on their classification. Yet modern evidence shows there is little, if any, scientific basis for the racial classification that is the source of so much inequality.

Because of the problems in the meaning of race, many social scientists prefer the term ethnicity in speaking of people of color and others with distinctive cultural heritages. In this context, ethnicity refers to the shared social, cultural, and historical experiences, stemming from common national or regional backgrounds, that make subgroups of a population different from one another. Similarly, an ethnic group is a subgroup of a population with a set of shared social, cultural, and historical experiences; with relatively distinctive beliefs, values, and behaviors; and with some sense of identity of belonging to the subgroup. So conceived, the terms ethnicity and ethnic group avoid the biological connotations of the terms race and racial group.

At the same time, the importance we attach to ethnicity illustrates that it, too, is in many ways a social construction, and our ethnic membership thus has important consequences for how we are treated. In particular, history and current practice indicate that it is easy to become prejudiced against people with different ethnicities from our own. Much of the rest of this chapter looks at the prejudice and discrimination operating today in the United States against people whose ethnicity is not white and European. Around the world today, ethnic conflict continues to rear its ugly head. The 1990s and 2000s were filled with ethnic cleansing and pitched battles among ethnic groups in Eastern Europe, Africa, and elsewhere. Our ethnic heritages shape us in many ways and fill many of us with pride, but they also are the source of much conflict, prejudice, and even hatred, as the hate crime story that began this chapter so sadly reminds us.