As this chapter noted at the outset, the United States greatly reduced poverty during the 1960s through a series of programs and policies that composed the so-called war on poverty. You saw evidence of the success of the war on poverty in Figure 2.1 “US Poverty, 1959–2010”, which showed that the poverty rate declined from 22.2 percent in 1960 to a low of 11.1 percent in 1973 before fluctuating from year to year and then rising since 2000. The Note 2.19 “Lessons from Other Societies” box showed that other democracies have much lower poverty rates than the United States because, as many scholars believe, they have better funded and more extensive programs to help their poor (Brady, 2009; Russell, 2011).

The lessons from the 1960s’ war on poverty and the experience of other democracies are clear: It is very possible to reduce poverty if, and only if, a nation is willing to fund and implement appropriate programs and policies that address the causes of poverty and that help the poor deal with the immediate and ongoing difficulties they experience.

A major reason that the US poverty rate reached its low in 1973 and never went lower during the past four decades is that the United States retreated from its war on poverty by cutting back on the programs and services it had provided during that good war (Soss, et. al., 2007). Another major reason is that changes in the national economy during the past few decades have meant that well-paying manufacturing jobs have been replaced by low-paying service jobs with fewer benefits (Wilson, 2010). Yet this has also happened in other democracies, and their poverty rates remain lower than the US rate because, unlike the United States, they have continued to try to help their poor rather than neglect them.

Why does the United States neglect its poor? Many scholars attribute this neglect to the fact that many citizens and politicians think the poor are poor because of their own failings. As summarized by sociologist Mark R. Rank (Rank, 2011), these failings include “not working hard enough, failure to acquire sufficient skills, or just making bad decisions.” By thus blaming the poor for their fate, citizens and politicians think the poor do not deserve to have the US government help them, and so the government does not help, or at least not nearly as much as other democracies do. We have seen that the facts do not support the myth that the poor lack motivation to work, but that does not lessen the blame given the poor for being poor.

To renew the US effort to help the poor, it is essential that the actual facts about poverty become better known so that a fundamental shift in thinking about poverty and the poor can occur. Rank (Rank, 2011) says that one aspect of this shift must include the recognition, as noted at the beginning of this chapter, that “poverty affects us all” because it costs so many tax dollars to help the poor and because a majority of the public can expect to be poor or near poor at some point in their lives. A second aspect of this shift in thinking, adds Rank, is the recognition (following a blaming-the-system approach) that poverty stems much more from the lack of opportunity, lack of jobs, declining government help for the poor, and other structural failings of American society than from individual failings of the poor themselves. A third aspect of this shift in thinking, he concludes, is that poverty must become seen as a “moral problem” and as “an injustice of a substantial magnitude” (Rank, 2011). As he forcefully argues, “Something is seriously wrong when we find that, in a country with the most abundant resources in the world, there are children without enough to eat, families who cannot afford health care, and people sleeping on the streets for lack of shelter” (Rank, 2011). This situation, he says, must become seen as a “moral outrage” (Rank, 2011).

Sociologist Joe Soss (Soss, 2011) argues that a change in thinking is not enough for a renewed antipoverty effort to occur. What is needed, he says, is political protest and other political activity by the poor and on behalf of the poor. Soss notes that “political conflict and mass mobilization played key roles” in providing the impetus for social-welfare programs in the 1930s and 1960s in the United States, and he adds that the lower poverty rates of Western European democracies “are products of labor movements, unions, and parties that mobilized workers to demand more adequate social supports.” These twin histories lead Soss to conclude that the United States will not increase its antipoverty efforts unless a new wave of political activity by and on behalf of the poor arises. As he argues, “History suggests that major antipoverty victories can be achieved. But they won’t be achieved by good will and smart ideas alone. They’ll be won politically, when people—in poor communities, in advocacy groups, in government, in the academy, and elsewhere—mobilize to advance antipoverty agendas in ways that make politics as usual untenable.” 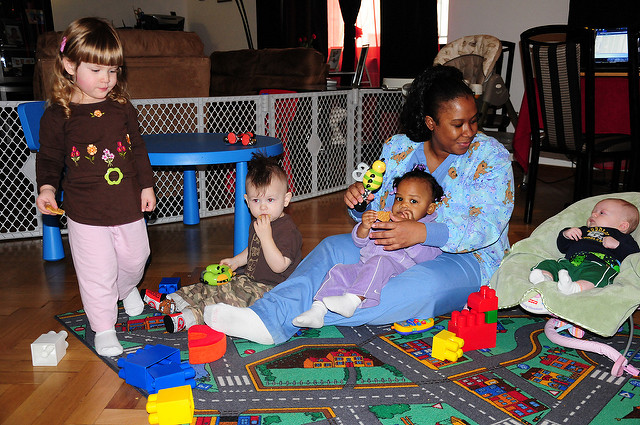 To help reduce poverty, it is essential to help poor parents pay for child care.

If a renewed antipoverty effort does occur for whatever reason, what types of programs and policies show promise for effectively reducing poverty? Here a sociological vision is essential. It is easy to understand why the hungry schoolchildren described in the news story that began this chapter might be going without food during a very faltering national economy. Yet a sociological understanding of poverty emphasizes its structural basis in bad times and good times alike. Poverty is rooted in social and economic problems of the larger society rather than in the lack of willpower, laziness, or other moral failings of poor individuals themselves. Individuals born into poverty suffer from a lack of opportunity from their first months up through adulthood, and poverty becomes a self-perpetuating, vicious cycle. To the extent a culture of poverty might exist, it is best seen as a logical and perhaps even inevitable outcome of, and adaptation to, the problem of being poor and not the primary force driving poverty itself.

This sort of understanding suggests that efforts to reduce poverty must address first and foremost the structural basis for poverty while not ignoring certain beliefs and practices of the poor that also make a difference. An extensive literature on poverty policy outlines many types of policies and programs that follow this dual approach (Cancian & Danziger, 2009; Greenberg, et. al., 2007; Iceland, 2006; Lindsey, 2009; Moore et al., 2009; Rank, 2004). If these were fully adopted, funded, and implemented, as they are in many other democracies, they would offer great promise for reducing poverty. As two poverty experts recently wrote, “We are optimistic that poverty can be reduced significantly in the long term if the public and policymakers can muster the political will to pursue a range of promising antipoverty policies” (M. Cancian & S. Danziger, 2009, p. 32).Cancian, M., & Danziger, S. H. (2009). Changing poverty, changing policies. New York, NY: Russell Sage Foundation. Although a full discussion of these policies is beyond the scope of this chapter, the following measures are commonly cited as holding strong potential for reducing poverty, and they are found in varying degrees in other Western democracies:

Years of international aid to poor nations have helped them somewhat, but, as this chapter has shown, their situation remains dire. International aid experts acknowledge that efforts to achieve economic growth in poor nations have largely failed, but they disagree why this is so and what alternative strategies may prove more successful (Cohen & Easterly, 2009).Cohen, J., & Easterly, W. (Eds.). (2009). What works in development? Thinking big and thinking small. Washington, DC: Brookings Institution Press. One very promising trend has been a switch from macro efforts focusing on infrastructure problems and on social institutions, such as the schools, to micro efforts, such as providing cash payments or small loans directly to poor people in poor nations (a practice called microfinancing) and giving them bed nets to prevent mosquito bites (Banerjee & Duflo, 2011; Hanlon, Barrientos, & Hulme, 2010; Karlan & Appel, 2011).Banerjee, A. V., & Duflo, E. (2011). Poor economics: A radical rethinking of the way to fight global poverty. New York, NY: PublicAffairs; Hanlon, J., Barrientos, A., & Hulme, D. (2010). Just give money to the poor: The development revolution from the global south. Sterling, VA: Kumarian Press; Karlan, D., & Appel, J. (2011). More than good intentions: How a new economics is helping to solve global poverty. New York, NY: Dutton. However, the evidence on the success of these efforts is mixed (Bennett, 2009; The Economist, 2010).Bennett, D. (2009, September 20). Small change. The Boston Globe. Retrieved from http://www.boston.com/bostonglobe/ideas/articles/2009/09/20/small_change_does_microlending_actually_fight_poverty/; The Economist. (2010). A better mattress. The Economist, 394(8673), 75–76. Much more to help the world’s poor certainly needs to be done.

In this regard, sociology’s structural approach is in line with dependency theory and suggests that global stratification results from the history of colonialism and from continuing exploitation today of poor nations’ resources by wealthy nations and multinational corporations. To the extent such exploitation exists, global poverty will lessen if and only if this exploitation lessens. A sociological approach also emphasizes the role that class, gender, and ethnic inequality play in perpetuating global poverty. For global poverty to be reduced, gender and ethnic inequality must be reduced.

Writers Nicholas D. Kristof and Sheryl WuDunn (2010)Kristoff, N. D., & WuDunn, S. (2010). Half the sky: Turning oppression into opportunity for women worldwide. New York, NY: Vintage Books. emphasize the need to focus efforts to reduce global poverty of women. We have already seen one reason this emphasis makes sense: women are much worse off than men in poor nations in many ways, so helping them is crucial for both economic and humanitarian reasons. An additional reason is especially illuminating: When women in poor nations acquire extra money, they typically spend it on food, clothing, and medicine, essentials for their families. However, when men in poor nations acquire extra money, they often spend it on alcohol, tobacco, and gambling. This gender difference might sound like a stereotype, but it does indicate that aid to women will help in many ways, while aid to men might be less effective and often even wasted.

Greenberg, M., Dutta-Gupta, I., & Minoff, E. (2007). From poverty to prosperity: A national strategy to cut poverty in half. Washington, DC: Center for American Progress.