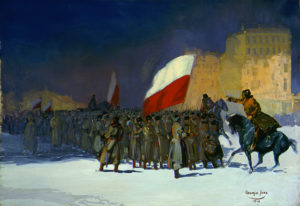 In this unit, we will examine the origins of the war and study how and why it spread so rapidly throughout the world. We will also evaluate the role that European colonies and colonized peoples played in the conflict. Finally, we will take a look at how European states attempted to maintain their colonial possessions through post-war peace agreements and how colonized peoples began to directly challenge European rule.

Called the Great War (before World War II came about), World War I was the bloody wake-up call that humanity was entering into a new stage of civilization. Really the defining conflict that took Europe from 19th Century Imperial states that saw heroism in war into a modern shape. Unfortunately, it had to go through World War II as well (that some would argue was due to imbalances created by World War I).