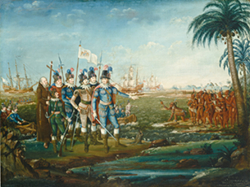 Week 4: Global Networks of Exchange in the 1600s

By the early 17th century, European merchants had established maritime trade networks across the Atlantic Ocean and eastward to India and China. These networks allowed them to acquire furs, tea, sugar, spices, and other luxury commodities that were in great demand throughout Europe. In the Americas, European settlers began using large numbers of enslaved Africans to grow labor-intensive crops such as sugarcane and tobacco for export to Europe. Portuguese, and later Dutch, merchants acquired many of these slaves from trade posts on the West African coast. Once the slaves had been sold in the Americas, merchants used the proceeds to acquire local commodities to sell in Europe. This circular trade pattern dominated the Atlantic economy until the 1800s. European nations closely guarded their trade networks against rival states. The Dutch East India Company, for example, possessed its own private army and navy, which it used to defend its trade links with India and Southeast Asia. Global trade altered production and consumption patterns throughout the world and led to the rapid growth and development of England and the Netherlands at the expense of older colonial powers such as Spain and Portugal. In this unit, we will examine the growth of global trade networks in the 1600s and evaluate the political, social, and cultural impact of these networks on the peoples of Africa, Europe, and the Americas.[1]